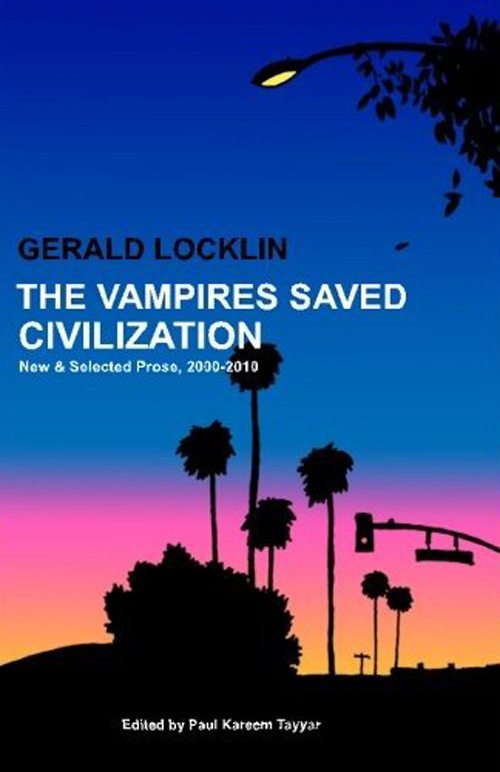 A collection of the Long Beach legend’s prose–fiction and non-fiction–from 2000 to 2010, with works dealing with 1960s Los Angeles, the legacy of Charles Bukowski, the simple pleasures of frozen yogurt and much, much more. A must read for Locklin fans and newcomers alike.

is now a Professor Emeritus of English at California State University, Long Beach, where he taught from 1965 through 2007 and continues as an occasional part-time lecturer there and as an occasional part-time lecturer in the Master of Professional Program at the University of Southern California. A profile based on a retirement event was broadcast on NPR and is archived. He is the author of over 125 books, chapbooks, and broadsides of poetry, fiction, and criticism, with over 3000 poems, stories, articles, reviews, and interviews published in periodicals. His writings are archived by the Special Collections of the CSULB library. Many early and rare works are available from waterrowbooks.com, amazon.com, abebooks.com, barnesandnoble.com, borders.com, eBay and other sites. He has resumed (with his son, Zachary Locklin) co-editing the poetry for the Chiron Review. He is listed in the usual literary directories. He publishes regularly in 5:00 AM, Ambit (London), Tears in the Fence (Dorset), Poetry International, New York Quarterly, Storie (Rome), Nerve Cowboy, Slipstream, Freefall, Coagula Art Journal, Quercus Review, Re)verb, The Iconoclast, Home Planet News, The Ragged Edge (online) and many other periodicals. He is available for readings, workshops, festivals (fees negotiable), and makes countless such appearances.