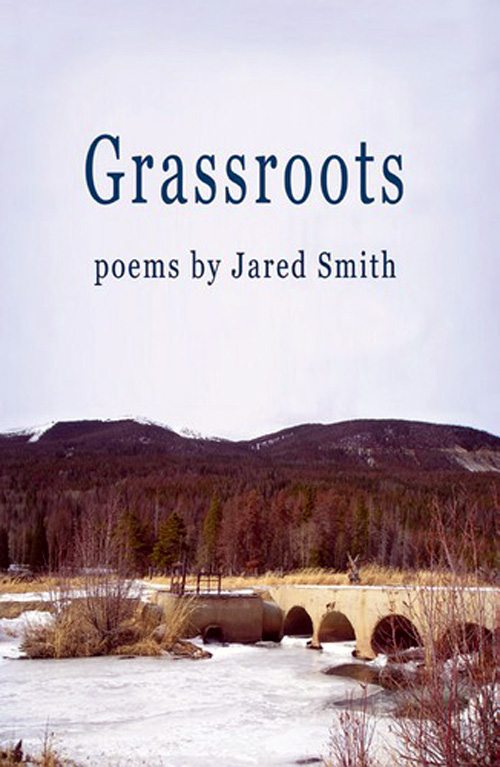 People, Not so Much

Every single one of them has a nose
lying right in front of the jaws,
telling them whether to slip a tongue
or sink the teeth into a face.
And way down at the other end
most of them have some sort of stump
that tells one what the nose thought,
as if you’d need a reminder by then.

True of mountain lions, poodles, deer,
rhesus monkeys, alligators, bears,
and a whole lot of things with furry hair.
People not so much, though. Sometimes
you have to unwrap them and probe
because with people the teeth can lie,
and the nose may make that little stumpy thing
something a bit bigger and harder to handle,

which is something you’d like to know about
to know maybe if the ends justify the means.

There is a lovely muscularity pervading Jared Smith’s work that’s reminiscent of the more obvious long-lined poets’ efforts, Whitman’s and C.K. William’s, for example. But Smith’s poetry is unique in that he seems, unlike these other two writers, not to think in terms of an “overflowing line” but to peer, consistently, beyond it. What this means is that while Whitman’s long lines are incantatory and Williams’ are loquacious in a relaxed, double-hexameter sort of way, Smith’s work, much like an Action Painter’s, serves the ambition of the gesture and thus, of necessity, stretches beyond the canvas. — Terri Brown-Davidson

Rhapsodic is a word applicable to very few poets today. Jared Smith is one—triumphantly so in Grassroots. And what powerful roots these poems are. Let me speak out clear and bold: in this superb collection of lyric poems…. Smith’s contemporary rhapsodic yawp [sounds] like Thor’s hammer over the boardrooms and the war rooms and the stock exchanges and the spires and domes of the world. Poetry might not make anything happen, but this poet knows what happens without it. Read him and be grateful. — George Drew, author of American Cool

With Grassroots, Jared Smith continues to explore human longing, sorrow, and resilience.… His content is singular, specific, concrete, but it always functions sublimely, pointing towards the grander cycles of Eros and Thanatos. Here is a poet deep with thought and rich with emotion. Grassroots is a compelling, haunting, and unforgettable collection, one that I’ll be revisiting and referencing for years to come. — John Amen, Editor of The Pedestal Magazine; author of At The Threshold of Alchemy

Smith casts a wide net that seines in diverse images from nature and domestic life that revitalize our sense of the wildness of our existence on this planet. I can think of no other American poet who can credibly carry us, in the span of a single line break, from buckets of cornflakes to trawlers filled with fish—and make that connection seem inevitable. — Allen Hoey, author of Once Upon a Time at Blanche’s and Stricter Means: Selected Earlier Poems

new about poetry written by people who aren’t happy with the state of contemporary society and therefore retreat to a rural hideaway of one sort of another. It goes back at least to Wordsworth, who was so disabused of English society, a ‘fen of stagnant water’ and the ability of the French to ruin a perfectly good Revolution (‘Now do I feel how I have been deceived…Faith given to vanity and emptiness’), that he hightailed it back to the Lake District and stewed about things for years.

‘The world is too much with us; late and soon/Getting and spending, we lay waste our powers,’ wrote Wordsworth from his lair by the lake in Grasmere, and ever since, we’ve had poetic prophets telling us, from their sacred retreats, how much happier they are away from it all.

Nothing wrong with that, of course, if you subscribe to the message yourself, and are told the message in language which is as contemporary and authentic to our time as Wordsworth’s was to his— with a reasonable level of modesty, of course, and providing that there’s no likelihood the messenger is going to turn into this year’s apocalyptic.

I’m one of those who likes the ‘head for the hills’ message well enough, and after reading Grassroots (Wind Publications, 2010), by Jared Smith, I’m pleased to say that the author passes my ‘scratch’ test on all the preceding counts.

With due attention to humility and without dampening enthusiasm for his message, Smith remains true to this essentially Romantic era notion, while adding in an intriguing eco-friendly concept in the poems which introduce and close the book — “Grassroots,” and “Virtues of the Grassfire.”

Like particular social orders, grass, he infers genially, is meant by nature to burn from time to time.

But the essential remains. The roots of grass ‘maintain their lives, dig deeper/and bloom again wildly when the spring rains come.’ Like prairie grass, says Smith, sometimes “all that is a man burns into a wind.” All, that is, except for that which essential — the ability to strip away the things of the corporate commercial world and rediscover the ‘one thing in common with every man woman and child’—a kabbalistic Divine Spark as it were, discovered in a myriad of places—from the history of union activist Joe Hill to the light that comes out of a glass of whiskey. Or

…lit up
With the reflection of windows no one looked out of
And the dull glaze of bricks getting mortared onto stone
And the sound of wind blowing aspens between stars.
(“Things to Say in an Empty Room”)

Noting rather cryptically in his ‘about the author’ comment that he has left corporate society—where he was adviser to White House Commissions and National Laboratories—Jared Smith reveals that he retreats regularly to ‘a rustic log cabin without television, radio or cell phone coverage’ in the foothills of the Colorado Rockies.

There’s plenty of distancing going on in the poetry too. By turns, Smith takes potshots at corporate society, bloated union workers, university professors, politicians and artists for losing sight of their essentiality.

Office workers are consigned to work in ‘cardboard cubicles’ and ‘sign time cards to account for time spent away from global trade.’ Creative Writing professors are forced to ‘be nice to children,’ and encourage them to write their ideas down ‘in such a way that it makes dollar signs on paper.’

Politicians are cold as a November wind that will ‘make you forget the flaming gold aspens.’ Teamsters, autoworkers, dock laborers and miners no longer recall Joe Hill, a ‘square guy who shot straight/and without him my kids wouldn’t have a chance of going to college.’

Poets, writers, opera singers and teachers’ little ideas to ‘tight skirts and bored eyes,’ and ‘lock a man’s songs and soul into jail,’ picking away at what is real and authentic through a supercilious process of academic snobbery; or become dulled through living every day of their life in a classroom where ‘people may be very smart but aren’t around/the block enough times to offer much new…’

These are complaints well told, as Smith hammers home his counter cultural affinities (‘I Buk the way Charles used to with my hole soul into beer/poured up out of some dark place deep in the bowels of society.’ ). But there is more to Grassroots than mere finger pointing. In numerous poems, he admonishes us to repudiate the smothering effects of corporate society and consumer culture. To find redemption and liberation in a life where ‘conversation turns to natural things and/nobody makes money ever because money doesn’t mean an exchange of thought.’

If this book is any indication, one would conclude that Jared Smith agrees with Wordsworth. The world is still too much with us, it seems —but quoting Robert Burns, Smith insists there’s one thing that remains clear: ‘A man’s a man for a’ of that.’

‘Take it in and fold it like a hobo’s/package as we trek across the coming America,’ says Jared Smith invitingly. The people will survive, he says—like prairie grass, if they pay heed to the message to be found in the likes of shimmering aspens and harvest moons. — Reviewed by George Wallace

George Wallace is author of nineteen chapbooks of poetry, including Poppin’ Johnny (Three Rooms Press, 2009). He is editor of Poetrybay, Poetryvlog and other publications.