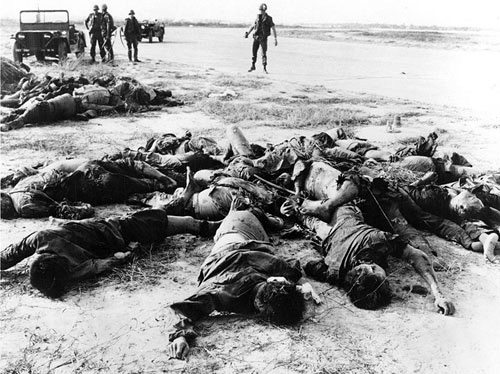 So Much Less Than Us

Most people (especially TV announcers)
usually talk about the war
In terms of our brave soldiers over there
Who have invaded somebody else’s country,

Hardly anyone thinks
Of the killed and wounded over there,
Or the damage we’ve done to them;
The towns and neighborhoods destroyed
The women and children killed
the people maimed and mangled.

Their lives worth so much less than ours;
When ours die
its a loss of good american lives
When theirs die
It’s just ’enemy dead’, or ‘insurgents killed’
Hundreds of their dead, that’s OK
But a handful of us, or even one—
why that’s a terrible crime against humanity;
Whole towns destroyed in revenge
The same old story;
the story of Imperialism
the native, invaded people
dehumanized, diminished
to nameless shadows.
So much less than us,
less than animals
Their lives like disposable flip-top cans
Reduced to statistics,
Collateral damage.