What Can You Make With Newspapers

art as product
an installation
bubble babble
you have an unusually
magnetic personality
ethic
keep on charging
the enemy
manipulate fate
expands a passage from the
Romans
of Europe is
one nationalism heretical
it is important
that I speak with you as soon as possible
so that the investigation may be
expeditiously completed
please telephone me
(collect if necessary)
at the number listed on this card
restfulness is a quality of cattle
the virtues are all active
jailblazers
calculating
glutton for clarity
269265
and
no. 4
things 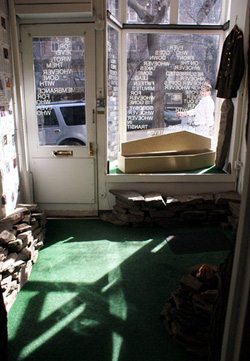 was born in New York City, but grew up in Los Angeles. He studied at Cal State College, Los Angeles, and UC Davis, where he had the opportunity to work with Richard Artschwager, Robert Arneson, and William Wiley among others. These experiences were the harbinger of his eventual work as an artist in Venice Beach. Brod resided in Venice Beach from the late 1960s through early 1980s, developing as an artist. During this period he also worked in the Juvenile Hall System of Los Angeles County as a credentialed teacher, an experience that had a powerful influence on his views and chosen forms of expression. Eventually, due to his knowledge of the detention system, he was offered a lectureship at the University of Washington’s College of Art in Seattle.

But it wasn’t until 1982 that Brod left Los Angeles. Brod sold his Venice studio, and went East to New York City, the city of his birth. He became a broker with his father’s firm, a New York Stock Exchange member, and eventually found himself at the helm of the firm as President and Chief Operating Officer.

Within the world of trading, public offerings and private placements, Brod discovered a creative excitement he had not anticipated. Though the people Brod encountered on Wall Street were of a different sensibility than the artists of Los Angeles, there was a thriving creativity behind the crunching of numbers. By the time of the 1987 crash, Brod’s firm had over one hundred employed brokers and five nationwide branches.

Brod worked on Wall Street for thirteen years, but after the crash, he began to rekindle his life as an artist, or, in his words, “[I] began to make things.” Although he had spent years in another vocation, the love and need for art that had been instilled in him as a student and young adult had not been extinguished.

“Artists are like cockroaches, they can never be stamped out,” Brod said, quoting Helen Frankenthal, in an interview on WKCR FM in the summer of 2009.

His new work included ceramic domes, poems, and the assemblage of collections “of stuff.” His artistic output during and after his career on Wall Street reflects a deeper investigation of the history and theories of art, an exploration that culminated in Brod’s decision to turn his attention exclusively toward the installation medium.

Brod’s current installation, Whoever Emerges, is the continuation of an earlier idea he collaborated on in the 1970s with his close friend Frank Brown. Brown envisioned, and put together, a traveling exhibit of contemporary sculpture, which he brought to neglected corners of the US–small towns where art is often unannounced and uninvited. When confronted with the task of naming the exhibit, Brown and Brod decided the title should reflect its intended audience, a random conglomeration of people from across the country. And in this way Whoever, the avatar, was born.

As an anonymous proper noun, Whoever represents any and everyone, a concept that resonated deeply with Brod. Whoever in Transit became the title of his late 1970s Los Angeles exhibition. Unlike his ceramics work of the past, this installation consisted of a large coffin, a dome, two chairs, a funeral bier, and an elaborate surfacing that acted as a painting on the interior of the storefront. Patrons were meant to view the installation from the outside: they could walk by, but could not enter. As an oddity along the Los Angeles beachfront, it challenged passersby to question what they were observing.

Around this same time, Brod began using poetry in tandem with the dome shapes that begun appearing in his work after his departure from ceramics. The dome as an image and object has commanded Brod’s attention for many years. Brod’s travels in Asia and the Middle East revealed the dome to be a ubiquitous and archetypal form: from the great Buddhist monument Borabadour to the Dome of the Rock, domes exist everywhere. Brod’s dome poems unite the aural and visual by giving physical shape to a textual concept.

Michael Brod’s current installation, Whoever Emerges, combines his interest in the symbols of life and death with the juxtaposition of visual and aural forms. This installation, inspired by the art and literature movements of the late 19th and early 20th centuries–namely the Italian Futurists, led by Filippo Marinetti, and the work of Guillaume Apollinaire, the pioneering painter-poet of the French Avant Garde in Paris–represent the next evolution of Brod’s work.

Much more on Michael Brod can be found by clicking here… 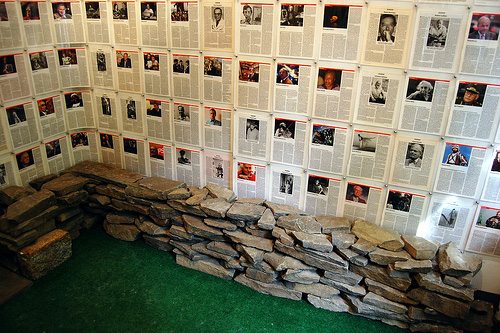