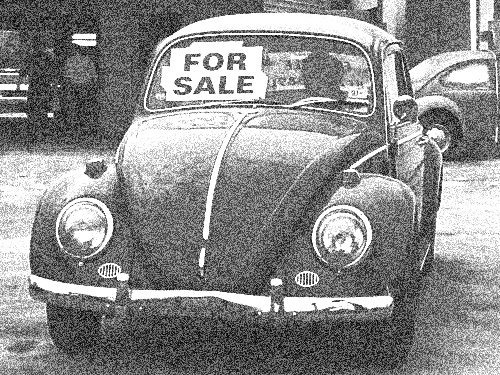 and i ask myself what is the greatest measure of one’s worth. and i answer myself that it is one’s own madness of love with life. as one is constantly madly in love with life. as one is intensely aware of this new consciousness. as one is immersed in the creativity of this newness. as one is a charge of lightning. another way of saying it is as one is creating poetry. and this poetry can be anything. my dad was a used car dealer and salvage yard owner in claremore, oklahoma. the sign in front of his place read: MAD MAN’S SA VAGE YARD. the “L” was missing. the mad man was savagely in love with life. cars were his poetry. wheeling and dealing was his poetry. he was mad. he was alive with wheeling, dealing, telling stories, cracking jokes in his original okie manner. someone once asked him why he was so obsessed with cars. and he answered that the first time he was in a car, he turned the key, the motor charged up, he gave it some gas, it started to move, and he thought, “WHOA! MAGIC! I CAN’T BELIEVE THIS!” and to this day, he said, he still gets the same miraculous feeling every time he gets behind the wheel of a car and turns the key in the ignition. cars were his poetry and his stories of wheeling and dealing, of taking his rigs to flood-damaged communities and purchasing flood-damaged cars, of his mechanics and customers who were characters, of the constant magic of mad man’s used car lot and salvage.

and i ask myself what is the greatest measure of one’s worth. and i answer myself that it is the ability to maintain that fine edge of intensity of mad love. a week ago, i had the greasiest of hamburgers, appleby’s sliders, hamburgers dripping with grease, chock full of onions, orange slider sauce, pickles, and washed down with blue moon beer. a monumental meal. so monumental that i ended up in the emergency room of parkview hospital in pueblo, colorado, so drained of fluids, that i was hooked up to intravenous glucose, so violently in pain that i was given a morphine drip, with a blood test that showed a white blood cell count so high that the emergency room staff wanted to admit me into the hospital because of food poisoning. but that is not the important part. the important part was the poetry of the emergency room staff, who immediately recognized the joy of washing down sliders with blue moon beer. they were interested in my survival, but they were also fascinated with the contrast of the joy of a greasy hamburger and beer and the absolute toxic force it can have on one’s body. they were contrasting the joys of the greasy hamburger with being so sick you are ready to write your last will and testament. for three hours they treated me and at the same time told me stories about sliders: sliders after football games, sliders before weddings, sliders on saturday afternoons, the magnificent poetry of the slider, which can give you ecstasy and can kill. from one to four a.m. the emergency room was filled with slider stories, the ultimate american meal, a gut-bomb so pure that it can give you utter ecstasy or put you in the emergency room. they couldn’t wait to get to appleby’s and take the big risk: washing down sliders with blue moon beer.

and i ask myself what is the greatest measure of one’s worth. and i answer myself that it is the insane passion of being madly in love with life. todd moore has hit his peak at 72 years old. he is james dean at 24. he is marlon brando at 30. he is humphrey bogart at 35. todd moore has captured the burning intensity of writing poetry, writing essays, writing fiction, writing autobiographical prose at the age of 72. the words fly off the page like bullets you are pleased to be hit with, because they produce the blood of mad love. he has outdone his hero, dillinger, for pure intensity of living, for pure intensity of the force of his words, for his words are more powerful than dillinger’s bullets, his persona is more powerful than dillinger, for dillinger only produced the outlaw gangster, todd moore has produced the literary outlaw. and he is endless. his words come in barrages, in blitzes, in massive storm waves of rhythms and images. he knows no boundaries. he knows no limits. he is caught in the eruption of an outlaw volcano that washes away everything in its path. he wakes up to dreams. he goes to sleep with poems. he has evolved into a force that obliterates everything in its path in order to produce the madness of poetry.

and i ask myself what is the greatest measure of one’s worth. and i answer myself that it is the enormous vitality of the consciousness of being madly in love with life. almost a year ago, the poet patrick mckinnon thought he was dying of a brain tumor. he phoned me and told me, that’s okay, he was ready to die. he had lived the life he wanted to live. i asked him if he was writing. he said no. i told him i was going to send him a check and what i wanted for my check was twenty poems. he said he thought he could do that. immediately he was on fire, writing his death poems, his life poems, his burning to live poems. poems about the greatest events of his life. poems about his seizures from the brain tumor. twenty poems written in the throes of death with an incredible last-ditch effort to burn with the passion of mad love. he wrote his way back to life. the operation which was supposed to kill him actually saved his life. the tumor was removed. and he has a new life. and he has not stopped writing with the passion of one on the brink of death, finding mad love.

coming slightly awake after total blackout
like blinking but only secondary chips of it
biting one side of my tongue right off &
hitting somehow the delivery truck brakes &
stopping 3 tiny feet from the half-frozen lake it
would’ve eaten that semi easily &
never given even the trailer back a
massive brain-tumor seizure on highway 2 at
45 mph even w/out traffic around me how that
truck didn’t tip or jack-knife when jumping that
curb didn’t falter down didn’t try to pass itself on that
football field hill to the sludgy ice that
undeniable slant toward chunky 34 degree water that
is bottomless in february is w/out forgiveness i
was running on full mercy you see i
was completely w/in the power of my spirit animal i
was ready to die i was ready to live i
was passed out for 20 minutes a
broken part of the steering wheel my
mouth spilling blood & a
fist-sized tumor as tho my bed had
been loaded w/death instead of
donuts 13,000 pounds trying to eat me alive like a
wonderful delivery-driver breakfast seizure-dumped into that
gnarly jagged toothed wisconsin shoreline

from THE SAVE MY LIFE BOOK, by patrick mckinnon, published by poetry harbor, 2010.