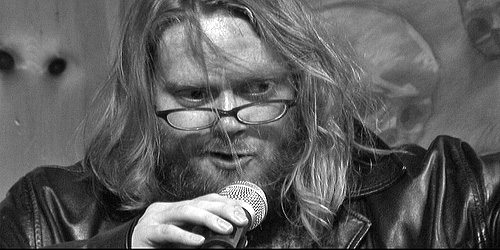 sweet nectar of chaos
bit into like a hungry snail
crawling in the dirt around an infinity track
eating the grass
try not to get mugged, rolled over, or crushed/
spiral-shelled by larger feet
there is a cosmic runner around our heads
whose footprints leave poems in our hearts
leaves of poems in our eyes that blind
the snails
who eat the grass around this track you run
where
you are in kansas
eating poems for midnight break-
fast?
& by that i
mean to say
on the other side of the earth i saw you write a poem about midnight
& it fell upon me
like the sound of your voice were something real
touching
& teaching
the other side of the world to be
a poet
by reading midnight poems
sounded on light beams of infinite
dude, until
i cdn’t help but listen
silent
& catchy jingles
you midnighted
my way you
always
so good at sharing

My background begins with poetry. My father, Larry Lake, was a Denver beat poet and publisher. Through his passion for poetry I was weened on the scene. I grew up listening to poetry at coffeehouses and city parks, some of the best unknown poets along with the Ginsbergs and Ferlinghettis. Of course I’m also a kid to the scene, born in 81 so I only caught the end.

The Denver scene my father knew was James Ryan Morris and the Mile High Underground of the late 60s. Morris came to Denver via Venice West & NYC. Never met him, but he & my dad were thick as thieves, and through him I gained my uncles & mentors, Tony Scibella & Frank T Rios both Venice West poets. Actually, the “family” & list of mentors is considerably larger…

I’ve been writing and reading poetry for some years, and I continue to learn & grow. The craft is the thing, and I take it seriously. Last night George Herms had a live interview open to the public that my wife & I attended. He recalled a wild idea he’d shared with Ginsberg after Ginsberg had been on Charlie Rose show, how the beats were a conservative cultural force. How they conserved the sacredness of the poem, the beatitude as a sacred rite, and the craft as the keeping of the flame. Alright, so I’m paraphrasing a bit. But I really dug the idea of beatniks as the keepers of the poetic tradition.

That’s a bit of how I fell in. I’ve also had my own adventures otherwise: a stint in the Marines – where I kept writing poetry, married in Hawaii to a girl I met doing community Shakespeare, college in Pittsburgh, & now living & working the dream in LA. Here’s a poem I recently wrote for a friend, John Dorsey, who is also a friend of S.A.’s. — Yama Lake | Date: Wed, 16 Jul 2008 18:14:15

Editors Note: Yama Lake send me this poem in July 2008 and for whatever reason it was lost and not published. Sorry Yama and John!