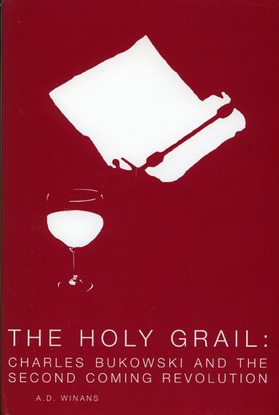 The Holy Grail
Charles Bukowski and the
Second Coming Revolution

Insider accounts of any industry offer a certain amount of titillation, but San Francisco native A.D. Winan’s “The Holy Grail” delivers that and a lot more as he recounts over 40 years inside the small press revolution as publisher of Second Coming Press and Second Coming Magazine.

“The Holy Grail” comes closer than any book yet published in showing how and why the small press revolution broke the iron clad hold of stodgy traditional publishers back in the early 1960s, enabling a whole new generation of radical and counter cultural writers to get their work before the public and, as in the case of Bukowski and others, to become outlaw artist celebrities on a par with rock stars. Winans reminds us that even publishers like City Lights (which first published Ginsberg) and Black Sparrow, began as small publishers. Bay Area readers will doubtless revel in Winans’ intimate gossip about dozens of our more outrageous local writers, especially the North Beach Beat and post-Beat gang – including Bob Kaufman, Gregory Corso, Lawrence Ferlinghetti, Jack Micheline, Harold Norse, and Kaye McDonough – that dominated the San Francisco literary scene, at least the sensational side of it, throughout much of the 1970s and 1980s. Most remarkably, for all the infighting among that gang, Winans writes of it in a very evenhanded manner, admitting hi own grudges but not taking time to grind his own ax.

As it all this weren’t enough for the price of admission, “The Holy Grail” also gives one of the most honest and compelling portraits of Bukowski yet in print, destroying almost every myth about him still current. The supposedly cantankerous, drunken, degenerate, womanizing Bukowski turns out to be a fiercely loyal friend who stands up for Winans in a battle between Winans and Ferlinghetti, despite the fact that Bukowski was seeking publication from City Lights. He graciously bows out when he discovers himself and Winans pursuing the same woman, and he even advises Winans to cut down on his drinking because in words we never expect to hear from the Buk – the “body asks for a bit of kindness.” — San Francisco Chronicle Review