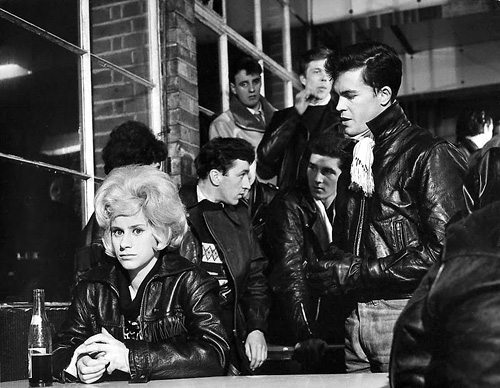 It was a hot July afternoon in Brooklyn. Doc’s ice cream parlor was all but deserted. Two giggling, blue jeaned, ten year olds with cute ponytails were checking out the jukebox, and four appropriately sullen members of the Egyptian Vipers were seated in their usual booth. Tony DiAngelo, the Viper’s president, was here, along with Charles “Smiley” Antonelli the war lord, and two other club members. It was a dull, cheerless, empty afternoon, and the youths were keeping themselves entertained by flipping through the stack of he-man, action magazines that Smiley had pilfered from a local magazine shop.

“Hey, look what just came in.”

Everybody looked up. Everything about the stranger spelled “college boy” – his neatly barbered crew cut hair, his button down, madras sport shirt, his freshly pressed chino pants, and his shiny penny loafers that looked brand new. No one dressed like that in this neighborhood, at least no one who was with it and didn’t want to get beat up every time he showed his face on the street.

The college boy walked over to the Viper’s booth. “Hi, fellas, my name’s Dave.”

“I’m working with the Youth Authority, and I’m just going around to get myself acquainted with all the kids around here.”

None of the Egyptian Vipers said anything. Ignoring the intruder, Smiley took out his comb and began combing his long, ducktailed hair. Everyone was waiting for Tony to take the lead.

“That’s great,” said Tony, grinning ever so slightly. The others in the booth laughed a bit. “My name’s Tony. Say listen, Dave/you ain’t one of them beatniks, are ya? I read about them beatsters in a book one time.”

Tony held up a well thumbed pulp magazine for Dave to see. The lurid, disturbing art on the cover showed some fiendish Nazis whipping half naked women. “Man, it was real terrible what those Nazis did to people, wasn’t it?”

“It surely was, Tony,” agreed Dave, a bit puzzled by the direction the conversation was taking.

“Well, yes I am,” answered Dave, trying to stay cool. In college, losing control of your emotions, letting the kids get you upset, was the one thing a youth worker was warned against over and over.

One of Dave’s professors had often told him–“These kids are just waiting, just begging for an excuse to hate you. Don’t give it to them.”

Dave tried to change the subject and get away from anything that might cause some kind of an emotional blow-up.

“The reason I came in here today, guys, is to tell you all about the new youth center on Third Street. I don’t know if you fellows know it, but we have all kinds of great programs for kids up there. Basketball teams, crafts, movies, and this Friday we’re having a big dance with a live band. Everybody is invited. Bring all your friends. It’s all free, guys, everything’s free.”

Tony was smiling again, but there was nothing friendly or reassuring in that smile. The emotional tension in the booth was starting to escalate. The other three boys had seen that look on Tony’s face before, lots of times before, and they knew what was going to happen next.

“Let me ask ya, somethin1, pal,” said Tony, “that joint you got up there, they leave Ricans in?”

“Well, yes, Tony. Everyone is welcome up there. That’s the whole idea, to help all kinds of kids get to know each other, and maybe that will stop all this gang fighting.”

“That’s great,” laughed Tony. “You let blacks in there too?”

‘Yes, Tony. I told you. Everyone is welcome in the center. We don’t keep anyone out.”

No one in the crowded booth said anything for a minute or so. The other Vipers kept staring at their president, waiting, waiting…..

Tony didn’t disappoint his stormtroopers. Suddenly the seventeen year old gang leader erupted. “You mother lover!” he snarled, the smile now vanished from his disturbingly youthful face. “The lousy Ricans come down here, ‘n beat up my best friend, ‘n you want me to go to a party with them animals. You must be crazy! And then the blacks-them zambos stomp one of my best boys, who isn’t even doin’ nothing, and you want me to sit around to watch them guys dancing with girls that live on my street. Get the hell outta here!”

The two pony tailed ten year olds weren’t giggling any more. They were just standing there, with their backs to the jukebox, staring wide-eyed and amazed at what the “big kids” were doing.

“I think I can understand how you feel, Tony, but…but….”

‘You don’t freaking understand nothing,” yelled the Viper’s leader as he waved his magazine in the air. “The Nazis were right, yeah Smiley, the Nazis were right. Every time there’s trouble, some Jew is causing it. You Jews gotta stick your big noses into everything.”

“You got that right, man!” agreed Smiley quickly. “In that crumby school I go to, I’ll bet sixty, maybe seventy per cent of all the teachers are Jews. And they’re the kind that are all the time getting on your back, ridin1 you, every day getting you into trouble.”

Tony gave his warlord a weak, playful punch on his arm, then he started laughing. But Tony’s laughter wasn’t the kind that people made when they were feeling relaxed and all warm inside. This wasn’t the laughter of someone who wanted to share his good feelings with his fellow man. Not hardly, Tony’s laughter was the disturbing kind that usually accompanied an angry sneer. When people heard laughter like Tony’s, they usually felt as if they were being prodded with the business end of a sharp ice pick.

“You get outta here, freak boy,” ordered Tony, as he successfully stared down this unwelcome intruder into their neighborhood, “and don’t ever come back.”

“Ya, blow ya punk,” growled Smiley, starting to get up off his seat.

From behind the counter, came the adult voice of reason. “Mister, mister,” pleaded Doc, with a worried look on his creased, gaunt face. “Maybe you better get outta here. These boys aren’t fooling.”

Dave knew a lost cause when he saw it. He also knew potential Jew-beaters when he saw them, so he turned around and nervously headed for the door.

As Dave stepped outside into the bright sunlight, Smiley had to shout out one last insult. “Have a good day, Izzy.”

All the Vipers started laughing now, and slapping their leader on his back. “Way to go, man. You really put that creep down hard.”

For this one afternoon at least, the neighborhood was still safe.