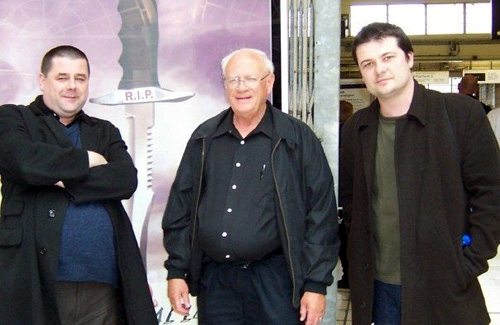 I had the honour

of hanging out with Todd Moore for a couple of days when he came over to London a few years back. All I really knew of Todd Moore was from the terse Dillinger vignettes that appeared regularly in Tim Wells’s Rising magazine. The poems seemed to scan the contents of a moment, much like a haiku, usually a violent one. If the moment wasn’t violent then it involved a brief chunk of time when something was said or done by a protagonist that cut through all the bullshit. His poetry was about action and movement rather than contemplation or navel gazing. It took no shit and it took no prisoners. There was no sermonising or hand wringing, just a pared down description of one moment following another and then vanishing forever. From his poetry, I expected a short fused, abrupt person that didn’t suffer fools gladly. While the latter part was certainly true I found Todd Moore and his wife Barbara to be warm, humble and gentle human beings, a delight to hang out with. This has often proved to be the case with poets, those that write the edgy, hard edged material tend to be very personable, while those that write the sermonising, hand wringing guff tend to be preening egomaniacs.

Moore chose Dillinger, or Dillinger chose him, as the vessel for his great American epic. The poem Dillinger has been published in rare instalments via books and chapbooks for the past few decades and was estimated by Moore to be over a quarter of a million lines in length. The fact that at least half of these lines consisted of two stresses or less doesn’t do much to soften that number. The style and the content chose each other, Dillinger was the light footed outlaw, the machine gun antihero who leaped over bank counters and was gone again in minutes. Moore’s style moves at breakneck pace, moments and memories flying by as the poem speeds onwards. 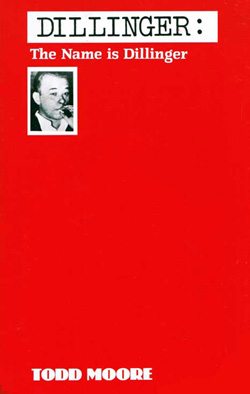 Moore commented on the short line style of his poetry in interviews. He said that the energy always escaped from the long line, but with short lines the energy had nowhere to go but downwards, to be channelled into the momentum of the poem. One doesn’t have to dabble in mysticism to understand this. The line break is all about the moment when the eye flies off the end of the line and draws itself back into the poem. The longer the line, the greater the momentum built up but also the greater momentum that gets lost when returning to the next line. Todd Moore found the way of building the momentum and keeping it, make the line short enough for the eye to take in at a glance so all it has to do is move downwards. Of course, in hindsight, the momentum gets lost in the page turn, but pages are longer than they are wide so the logic is sound. Perhaps the best way to take in the Dillinger epic is via the down scrolling e-reader, though the energy built up by that sonofabitch may be too much to bear.

During his stay in London, Todd read at an event alongside Hugo Williams and Phil Jupitus on the Friday and at my own venue on the Saturday. Todd read out a long Dillinger poem called Death Song, it was the first ever reading of this work and I was honoured to have it read at my venue. When he turned up on Facebook, I was very chuffed to see that Todd’s profile photo was taken a the Poetry Cafe, with the Cellar’s chalkwork behind him. Barbara later told me that it was one of his favourite career moments. That welled me up a little. The reading of Death Song has been up on The Cellar’s myspace page and will remain there for as long as Murdoch will let it. Unfortunately, the original recording travelled out of my living room window under the arm of a very small time Dillinger a few years back. So, because of the work of the small time crook and my lack of trust for big time crooks like Murdoch, I ripped the audio and you can listen to it right here, right now by pressing play on the player below. 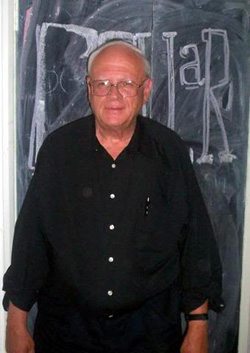 Todd’s death has illuminated many things for me, as has his life. His work points out another way to poets lost between the twin poles of performance poetry and academic poetry. By academic I mean the mainstream rather than the UK avant garde that seems to subsist off the teat of academia, with no community sustenance despite its Marxist proclamations. Otherwise we seem to be stuck between the wine circuit (prize winning poetry set on some verander on the continent in the company of someone terminally ill while eating an exotic lunch before someone says something profound in French) and the resurgent Spoken Word/Performance Poetry scene (“Look at all the problems of the world, I worry about them, love me, I have suffered profoundly, love me). Okay, I have greatly exaggerated two aspects of poetry, but I do so only to point out that there is another way, poetry that expresses the excess of life without having to prove its erudition or moral aptitude. Todd Moore called this the Outlaw way. We can cast a critical eye on this and point out that plenty of Outlaw Poets are guilty of a juvenile need to shock and a lack of editorial intervention, but Moore was not one of them. His work may have been vital and energetic, but it was also tighter than a gnat’s chuff. As the page/stage fissure seems to once again be appearing across the landscape of the UK poetry community, and factions are falling back on their old cliques and attitudes, I’m glad Outlaw pioneers such as Todd Moore have shown us that there’s always another path: your own. His spirit shall endure. — Niall O’Sullivan