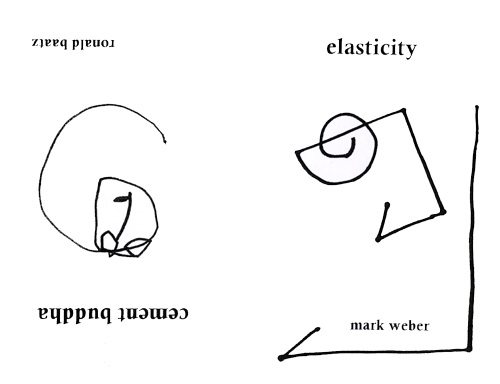 Mark Weber | elasticity – first printing – February 2011 – 400 copies – frontispiece photo by Janet Simon of author 6feb11 at Getty Museum, Los Angeles. Note: That quote in poem 12 is not actually attributable to Max Planck (Max is the first cat to poke around in quantum theory). This is Zerx chapbook No. 67. These poems written through the winter December into January and February 2011. All graphix and squiggles by MW. (c)2011 Mark Weber, Zerx Press, Albuquerque, USA.

Awake to whiteness
blanket of snow
the northern hemisphere tips away from the sun
howling swirls of snow dust
Nataraj, Lord of Dance, gyrates whirling
pure whiteness and quietude the city
is shut down, space folding, forsooth
I must venture out into it
my Tuesday morning yoga class
………..with Supriti, walk the walk
of Lukulishvara, King of Yogis, a distance
………..of one cosmic mile

When I first heard Chopin’s music, it was
the etudes, then the nocturnes, I was
mesmerized
for several years right out of high school
I worked in factories, and after such long
nights in the jazz clubs of Los Angeles, forsooth,
there is more cosmic truth in
a Charlie Parker solo than most of the poetry
…………ever written, I needed an alarm clock
to get me out of bed early in the morning
but I loathe those damn clanging rude barbaric
noisy dumb cartoon clocks, so, rigged a timer
to my stereo with Chopin on turntable
and that’s how I awoke all those years, delicately
and civilized, less jarring
than some mechanical bell
you might as well have a Rube Goldberg device
club you over the head or some maniac with
a bugle or that knucklehead who woke me in
the drunk tank in Barstow (long time ago, 1973)
to ask, “Are you going to eat your breakfast,
I’d sure like to have those pancakes,” and I
sure would have liked continue sleeping —
sleep being a great way to wait out your bail
from that horrid little town — but, at least,
he asked, most jails
I been in they’d simply steal your breakfast
AND your shoes

Alas, it is all a mirage
Illusory
Elastic 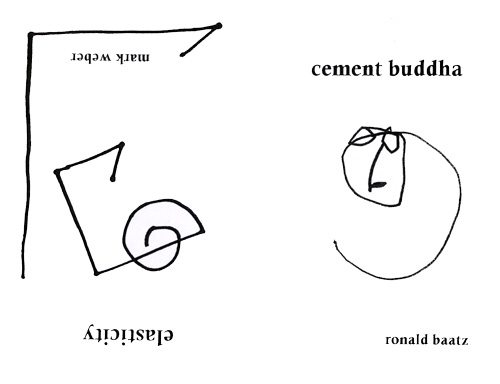 The wind has attached a piece of newspaper to
……the cement Buddha’s head.
Alone, I eat out of the iron frying pan using an apron
……for a napkin.
I feel like a cracked seed filling with grim evening light.
If I fall asleep with
……my pen, in the morning I’ll read the marks on the sheets,
……looking for the ordinary
……and the profound.

In the fruit bowl, the two brown pears appear to be
…..made out of clay.
Hedy’s insisting I help paint the kitchen.
And she claims that her one ear doesn’t hear, anymore,
…..what the other hears.
One hears the tiger’s claws falling through fire and flesh.
One hears snow rising to tops of trees where the branches
…..are blue.
My face appears worn, and my
…..eyebrows are sprouting wild gray hairs
…..which form arcs that stab at my forehead.

After watching a film in the barn with the landlord
……Hedy and I have a nightcap on the back porch.
Later there is another failed attempt at making love.
My excuses: the unceasing heat, allergy pills and
……existing on zero sleep.
She doesn’t bother to make any.
Later I watch her sprawled in sleep.
Her eyelids are of private concerns.