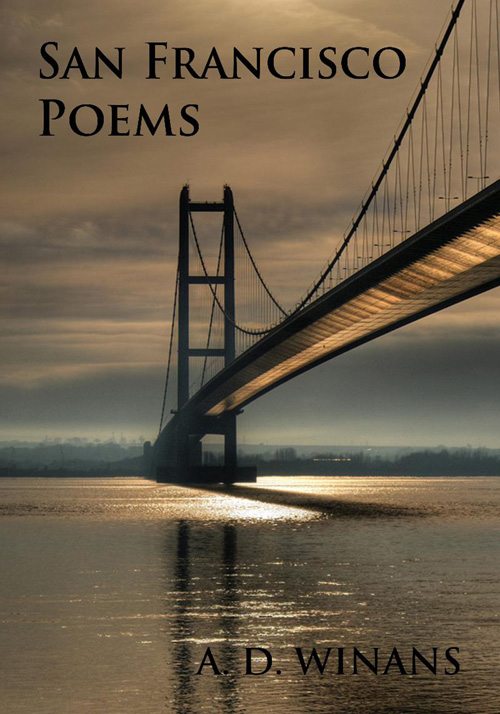 “A. D. Winans is the poet heart of San Francisco. He tells it like it was and is. This splendid collection of his nomadic movements through the city through the decades is like no other. His eye, sense of the observed detail, his empathy for the ruin and resurrection, is unique. The melancholia of the old days contend with sharp updated quick shots of the city on the move. A rich offering.” — David Meltzer

“A. D. Winans set his poet’s eye on San Francisco, native ground, with all the passion of a true elder in the art of poetry. Here are the sounds and sites of a city of poets, wonderfully knit. A reader will find the deep humors of San Francisco alive and well in the hands of a master.” — Neeli Cherkovski

“As a poet, A. D Winans is one of the best writing in the U.S. today. His work is powerful, human, humane and deals with primary issues.” — Hugh Fox

In his Introduction, Charles Plymell, writes:

Feminine force has sometimes been assigned to that beautiful City by the Bay, so it’s natural it undergoes periodical changes. It is sometimes forgotten that it’s a port, and, one it seems for every stormy life that landed there. A. D. Winans is the first person I know who was born in San Francisco. During my love affair(s) there, it seemed I lived on all her streets, climbed her hills and while high on top of Twin Peaks, marveled at her jewel-like lights strung on streets below. She is almost surrounded by water; a fact the poet Lew Welch often reminded me of. Fog could intertwine in the breath of sailors sipping martinis at the Top of the Mark, as I watched ships pass each other as lovers in the night, a reminder of the old Barbary Coast, or Mammy Pleasant building her neighborhoods through sex slaves and transients, newer captives with each experience a lifetime etched in memory. I certainly left my heart there, at least the presentiment that makes the heart see quicker than the eye. It demands an extraordinary vision to record this city. A. D. Winans has brought its inhabitants to life again for another look, however quick, however deep.

My sister, who died on the street there in front of an Indian bar was a transient, I was a transient, certainly the people of the tribes were transient as a Chinese lantern of the western moon, but the city always gave up its special feeling of home with all that implies. I met the Frisco Kid back east at a book convention some years later. It took until this day to realize he was a native to this city, and in his poems he identifies places he went as a child that I was to know later and stake a claim to the magical image that always changed yet remained steady.

As presentiment is to heart, sensitivity is to creativity and the transient nature of this most beautiful city became the fiction that shed periodically like the snakeskin, the lines of itself. Crooners claim to have indeed left their hearts there. Soul singers and philosophers worked on the docks. Jazz claimed it; Opera claimed it; Movies claimed it; Detective Novels claimed it; Rock and Roll claimed it (even built on it) Religious Vision claimed it; Madness claimed it; and yes Poetry claimed it! Even the Police claimed it. A. D. Winans lived it.

“His mind destroyed by shock treatments
And one too many police batons.”

It was always the large canvas artist forever recorded lines where the real and unreal blurred and sometimes struck. Winans warns,

There were/are many different kinds of poets who gravitated into that feminine energy. Like fish they traveled in two, even in schools, or more notably cliques. San Francisco was a natural basin for poets and was even known for destroying itself at times. When I arrived there, older poets I admired like Rexroth and Patchen were closing shop. On arriving in the city, Dave Haselwood, a fellow Kansan, gave me a copy of John Weiner’s Hotel Wently Poems (which A. D. Winans says was an influence on his own writing). It was during a short stay there that I had an altercation with a sailor and Neal Cassady in Anne’s room and would eat a rather naked lunch with Leary and Ginsberg below the hotel at Foster’s Cafeteria in “Polk Gulch.” Events in that city seemed linked, too, a fishnet never quite ending.

Rexroth organized the famous reading of Howl in the ’50s that led to the famous obscenity trial where Ginsberg’s vision of Marlon Brando, the Icon of the year, led to such hyperbole, even the best minds of San Francisco became forever obsessed. To this day, City Lights Bookstore enjoys the tourist trade from the publicity of the trial. While the author certainly didn’t “abandon” his moloch and had no reserve for taking thousands from ” Moloch the stunned governments,” it changed lives with such force as to create a Beatnik millionaire from a Navy officer and graduate of the Sorbonne, Lawrence Ferlinghetti. A similar institution arose in the Fillmore by another NYC city cat Bill Graham who saw fame in the old Palladium and plunged his vision to the depths of this city. To imagine being a poet who was born in and grew up in this city is to see a history that A. D. Winans records so accurately through his poetry.

While poets protested against money and government while building religious and sexual constituencies in visionary fervor, or became jaded, or “trippy” Winans kept his style. Jack Spicer frequented and conversed with Winans at Gino & Carlos. Jack Micheline, his friend, who had the chops, wanted to really turn over those ash cans of millionaire dollars seen prudishly by Ginsberg as “Filth! “Ugliness!” before the politically correct safe, academic mainstream took over. Turf also didn’t bother another of A. D. Winans’ friends, the late George Tsongas. Tsongas wasn’t a political poet, but he talked politics every day. I, like them, didn’t care for the labels. I could see as much in a Wyeth as in a Blake. The scene shifted again towards the Haight Ashbury (where A.D. Winans grew up a child). The Go-Go clubs flourished while Sonny Rollins played at North Beach dives for a two-drink minimum. At the old Avalon Ballroom I saw a handful of hippies turn out to hear an “unknown” Bo Diddley. Meanwhile, if one looked closer at Winans’ poetry, there were constants.

“I have observed old women
fumble in broken down purses
for non existent dreams.”

In the city where Winans was born, he grew up with those truths that were etched in faces that changed as well, but probably not what the tourists were seeing.

I don’t know if poets see differently than other folks. I have certainly been in the presence of some who missed what I saw, and I’ve certainly seen things I didn’t want to see. It’s obvious some poets are compelled to write what they didn’t want to see in the first place. That was the impression I had from Bob Kaufman, one of Winans’ companions, who took a vow of silence. 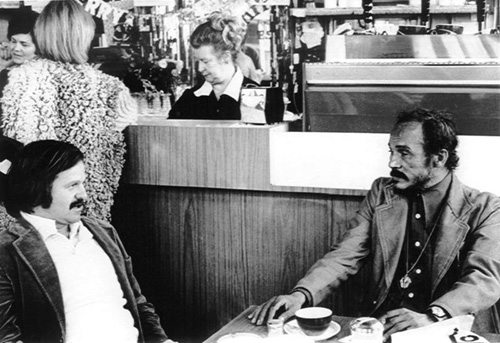 In San Francisco Poems Winans records a lifetime of the streets. They are photographic in that they can see a line in a face added by time, even the atavistic lines, that might cause one to avert one’s eyes. For his is the city of many poets, and as Robert Peters offered, “poetry munchkins.” So there is definitely turf. But Winans reminds us

“…that every meat packer
And fisherman, every waitress
And construction worker, knows more
About life than your average poet.”

I connect with Winans’ poetry in memories when I walked the streets south of Market down to the docks always in pairs, if not in groups, with our longshoreman hooks prominently displayed in our belts, for it’s an area a tourist would go at his peril, and poets, not that many. But Winans is one of them who did.

In these lines, Winans not only reveals the faces on the street, but the tragedy therein, where a transient, like Jack Black could find a home. Where the hoboes, hookers, “rounders,” and finally hipster poets came to the tenderloin, walked on Turk Street, and ate at Compton’s Cafeteria. Her history keeps sucking up the changes, the tragedies of every phony, every dreamer, every hero, and every loser. And Winans’ city is unique with the many poets it has embraced. Hart Crane didn’t have that situation in Akron. And within that change, that turf, that carnival, that mainstream of visionary-cum-academic, there is an importance to me that I claimed as my home, that space no matter the physical changes, there was the emotion of that space, the space Winans keeps occupied with his poems, that street where my epiphany is his and the poets he knew. It’s the hometown he saw both as a child and as a grown up, that very scene that must be read by its inhabitants, its tourists who run into the bookstore, or its poets who must live the boundless postcard, however briefly. 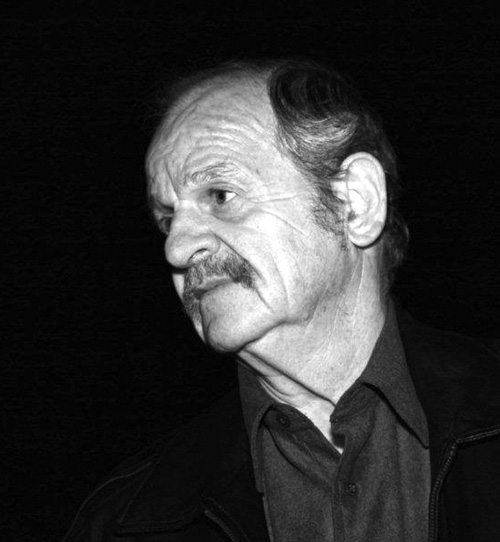 is a native San Francisco poet, writer and photographer. His poetry, prose, book reviews, and essays have appeared in over 1500 literary magazines and anthologies, including City Lights Journal, Margie, Rattle, Poetry Australia, the New York Quarterly, the Outlaw Bible of American Poetry, and the Beatitude 50th Anniversary Anthology. He is the author of numerous books and chapbooks of poetry and prose. In 2002 a song poem of his was performed at New York’s Alice Tully Hall. In 2006 he was awarded a PEN National Josephine Miles award for excellence in literature. In 2009 he was given a PEN Oakland Lifetime Achievement Award.