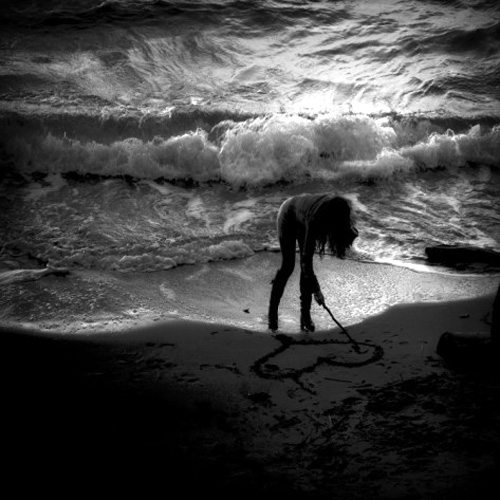 Just a sharp turn south, a quarter mile down
the rocks that slope to the water.
You know the good beach where haunted faces gaze
at the sallow bodies. The old tanned ones
stare at the slightly tanned queen who smiles
on her way to the spot at her appointed time
punctuated by oh ho ho’s and good morning Suzy.
She swings by, the towel held at the end
flapping lightly about her thick thighs.
The sand seems to linger among
her painted plumb toes and oh
the deeply tanned European bachelor up the way
who drives his 2000 Chevy pickup
bumpily down the dirt road from the two room cabin
filled with TV dinners, beer and islands of clothes
towels and shaving lotion
to the spot on the beach where he slicks back
thin black hair and clicks his
too early false teeth into place
walks across the street for a six pack and two
packs of Camel filters that won’t quite fit
in his white shirt pocket so he has trouble
making the right change with one hand
then he shuffles down to the beach again
eyes jumping at possibilities until
he sees her by herself rolling over on her blanket
like some huge sea lion oblivious to this
slowly stalking man who brazenly steps out of
nowhere but she sees him coming.
Down to the right you can step in and drown.
Some say there’s a whirlpool beyond the rocks.
The sun catches the ripples.
Snot-nosed summer kids step on other people’s
blankets and dogs hump your girlfriend’s leg
It’s cold hot dogs.
Babies get their fingers caught in
imitation grape soda cans while mothers
sign each other’s arm casts with the date
and tell unbelievable stories of motorcycle accidents
Yes, the door wasn’t closed on the car.
I didn’t know it until we made the curve out by Garbo’s
Ahhhh, this beach frolicking in sweat, bumps and smiles.