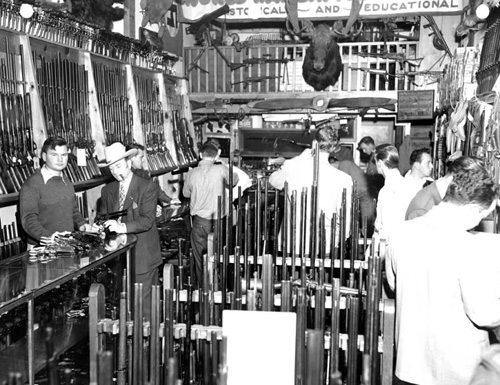 Watching people shop
in the local gun store
trying on various handguns for size
Can be a sobering experience
A lot of these people don’t look very smart
to know that they will be armed soon
Is a frightening thought!
Of course I’m right there in the store with them
But I’m different
I don’t have the same expression on my face
that they have
That looking for an answer look
all over so many of the faces
They think that gun
is going to do it for them
They never see
that the most potent weapons
the mind ………empathy
Political awareness ………….social consciousness
have been defused
and de-activated long ago
By the biggest brainwashing machine
in the history of mankind
The whole world shown through
a single corporate-military glass
the world their way
Repeated over and over
on every media imaginable
Most of the facts bent, twisted and muddied
Until any awareness,
Consciousness or compassion
Is slowly shrunken and shriveled
Atrophied and decayed
Until the mind
The most potent weapon of all
Has been rendered nearly useless
Social consciousness on life support
political awareness in the america
Reduced to a kind of living death
Like being trapped inside a body you can’t control
As it runs amok and destroys everything in its path
Powerlessness the main vibe
No matter what they say
That’s where the average citizen stands in america today
Powerless and unrepresented
It explains the looks on the faces
of the people in the gun stores
it explains the nature
of hearts and minds
of guns and bullets
Of weapons.

0 Replies to “Weapons by Ken Greenley”