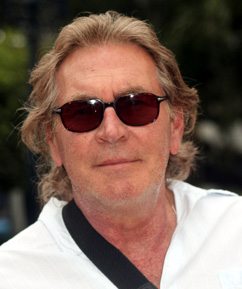 has been a presence in the ‘underground’ and small press since the late 1960’s, becoming part of the notorious Los Angeles poetry scene of the latter 20th century. Most recent books are “Eyestone” and “Next Exit: One” (w/ Bill Shute) from Kendra Steiner Editions, “Spiders And Madmen” (Scintillating Publications, 2006), and “Unoccupied Zone” (Pitchfork Press, 2004). Forthcoming from Kendra Steiner Editions “Next:Exit: Three” (w/ Misti Rainwater-Lites) and “Dancing On The Skids” coming out from Tainted Coffee Press in late 2007. His poems, short stories and plays continue to appear in a wide range of magazines, newspapers, broadsides, and online journals. Awarded PEN grants in 1987 and 1991.

He started writing as a teenager in Vincennes, Indiana and moved to Chicago where he worked at numerous things, including warehouse laborer and hotel room clerk, while he attended Chicago University (philosophy and creative writing) and the Fine Arts Academy (drama and theatre). A war time draftee, he served two years in the US army infantry during the Vietnam War era and became active in the anti-war movement, when he moved to Los Angeles in the summer of 1967, after his discharge. The jobs he held in L.A. would be far too numerous and absurd to list for the purposes of this short biography, but just to name a few: film actor, bartender/ bouncer, bookman, day laborer and part-time hippie. He attended Los Angeles City College on the G.I. Bill, where he studied filmmaking and anthropology. In 1981 he moved to Oregon, where he has lived for the last 26 years. Married, with four children and four grandchildren, he lives with his wife, Carol, also a writer.