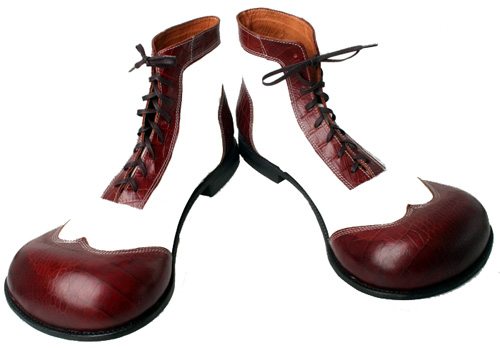 she was working in home depot
since the circus left her and town behind
she had those big floppy shoes on
like most clowns do
ya know, the kind you can get lost in
i seemed to be pickin up a vibe that she didn’t exactly like men
at this particular moment in time
i’m guessing another casualty of the ringmaster
whatever… we all know how those stories end
but home depot, clowns
that’s crazy time in the sub’s
and ya it’s true
i’ve always been a little tentative about clowns
they just seem so sinister deep down
like serial killer shit
but we talked anyway
she said she went to B.C.
and had pursued a law degree
but the circus, well that was her true calling
i’ll bet her parents were pissed about that one
anyway…
she was stuck in a rut as they say
she could have been another lawyer
but the circus, the other clowns
they were family
i thought to myself…
this girl needs some perspective… t.v. stat
if she would only
lose the nose, lose the makeup, most of all lose the shoes
at least she’d lose some weight
maybe then
she wouldn’t feel so bitter, so betrayed
so clown angry