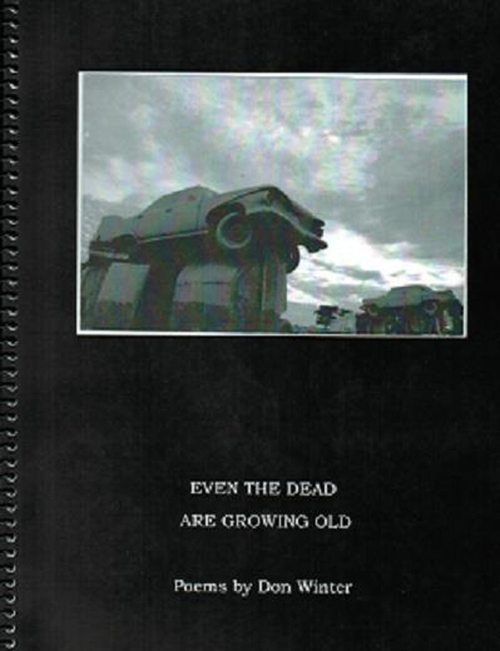 When dad died he’d hardly spoken
to mom for weeks. I heard
the muffled spatters of his need.
He’d start to touch her arm, grunt,
move off to arrange whatnots
on the metal shelf, like jigsaw pieces
of a life he could no longer fit together.
It had been his silence that had hooked her,
so like her father’s, though some mornings
she had trouble reading in this new version,
laid down her book & went to check
the macaroni, or stir the sauce.
Those final weeks she served him
dinner religiously at noon, ironed
even his underwear,
& when he tilted through the night,
her voice steadied him like a cane. Since he died
the bird feeder has sat empty.
She can’t bring herself to fill it
like he used to,
to let the birdsong he created back in. 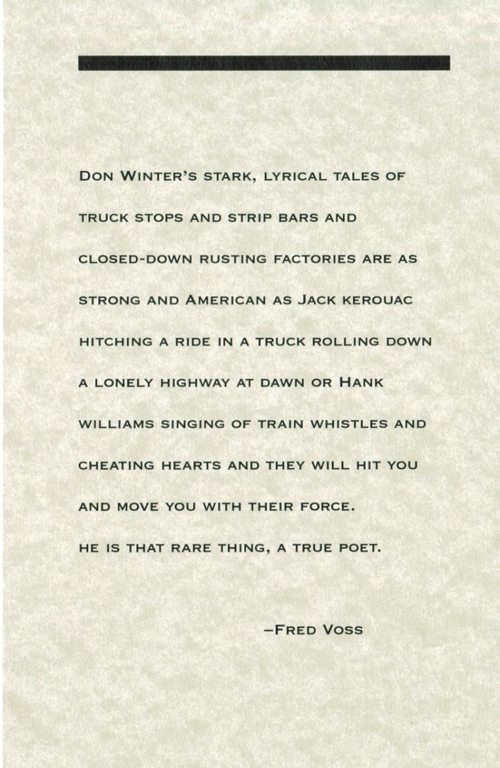 In Don Winter’s new collection Even the Dead are Growing Old, we are treated to “hearing the landscape tell the story,” a landscape of rough times, fast food, strip bars, and El Caminos. It’s pretty only in the Walker Evans’ sense that “sometimes ruin adds beauty,” but it sings with a voice hauntingly real and compelling. Walt Whitman would be pleased, because throughout Even the Dead we “hear America singing” loud and clear.

Winter’s language matches his material. It’s hard and flat and unforgiving, yet rich and evocative. Through his voice we’re brought into a world where we listen as “conversations rattle/like so much loose change” and we catch a “ribbon glimpse of rivers.” We feel “the shape of the wind” and hear how a “V-8 squalls under the jumping hood.” We see West Virginia miners whose faces have become “dim candles,” and at the conclusion of the stark and gorgeous “Left Behind,” we have “two mares, head to head, / shadows against the rising moon.” Winter’s world is one that we easily recognize, but because, like all effective writers, he forces us to see it, hear it, and, perhaps most importantly, feel it, we come maybe even a little closer to understanding it.

It’s not all bleakness here, though. “My Uncle Had Two Sayings” is a very funny poem about that certain kind of off-beat uncle we all remember with a smile and a roll of our eyes. “My Aunt Bids The World Adieu” will remind you of Richard Brautigan at his best, laugh out loud funny in a handful of perfectly chosen words.

My two favorites here are “My Dad’s Silence” and “Breaking Down.” The former brings home the heartbreak, the frustration, and the quiet nobility necessary for dealing with aging parents, an emotionally draining experience most of us eventually must endure. The latter echoes Raymond Carver with characters as battered as the cheap cars they drive, but, somehow, held together by who know what, they seem to keep going.

Singer/songwriter John Prine said he “wanted to write something so sad it was pretty.” That’s what Don Winter has accomplished here. His accomplished poetic voice in Even The Dead Are Growing Old is one, especially in these times, we need to hear and cherish. — Review by David Thompson

If you are interested in having a copy of this book please contact Dan Sheridan under dansheridanwspATyahoo.com or write to Working Stiff Press, Attention: Dan Sheridan, 741 Broadway St #1265, Niles, Michigan 49120