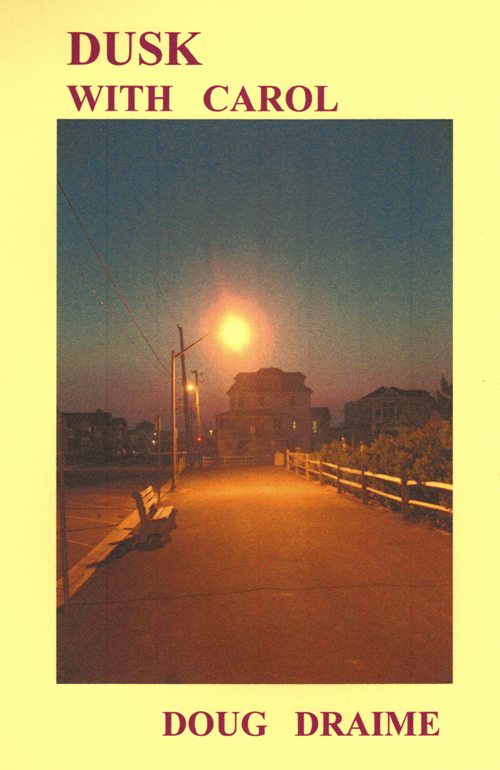 This new collection of 16 poems

from acclaimed West Coast poet DOUG DRAIME, who has been publishing with KSE since our earliest days (Doug was the first author I approached who was not already a friend or a friend-of-a-friend), has been a long time coming. Doug and I had talked initially about doing a collection of love poems, but later felt that the love poems would have more impact if they were peppered throughout the collection, the way love is peppered throughout life—-we have many other immediate needs and responsibilities, but love stays in the background much of the time, rearing its head on occasion for those ecstatic moments that make the other moments tolerable. So keeping the four key love poems, we sifted through about fifty other recent pieces of Doug’s and selected twelve others in different styles and on different themes to provide a rich and diverse collection.

Always an eclectic poet, Draime ventures into political protest (The Night Before), existential epiphanies from the trenches (Dancing On The Skids), haiku-like crystals of insight (Summer Night), meditations on language (Mount Ararat), slowed-down and extended moments frozen on the end of the poetic fork (Most Days), post-Ginsberg shamanic list-poems (A World Without Me Crawls and Staggers…), hyper-real slices of the daily life (Nervous Man), visionary post-Blake, post-Beat pieces like “Lost,” and closing with the haunting, elliptical title poem. It’s a strong collection from one America’s most essential poets, and at 14 pages, it’s the longest-ever KSE poetry chapbook. dusk with carol

like a scream of a foaming Colossus
a picture of hammering sound
a laughing, dancing crowd without a center
a floating red door with big red bullet holes
a maze of perfect snowstorms
a crease folded through the streets of Cleveland
a monkey with the face of Nero
a floor that has no bottom
a cloth of stones, blanket of splinters
a madrone tree spurting from a cloud
a tender moment caught in a steel trap
a preposterous flag waving for blown apart bloody bodies
a breathing, murdering Mind denying it is
a camel running backwards in the halls of Congress
a dotty child older than his great-great grandfather
a fragment from a fragment from a fragment from
an impossible death that has no home in anything
that lives

Though not born in L.A. (he came to the city in the sixties) and no longer living in L.A. (he relocated to Oregon in the late 80′s), DOUG DRAIME made his mark as an L.A. poet, and his 20+ years in L.A. colored him as a person and as an artist (for the pure form of the L.A. Draime, check out his LOS ANGELES TERMINAL POEMS collection). His move to Oregon has been healthy for both the man and his work, and the zen-calm and the righteous anger sit well together in the beautiful Northwest.

is the 9th KSE chapbook from this legendary West Coast poet, a man who for 40+ years has been the model of the independent underground poet. After coming back from Vietnam and locating in the Los Angeles area, Doug threw himself completely into the psychedelic culture (some of his visionary 1968 mescaline-fueled poems are found in the long out-of-print KSE #87, LAST MAY, now a major collectable) and then the L.A. street culture, of which he was/is one of the foremost chroniclers, until his relocation to Oregon about 20 years ago. I started reading his poetry in underground and leftist magazines/newspapers back in the 70′s and was always on the lookout for his work. We’ve worked together closely for a number of years now on our many KSE projects. Doug is also a perceptive reader and critic of KSE chapbooks, and he’s provided some insightful comments/perspectives on my own poetry chapbooks and those of other KSE authors. As a poet, he’s a master of any number of forms, and unlike many of his contemporaries, each of his poems uses a form that is unique to and necessary for that particular piece. Although I could choose any number of “best” poems from Doug, I cannot really choose a “typical” poem. And that’s one reason why I am still reading his work closely and excitedly after 30+ years as a Draime reader. He knows the literary tradition from Catullus to Keats to Corso and beyond, providing him with a technical facility that’s so deep it’s become second nature and never calls attention to itself….he’s never been one for games or pretentiousness, another lesson learned during the years as a battle-scarred working-poet on the mean streets of the City of Angels.

(KSE #250) is a collection of new work from Doug, sequenced into a well-paced, eclectic, and exciting read. The rich particulars, the zen calm and then the righteous anger, the experimentations in form, the resonant images, the spiritual presence—-it’s all here, and it’s classic Draime. Also, it features a beautiful original cover photo by Wyatt Doyle (of New Texture), complementing the poems. Be sure to get this new chapbook, a hand-numbered and hand-assembled edition of 99 copies, before it’s gone.