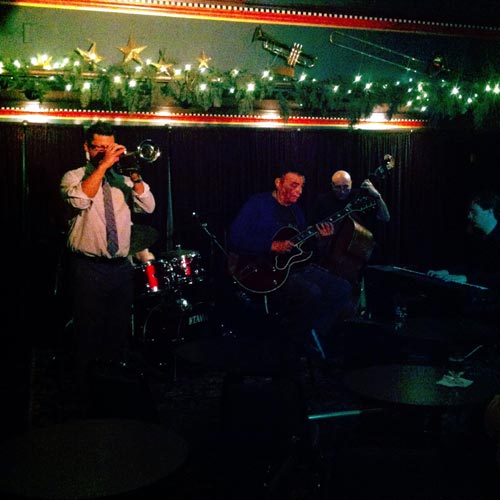 Chronicles of the Cool Jazz Cat: A Visit from God

There is a blue hue to the night…like a blacklight smothered in dark cotton. A comfortable, not menacing glow…a perfect night for jazz.

I arrive at the club and can sense the presence of the Cool Jazz Cat in the hidden nook in this jazz club located in a forgotten corner of the city. I see a glass of deep red port that is several sips shy of a full serving, indicating he’s been here awhile. “You’re early,” I say. Although it’s too dark to see him, I sense a head nod.

Coltrane plays on the sound system as I watch the quartet make final adjustments before they play. A spotlit empty stool sits in the middle of the dim-lit stage with a battered hollow-body jazz guitar and a small wooden pedestal drink table large enough for one glass.

The lanky bass player lays down a beat that is difficult to discern at first. Like distant thunder, it’s not clear what’s being heard until the brain processes it. Out of the corner of my eye, I see the old guitarist ambling his way to the stage riser. He’s escorted by the young blonde-hair waitress wearing a black cat suit who waits for him to take his perch and then respectfully places a crystal tumbler filled with gin on the small table.

He is ancient and could easily claim to have invented jazz. As far as he’s concerned, he did.

The Cool Jazz Cat slips me a folded sheet, which I open to his fountain-pen scrawl: G O D. He is a jazz god. And like all old gods, he’s cranky, impatient, and less perfect than he used to be. Still, he plays exquisitely but the frenzy is gone.

He’s more relaxed, which matches the night. It also matches the needs of dark, moody Esteban and alluring Alicia, actors from the avant-garde. They melt into their chairs and exhale aaaaaaahhh smirks of satisfaction.

The waitress leaves Esteban and Alicia, floats to me, and whispers seductively, “They think you need an 18-year-old,” as she deftly slides a snifter of aged Jameson toward me.

I nod my gratitude to the thespians and say, “Delightful… a teenager that will lighten my burdens and warm my heart.”

The old guitarist leans back, eyes closed, as he fingers his mellow version of Wes Montgomery’s Round Midnight. His drummer brushing the rhythm is supported by the upright bass with occasional accents from the tenor. The well-ordered plan of jazz interplay is followed. I sip my old whiskey, hear the Cool Jazz Cat tapping the rhythm on his goblet, and smile in appreciation knowing that my enjoyment—as well as everyone else’s in the club—is the jazz guitar god’s best pay.

0 Replies to “jeffrey winke | chronicles of the cool jazz cat: a visit from god”