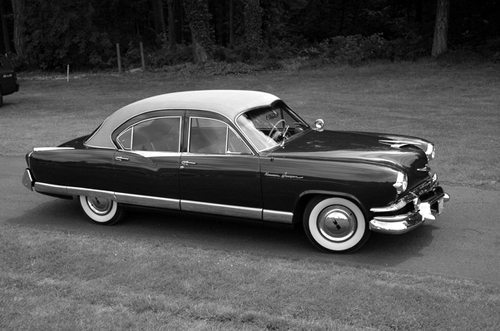 “The lame shall walk except for ducks who shall swim, right over the dam into the mouth of hydroelectricity.”

No wonder I could never get a date in high school, talking like that and driving a Kaiser, a car so unhip it left the other guys speechless when I pulled into the high-school parking lot that first day and stood on the hood babbling about dark riders and camphor balls.

Then one day a guy named Boozie who worked the factories and was called Boozie because he drank a fifth of whiskey and two six packs a day and who spoke in monosyllables and double negatives and drove a Ford coupe with so much engine under the hood there was no hood, just an engine that erupted all chrome and precision out of the dark pit between the front fenders, one day Boozie challenged me to a race on Snake Road.

Snake Road was a strip about three miles long that ran between Highway 6 and Cove Road, called Snake Road because except for a hundred yards of straightaway on either end, it was nothing but curves.

I’d been going around talking about what a low center of gravity the Kaiser had, there wasn’t a street car out there except maybe the Porsche that could take it on the curves, and Boozie walked straight up to me in the burger joint where all the high-school kids hung out and said, “Snake Road. Sunset. Twenty bucks. Eat my dust. ” Then he walked back out again.

“The devious mind of the trickster,” I proclaimed from where I sat leaning against the wall in my chair. “Boozie and his duplicitous shenanigans.”

“Whatever, Shakespeare,” someone said. “Boozie is fucking crazy man, and he’s got the hottest set of wheels this side of Hartford.”

For once I kept my mouth shut and just smiled. I knew what Boozie was up to. He knew I spoke the truth about the Kaiser–he was banking on that first hundred yards of straightaway. He’d leave me behind on the straightaway and when we hit the curves there’d be no way for me to get around him on the narrow two-lane blacktop without risking a head-on collision with whatever might be coming around the curve from the opposite direction.

“Life could be a dream,” I said when I handed my twenty to the girl who was holding the bet money, and she smiled and said, “I knew it. I knew you were hip and just putting us all on with that funny talk of yours. Here’s a kiss for luck.” She slid her tongue into my mouth and pressed her tight-sweater breasts against me.

I knew what she was thinking. She was thinking I was alluding to a line from Sh-Boom, a song by The Overtones. “Life could be a dream, if I could take you up in paradise up above…” Which wasn’t the case at all. I really meant life might just be a dream.

“After the race,” I said. “You and me. In the grove of apple trees off Canyon Road, in the Kaiser.”

I was talking like Boozie. The kiss and the breasts did it to me, clouded my mind, affected my speech.

“Only if you win,” she said with a cruel smile, and walked away.

Boozie pulled away from me on the straightaway alright, but I caught up with him about a half mile into the curves, and then I pulled alongside of him. We went thru a series of curves neck-and-neck, glancing over at each other, and then Boozie saw it in my eyes–I didn’t care if I lived or died. He backed off, and I pulled in front of him and took the remaining curves at breakneck speed so he wouldn’t be close enough to overtake me on the final straightaway.

It was probably the most significant day of my life. I won the race, got laid in the back seat of the Kaiser, and got a good look at who it was, buried alive in the wreckage of all those twisted words that kept pouring out of me.