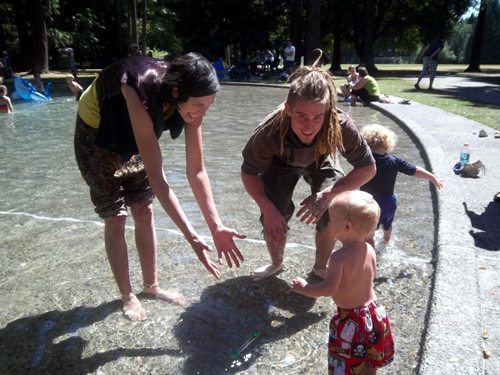 I just ripped a sheet out of a yellow pad, crumpled it and tossed it. That’s a first. Usually I can have a swarm of conflicting feelings and thoughts going on simultaneously and compress them into a tight string of words, but today it’s not happening. Maybe it’s due to weeks of long hours working in the hot sun, or maybe it has to do with last weekend in Seattle with my sister and her husband, with my granddaughter and Pan and their son Francis, with nephews and nieces and their wives and husbands and beaus and my nephew’s baby Colin–a family bouillabaisse.

My granddaughter’s son, my great grandson, is a year old, and my nephew’s son is about seventeen months, but they’re from different generations. I’m 75 and seventeen years older than my sister, 74 years older than my great grandson, and my granddaughter is more like a daughter to me. Who the hell am I anyway, throwing frisbee in the park with people forty years younger than me? Carrying my great grandson on my shoulders down the trail to the ocean? Telling stories back at the house over pizza that are fifty years old and making them sound like they happened yesterday?

And then it’s late and I’m on the road again, back over the mountains into the lean focus my life has become, beyond happiness and grief, a fluid stripped-down focus beyond words that I put into words anyway.

Just a half hour ago I went thru the drive-up for a mocha and there’s a guy at the window, which is a mild disappointment–I like the warm spike I get from the high-spirited young baristas. He’s got a t-shirt on with Dutch on it, “Vergeet niet om kaas te eten” it says over a goofy drawing of a round of cheese, and I say, “That’s Dutch you’ve got there on your shirt dude.”

“You’re the first one to get it right,” he says. “One guy thought it was Russian.”

Next thing I know I’m having a conversation in German with a pimply-faced kid with thick glasses while waiting on a mocha in a cow-town in central Washington. And then I’m up on this hill tearing pages out of a yellow pad.

Listen, it’s all about the children. Children purify whatever they come into contact with. They’re our only hope for salvation, which is the premise for my novel Tire Grabbers, something that’s gone largely unnoticed except by a handful of high-school dropouts, artists, and other misfits.

That’s all I’m trying to do with these yellow pads. With these novels. With these words. Strip away pretense so that the child in all of us can surface, clap its hands with delight, and laugh like crazy at the rising sun.