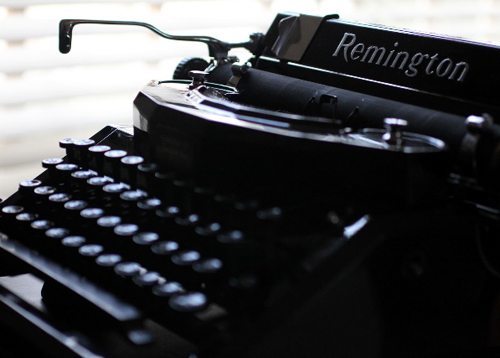 He strolled into the hock shop and wanted to do a trade. He wanted to trade an unopened box of #2 lead pencils for a guitar.

The hock-shop guy looked at him like he was a wacko. He even said it: “What are you, a wacko? We don’t do trades. And we sure as hell don’t buy pencils.”

The hock-shop guy just stared at him.

“A typewriter then? Will you trade for a typewriter?”

“Jesus,” said the hock-shop guy. “What did I just say? And what’s a typewriter?”

He went out to his van, an old VW camper, opened the sliding door, and dug the typewriter out from a pile of stuff–a 1917 mimeograph machine, a saddle-stitch stapler, a heavy-duty paper cutter and a dial telephone with wires dangling from it. He took the typewriter, a wide-carriage Remington manual, back inside and hefted it up on the counter top.

“Let me show you,” he said. He cranked a sheet of paper into the carriage and began banging on the keys. Each time he came to the end of a line a little bell went ding! and he took hold of the carriage arm and slid the carriage back to the left.

“That’s the damnedest thing I ever saw,” said the hock-shop guy. “It makes words.”

“Yes,” he said. “But I’m done making words. I want to make music. So how about I trade you this word maker for a guitar? Or a piano. A piano would work.”

“We don’t do trades!” said the hock-shop guy. “And you want to trade that thing for a piano?”

“I’ll throw in the pencils,” he said.

The hock-shop guy laughed in spite of himself. “Listen, you gotta buy a guitar,” he said.

“Well, that’s that then,” said the hock-shop guy.

“What am I going to do with a typewriter?” asked the hock-shop guy.

“It’s a Remington. It’s an antique. Someone will buy it. A collector.”

“So go find yourself a collector to sell it to.”

The hock-shop guy wanted him out of his shop. Other customers had stopped browsing and were staring at them. “Okay,” he said. “Fine.” He opened the register, took out three tens, and handed them over. Then he reached under the counter and brought out a battered guitar with a cracked neck and the D string missing. “Now you can buy this here guitar.”

“How much? Thirty dollars!”

“Then I won’t have gas money.”

“Twenty then. Give me back two tens, and then that’s it.”

The hock-shop guy stared at the Remington after the typewriter guy had left. He moved the carriage from side to side, making the bell ding. Then he lifted the typewriter off the counter and put it on a high shelf.

The typewriter guy was definitely loony tunes, maybe even crazier than the wackos who laid down cold cash for assault weapons.

He put his “back at one” sign on the door and walked down to the corner diner for lunch.