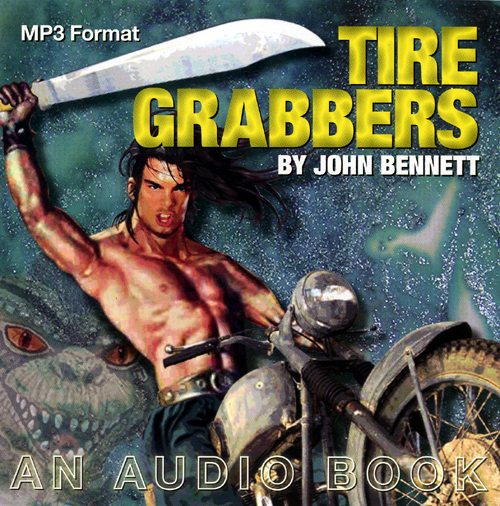 A Novel by John Bennett. Read by the Author.

Tire Grabbers is the story of the coming of Moloch, a horrific force that mutates out of the Era of the Great Schism and – feeding on spiritual marrow – threatens Mankind’s extinction. And it is the story of the children who challenge Moloch, with their innocence and with an army of mind creatures that they eject into the outer world and call…

Mastered at Shofar Sho Good Studios. peytonmusicatgmail.com | This is an MP3 formatted disc.

“People who think there is a difference between the past, the present and the future are living in an illusion.” Albert Einstein

“it breathes in and out, it is all lungs and heart and brain, story telling at its best!” –  Ann Menebroker, Sacramento, California

If you’re interested in ordering Tire Grabbers, and you live in the continental U.S., a cheaper way to do so would be to send $10 (postage included) to:

Beam Me Up Scotty

Recently I read my novel Tire Grabbers into an audio format in a sound studio. It took weeks.

“We’ll produce it as an MP3,” the Studio Director said. “Less expensive.”

“It will be one disc instead of seventeen,” he said.

He gave me an MP3 disc to take home and audio proof, and when I stuck it in my CD player, nothing happened.

“It doesn’t work,” I told him over the phone.

“Well, I put it in my CD player and nothing happened.”

“Listen,” he said. “Put it in your computer and download it into iTunes.”

I did what he told me and fifty files popped up. I had to play them one at a time, so there was no way to test for continuity. Seventeen CDs was beginning to sound like the way to go, and I called the Studio Director and told him so.

He was in the control booth when I arrived, and he signaled thru the glass that he’d be with me in a minute. He was all smiles when he came out.

“Sorry about the confusion,” he said.

“Here,” he said, and took something out of his shirt pocket the size of a candy bar. “I’ve got earphones, too,” he said.

“Is this some sort of joke?” I said

We stared at each other across a yawning chasm of technology, his face a mix of impatience and alarm.

“Trust me,” he said. “Remember how I told you to download the disc into your computer?”

“Well, now you download what’s on your computer into the MP3 player. The tracks will cue each other, it will play with continuity. That’s how it works.”

“How can someone play it in their car then?” I said. “That’s where people listen to audiobooks, in their cars. On their CD players.”

“They burn CDs from the files on their computers,” he said.

I walked around for a week with plugs in my ears and the MP3 player in my shirt pocket and listened to my fantasy novel about an inhospitable future on a device from that future, and when I was done I sat in the dark smoking and staring out the window at the moon.

“Beam me up, Scotty,” I whispered, and wondered how long it would be before that would be possible.