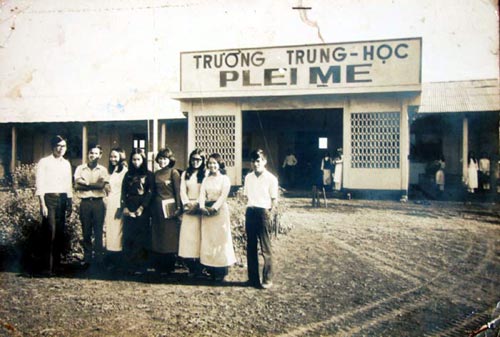 Even our school named a battle after you left at nineteen.
I was the girl who ran naked burning on the dirt road.
In America your dog ate biscuits.
I ate a quarter of a grain one of the fourth wind.
Agent Orange killed my Jackfruit tree.
Kids in black pajamas killed your buddy at the Tet offensive.
They casketed him in tin.
They shipped his name to the Vietnam Wall.
Vietnam has no wall.
Our names ripple out free in the night sky.
The day the four college students laid dead on Kent’s sidewalk,
you still a kid returned home wounded
with proud medals on your chest.
No one looked at you.

is a Vietnamese refugee. Her Parents fled from the North to the South after Geneva Conference. She was born in South Vietnam, grew up during the war. She came to the US in 1994 with her parents, seven brothers and sisters. She has been off and on in school since. She writes because she is depressed. She did not know why her school named Pleime. She did not know until her English Professors called her a poet.