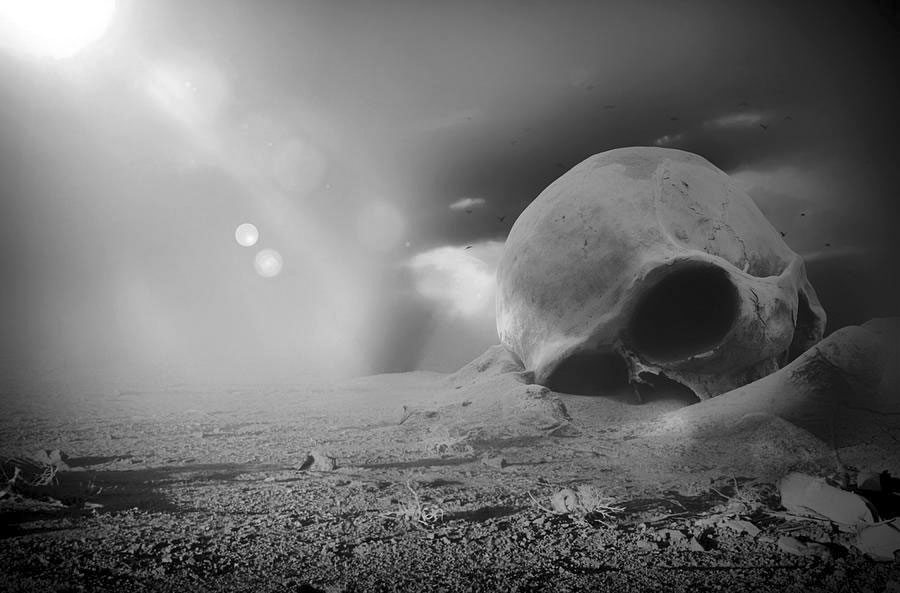 The bones are bleached in desert’s hot wind.
A large hole, centered in the back of the skull,
seems to indicate an unnatural occurrence.

Vultures still try to pick out marrow
but bone is all that’s left.

Fragments of a sock
still clings to a stick of ankle.

Mountains rise in the distance;
Perhaps that was the destination,
before the cruel blow.

Scorpions gather round the mystery,
as if a new ancient ruin has been found,
their stinging tails rise up in salute;
a photo developed in poison.

A crow glides in with
a soft landing onto the chest cavity;
the black against white bone,
a striking abstract rendering.

So what brings the being to this end?

Drugs, money, infidelity,
all could be the answer.

And maybe there is no answer,
just another soul, lost in the broadness
of life.

The sun begins to set
over those distant mountains,
where the daily routine doesn’t change
with this find.

But it seems the bones became more important
stripped of flesh, as desert creatures,
crawl in, seeking shelter from cold nights.

Worthy was this life, after death,
after all.

2 Replies to “Autopsy by Jim Senetto”