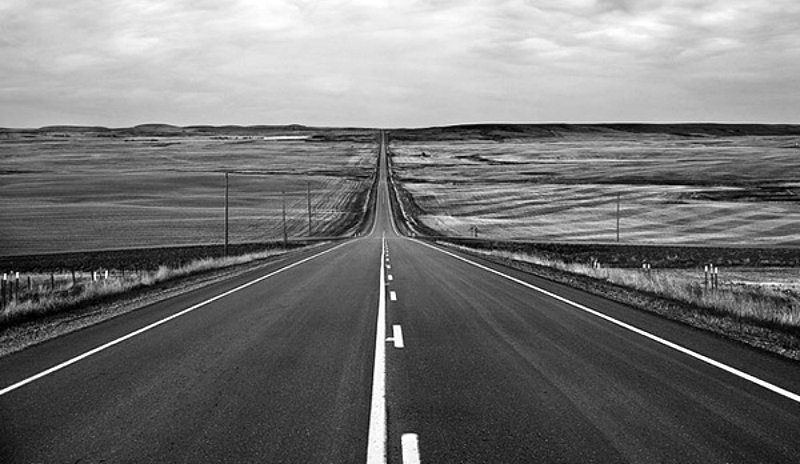 Driving across Texas you don’t want to be

your thoughts your grief your guilt your only
passengers. It’s flat so flat and free of ends of
this and that free of things to see that might
relieve give reprieve to vanishing points and
scope and this day the sky could be the land
it’s all sort of copper through these truckstop
shades and at sixty the wheel’s vibration says
don’t slow down, you’ll never get there stomp
it goose it get back up there to that eighty
sweet spot drains the tank but kills the miles
where was that trick rider from? oh right, she
lived in Dalhart, had the cutest broken nose
from a death drag, got a hoof strike but it
could have been worse, she said she loved
that horse, called it Bullseye from the circle
on its butt, I rode him once as she insisted
but found him lackadaisical no vibes you
know, but we had them, she and I, Texas is
so fucking endless, I see a truckstop pylon
miles away, I’ll stop for coffee, feel the hot
wind that I can only see in dust and crap
that blows along the copperscape of world
without end amen. I pull in, there’s been
a fuel spill, and yellow tape demarcates
something, I can smell the diesel through
my laboring AC, I pull in where cars are
parked and watch men wash the spilled-
on concrete, rainbows of oil sprout and
blossom in the spray, I am taken by the
beauty of all these color geysers in the
air. I pull my pack of cigarettes and a
voice behind me yells, “No smoking here
today!” I say, inside? Nowhere he says
and gestures hopelessly at the yellow tape
so I fill up and head back out coffee on
my mind, maybe dinner, longer I drive
closer to L.A. I’ll be, put Texas behind me
think of Port Arthur and working there
fuck it turn the scratchy radio on, get
some talk about vitamins that make you
live much longer, who’d want such a thing.
They must know our date of death, prolong
it with expensive pills, but is it weeks or is
it years I guess I’m saying prove it please

I move the dial buzz and hum get a guy who
says visualize get what you want so I envision
I’m in L.A. but all I see is dusty landscape
copper earth and matching sky flat earth is
real and I may drive off the edge of Texas

writes and welds on a farm in Resume Speed, Kansas. His short story collection (Night Train, Cold Beer) won publication by a university press and not much acclaim. Three more books since, the latest a collection of poetry titled Scattered Cranes, published by Pski’s Porch, 2017. His wife has an honest job in the city and drives 100 miles a day to keep it.