a plaidoyer to the good subject

my friend,
behold the hippodrome-city’s eerie complexion
discern the thumping of the cavalry of judicial murder
and catapult their broadcasting tools before they take your neighbour away

Refuse to treat anyone without love.

deracinate yourself from the plantations of cruelty
for you will cause harm,
your humanity will starve if you treat it as a pauper
and you may stumble into the carceral pit
if you defend the system of cages

become a tribeless and stateless wayfarer of peace

pluck the galleon’s masts from desiccated orchards
to seize all the gold!

question the notion and fabric of laws
sail in the mirror of the sky –
enter the covenant of the insurgent Sea!

The Cygnus and the Rebel

The cygnus flies over terrible seas of amber and peat, out of which giant mutineers leap, grasping the cauldrons of light.

Under, under the roots of rebellion the ossified life is stilled.

The cygnus, the outlander to the lower spheres, scorns this ambit of pain.

The rebel, who scorns it too, is rooted in it. He deepens these roots for to help the entombed to rise. 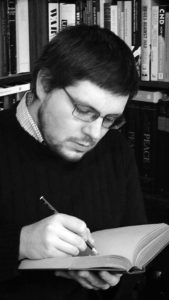 Daniel Jakopovich is a writer and a peace campaigner. He was the founder and editor of the Novi Plamen journal for politics and culture (on the territory of former Yugoslavia), and a guest lecturer in Politics, Political Economy and Sociology at the University of Cambridge and at several other universities. His poetry has been published in several literary magazines.

One Reply to “Two poems by Daniel Jakopovich”