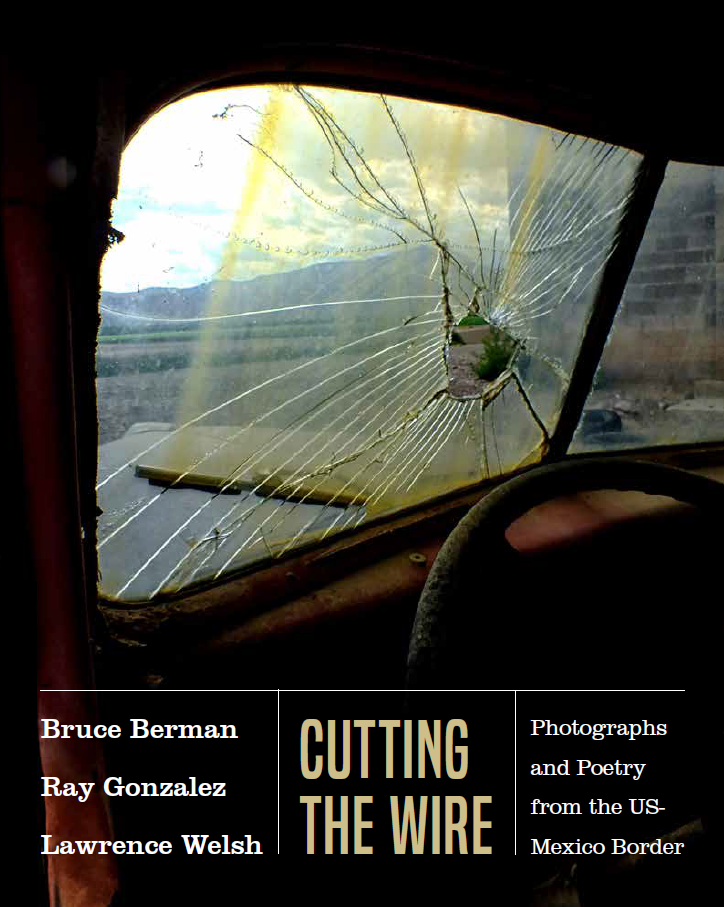 Cutting the Wire: Photographs and Poetry from the US-Mexico Border

The border has become a ubiquitous metaphor, a blurred line that means everything and nothing. Ironically, the more concrete the actual borderline between Mexico and the United States has become, the more it has been dematerialized in the literary imagination. Cutting the Wire, a masterful collaboration between photographer Bruce Berman and poets Ray Gonzalez and Lawrence Welsh, offers us a way to look again, to really look, at the world that the metaphors are based on. Berman, who has photographed and lived in El Paso for decades, is a documentarian who uses his camera to record what’s in front of him rather than for, as he puts it, “mere self-expression.” Berman’s visual investigations of the everyday realities of the border—detention centers, smeltertown cemeteries, kids playing along a river levee, descanso crosses on telephone poles for the disappeared—are exactly the stuff the poetry of Gonzalez and Welsh is made of. The multilayered histories of the border landscape provide an inexhaustible supply of rich and fertile raw material for both Gonzalez and Welsh. But their poetic visions allow them to capture elements of a personal and collective past that historians have often failed to record.

Bruce Berman is an associate professor of photojournalism at New Mexico State University and has worked as a corporate/industrial/advertising photographer throughout his career. For the past thirty years his work has concentrated on the border area that encompasses El Paso, Texas, and Juárez, Mexico.

Lawrence Welsh is a professor of English at El Paso Community College. He is the author of 10 books of poetry, including the award-winning Begging for Vultures: New and Selected Poems, 1994-2009 (UNM Press). An award-winning journalist and essayist, his work has appeared in more than 200 national and regional publications.

Lawrence Welsh has published nine books of poetry, including Begging for Vultures: New and Selected Poems, 1994-2009 (University of New Mexico Press). Now in a second printing, this collection won the New Mexico-Arizona Book Award. It was also named a Notable Book by Southwest Books of the Year and a finalist for both the PEN Southwest Book Award and the Writers’ League of Texas Book Award. A first generation Irish American and award-winning journalist, Welsh’s work has appeared in more than 200 publications. Born and raised in South Central Los Angeles, he lives in El Paso, Texas.