my town (thank you, thornton wilder)

EMILY: “Does anyone ever realize life while they live it…every, every minute?”

STAGE MANAGER: “No. Saints and poets maybe…they do some.”
― Thornton Wilder, Our Town

saints and poets?
i have been both
in fact
a trinity of sorts
saint – poet – and madman
mad for life
tearing at the sky
bleeding into the night
my pulse
a star’s twinkle
simpatico
synchronicity
two
pulsing as one
one on earth gazing into the night
one in the night
gazing back down to earth

“Do any human beings ever realize life while they live it?”

“People are meant to go through life two by two. ’Tain’t natural to be lonesome.”

“Only it seems to me that once in your life before you die you ought to see a country where they don’t talk in English and don’t even want to.”

Thornton, i hear you
i heard you

“STAGE MANAGER: Most everybody’s asleep in Grover’s Corners. There are a few lights on: Shorty Hawkins, down at the depot, has just watched the Albany train go by. And at the livery stable somebody’s setting up late and talking. Yes, it’s clearing up. There are the stars doing their old, old crisscross journeys in the sky. Scholars haven’t settled the matter yet, but they seem to think there are no living beings up there. Just chalk … or fire. Only this one is straining away, straining away all the time to make something of itself. The strain’s so bad that every sixteen hours everybody lies down and gets a rest. He winds his watch. Hm. . . . Eleven o’clock in Grover’s Corners. You get a good rest, too. Good night.”

and i hear you now
i am ready for coffee with chicory on decatur
one more day
and one more night
and then some rest
from all this walking. 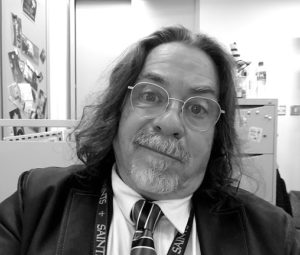 One Reply to “my town (thank you, thornton wilder) by Mike Klumpp”