Join without Form ( after fishing at Saint-Maries-de-la-Mer)

where the sky fine granular
lies low and hums
sings of shapes yet defined,
transposes not the liminal upon our love.

meet you as the pulse rages,
at the boundaries where sex almost
touches canvas,
and spinning orbs rush into cobalt blue,

into the oozing frenzy
of hues tube fingered. And at that craving edge of day
with mottled shards of silver scales
and summer clouds breaking across the slurry of Xanthopsia

I will sing the canvas.
Gut the fish. Lust.
Be blood upon the palette. Will sing
keen and lunar deep. Call you, join

without form.
in the viscosity of colours primal. will ordain the carnal
will be the rainbow uncensored; will salt the sun upon the plate;
will rend my rib-cage asunder, slap my heart upon the table and pound.

Retrocausality and the Scarab

Shall we be urbane
through a window
sophisticated and in touch
with the thigh kissing thigh
and the lip upon the pleasure
touching the hem of
once again before
first in the fallacies waiting
to taste the shadow of love passing
in the sliver of a word
and the passing of your smile
as you drift into the Canon
and the thrashing of the rushes beating
and the squawk of the swamp hen thrashing
and the tears pounding
upon the steppes upon the vein bared upon
the pavement never trod and the serpent slithering
and the shadow yet so still
and the silhouette a charcoal etching
of my heart stopped
by the shuffle of clay designer-boots and the echo of lattes and post-
modern avocados underfoot
and the synchronicity
of the holy ibis call
in my hawking breathe
words of love refusing to acknowledge the trajectory
of the song
refracted in the penumbra of the night like your nipples
refusing my kiss
when my eyes sought you heart
and the shadow sought your light
and the blind man your hand
and you loved the closeness of our sex
and saw that sacred door beyond the eye within the intimacy
of time over grassland bending
over barren plains of a heart refusing atrophy
I saw a woman
saw also the scarab dancing with entities retrocausal
vertical upon a window pane in a dream.

i spoke of roses

i spoke of roses
you scoffed
i spoke of love
you laughed
….lovingly.

i said aesthetics
you pulled the petals off.
i said darling
you said overused
….coquettishly.

i said breasts
you said tits
i said post coital repose
you said shagged
….and cried

i said ritual
you spoke of eros and chaos tongue-locked in night
i said ceremony
you said poetry is a fragile vessel
….fuck my tears

late summer day tired and worn
there is no breeze no storm dormant (adormant)
adormant we shall go
only wan panes of form
opaque. the black lace a smudge. breasts
covered in washday blue. and still
a lazy whisper half beckons half curls
around the curves and folds. and i , leopold the voyeur,
am blinded. lashed to the lens. a lazy

imprint threadbare upon the bed
above her jeans her t-shirt rising
cool flesh the touch imagined,
only a puckered
lip
away,
my breath rising under one livered rib
the blooming of the blue song lazing
curling through my loins.
( peepogold old)
whispering
misted
through the window sex

brine churning rock and
give me the slut. the maiden. the sirens
one two three. ride me. molly juice upon my cheek.
unbound me
bind me o
cut me with want ten years whetted (awhetted)
awhetted we shall be.
inside your heart i evoke your essence molly
where every dead minute pervade the censored day
and we shall go. and we shall go
far away from the bones of wasted words
far away from the song, lust and death
lust and death.

molly, upon the homeric within the inner day i err
above the chitter chatter of the cúchulainod i hear the lingual
of the unparsed voices. verbal-interruptus chopping angry sea.

and ha! bold yeats licked your foot, you say and
hermes a thumb print dimpled on your thigh
beneath the pull of your knickers climax waxed. wink o.

By Bai Mudan my Essence Sapped.

A yellow finch shivers,
in zeros and ones,
upon the line,
atop the apple tree. Ice cuts

the morning,
cuts me awake,
peels me from the White Peony,
sticky petals, feathering my groin: I sing

of Autumn severed;
of winter, wrapped in flesh with you;
in the fragile rays of a hungover sun, in the eggshell light
of the moment hung, within you moving: looking

over your shoulder,
upon a haiku high on a tree,
of breath upon my belly fold
and the many lips of Luoyang

Later on and I still see you looking for me, moving things
and foraging in the midden of my broken dreams.
Sometimes I see you before you see me seeing you,
asleep in a soft crinkle on an unconscious road
in another map, where you would have been, should have been, have I mentioned love?

I have seen you blue milked, swinging from the crescent moon,
seen you green-eyed tracing mandalas in the sky. Seen you
shining upon a buff sanded mirror on the other side of Hellespont,
your beacon deep anchored in monomyth.
In the obfuscation of the night horizon your promise, salt upon my lips.

And did I mention love, and how we struggled love upon the slipping clay,
beside the ochre dam; the distant header thumping, cumulus amassing.
And how years on, under a humid night, under the canopy of Royal Parade,
you told me that you thought there was something wrong
and between kisses within the purple of the streetlight’s dusted cone

we murdered a joint or two , spoke only in image:
in your eyes, the words from still water weeping
watched them slither, dull plodded, not quite done dead;
flayed and quartered, floundering in the mist of shadows fading
under the charmed spread of elms, car lights buzzing by.

And something happened you said
happened when you were just a girl you said
you wouldn’t say what, you said,
mentioned a labourer, who worked on the farm
said you would tell me sometime somehow, not now.

One afternoon and you laughing, singed my pubic hair with a cigarette
( Virginia Slims I recall), reading Baudelaire in French,
Henry Miller, pages down, upon my youthful chest
Earl Grey and shortbreads granular on the sheets. Just go down
there for a sec, does my vagina smell? I did, it didn’t.

Sometimes you would shimmer down from your tower
eyes two pennies lying in your shroud in the humming of the tram tracks
and when I found you, you were not there of course,
would through the shapeshifting of the unconscious in another time appear;
ranting as you dived into the headlights eyes of a hundred hissing serpents,

once at the carnival of archetype I saw you arm in arm with a clown
just a so sad clown you said, I knocked him down that Hermes. Chorus:
“Everybody wins a prize ladies and gentlemen”. And when we returned
there was a child’s doll sitting in the mirror of a mirror,
sitting on your dressing table, a string of pebbles around her neck

Then I received that final letter ( your only letter). You said
you had finally dealt with it all, in your Masters dissertation.
Spoke of Jung and Circumambulation , had drawn the unspoken
from the sacred well, mercury and process, from the three comes the four, etc.
Said it would probably be best for both of us if we parted ways (!)

Scoff. Parted? Ways? A few weeks later not wasting time
with cud of Asphodel, from pastures wan, spilling from your smile askew,
slurring ancient songs through blooded shards, through globs of puke
and empty pill bottles bumping over soggy roaches, you danced me
round and round into the shadow of the wounded lyre

singing in a now sweet breath to your chastity you avowed
( huh? we were always madly fucking; no blood stains
upon your kirtle blue or the dress I peeled off you when we first met)
you said in fact I was the first and only ,I believing,
not chancing the chagrin of a less chaste Aphrodite

And yes she was here for years
the neighbours said.
we still have her forwarding address they said,
and so I wrote it down
and I wrote it down so boldly
on paper pure and white
and come the day
beyond the shore
were wads of word and kelp anima entwined,
and I watched
as they with me
swallowed by the maelstrom of Hellespont ,as one sodden
wearied and deplete

30th of May 2006
I googled you.
You were practicing under your maiden name Ms H.
You were married to a Plastic Surgeon
and lived in a leafy suburb
backing onto the Yarra
where we once or twice, never mind.
And when I naked called
You fucking answered. You did. You did.
I said do you know who this is.

You replied
“Oh shit. Shit. Shit. Your voice hasn’t changed a bit. Shit. Are you well? Oh wow your not going to believe this. Shit listen. Last night I actually had a dream of us in the old days. Oh fuck. Why am I telling you all this? We were lying naked on some bed and in-between us was a golden book or something. I was trying to say something to you… I can’t remember what…shit… talk of synchronicity”

And we did
and we talked of the times when our paths
almost met.
and talked of friends
and the songs
on the jukebox at Norton’s hotel
And I never mentioned love, sometime perhaps, not now
instead spoke of Rorschach in the froth of lattes
in cups miles apart

Later on, that night
I remembered the first poem I wrote
for you – Silhouetted by the morning sun
with your golden satchel
I saw you coming, skipping a dream or two along the way.

And some say that from Abydos one can see the sands of ancient Sestos shore
Though I see nought but Venus’ temple, and gilded stars above a world half black
But on this other shore in you ,dancing me to dream, I live in light;
Breathe of the indissoluble airs of myth and inhale deep
of the collective unconscious timelessly seeping,
me stone-still waiting for dream to fall. 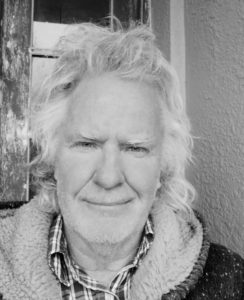 Leigh Jordan. I am a rusted on Marxist Romantic Jungist Surrealist . Have been writing poetry since early teens. Just retired so have returned to the core. With some poetry I like to unsettle. With some seduce. I live in a very small rural town in Tasmania, Aus., one pub, one shop and carrots ever on the side of the road.

One Reply to “Six poems by Leigh Jordan”