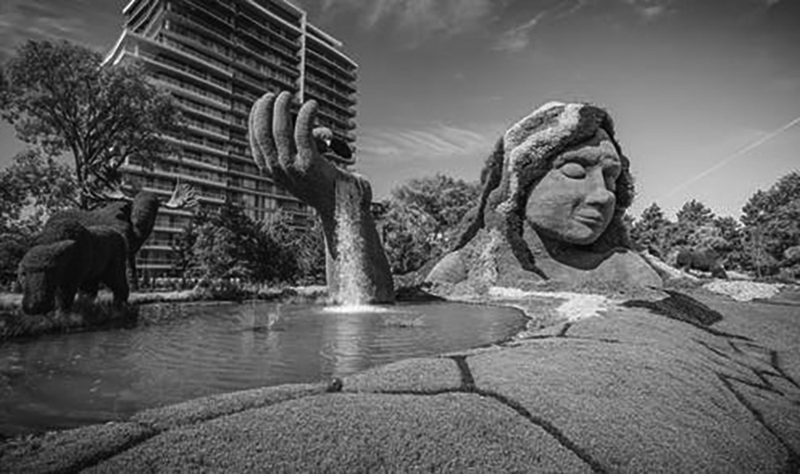 The Earth is a Woman

Clearly, as muses of the past have told the tale,
nature draws a man into her fold.
No room for doubt to cloud the mind.

Deep greens of summer leaves on the maples
fade gently to yellow and purple wisps,
float like shear silk in the breeze.

Unpredictable.
Just when understanding seems to arrive
a new face emerges from the old.

Heavy September rains begin the change,
a longing for moments passed with summer sun.
A freshening wind stirs his skin.

Waiting for the first frost to sweeten the vinifera,
he finds an abandoned bird’s nest in grape leaves.
A mother gone south never knowing if her eggs survived.

Please taste the grapes, he asks, anxious
to pick, to start the magic turning process.
Wait, she answers, for another cool night.
Wooded corners welcome him.
Crackling, twigs break beneath his feet.
Whitetail runs appear through trampled grasses.

When autumn winds blow and rain turns cold,
as cold as disappointment, he sets a fire in the heating stove,
and snuggles in flannel sheets well past the light of dawn.

Windows open in the dark, the barking begins softly,
a chorus joins in, builds to a crescendo,
the bold howling of a coyote pack echoes in the night.

He worries for mother earth, for gentle beings,
when beasts cry aloud. Exhilarated, yet he lay peaceful and listens,
hoping, nearly praying the barn cats sleep safely in the hayloft.

Gone from the farm a few poorly chosen days. On the return,
birds and coons and deer demolished half the vinifera.
The ripest, sweetest, wine grapes gone.

A buck scratches velvet antlers, tears the bark
from a fledgling apple tree only a shout from the porch.
Poorly chosen days.

But grapes the critters left on the vines
turned sweet with a cold rain. Now sit squeezed and juicy,
fermenting in a ten gallon crock.

Glimpse the more than electric light of maples.
Glorify a monumental hillside overlooking the valley.
Feel for a brief moment the freedom of the woods.

With a twenty gage over his shoulder, he walks away from the road to find solace
in the forest never really meaning to shoot a partridge for dinner, though
he suspects he might upon hearing the telltale ruffle of feathers climbing airborne.

And neither hearing nor seeing the ruffed grouse fly, but awakened
by exercised muscles in autumn air, he returns to the path,
to the glow of mother’s maple leaves dying.

Add sugar to the must. Sweeten mother’s own, as juices turn to alcohol.
Taste lingers on his tongue, portending a good batch of wine.
Dew of the earth to drink among friends and tell no lies.

Startled awake by a roaring fire, flashing light broken
by wooden slats of the Venetian blinds, he slowly becomes cognizant,
feels the frightening glare rising with an autumn sun.

Too often before the time change, he sleeps through
the momentary glory and misses the dawn shine
that precedes a covering of clouds.

Why, he cries, from atop the Marion Hills, does father sun
peek over eastern horizons, spread warming firelight over
the landscape only to be shaded by passing grey minstrels?

He never knew his mother, but she is there nonetheless,
a spirit watching over him, a loving caress he cannot feel to touch.
Yet somewhere deep in his being, he feels warm. 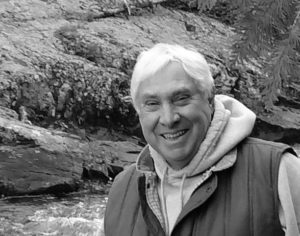 Tom Conlan lives, writes, and tends his modest grape vines in the highlands of Northern Michigan. He has captained a Coast Guard Cutter, sailed the world’s lakes and oceans, and now searches for the elusive brook trout in backwater streams. His lyrical memoir “My Journey Begins Where the Road Ends…” was released in June 2017, by Mission Point Press. Tom’s work has appeared in print in Vine Leaves Literary Journal, Issue #12, in the print Anthology, Puppy Love, in Tulip Tree Review, in the anthology, “The Water Holds No Scars,” in QU Literary Review, and in The Avocet. A new story, ‘Black Fly’ is forthcoming in the Walloon Writers Review. His work was chosen as a finalist for the Annie Dillard Prize in the Bellingham Review. Tom attended the Iowa Writer’s Workshop, holds a Master of Fine Arts in Creative Writing from Queens University of Charlotte, and a Master of Science from the US Naval Postgraduate School in Monterrey, California.