Shoulder holster slung over his chair, a
weary homicide detective sits in his office
trying to explain how he ran over a last
minute shopper with his arms full of
Christmas presents, during pursuit of a
shopping mall robbery suspect. With each
typewriter clack, the story takes shape.
A wreathed door explodes outward from a
SWAT team concussion grenade. Christmas
ornaments and wrapping paper spew into the
street. A nativity scene scatters, as ashes
float down like muffled snow from low
clouds.

Standing in front of the television,
scratching an infected vein with a steak
knife and watching Jimmy Stewart trying to
save the family bank, a local man walks
over to pull the duct tape off his wife’s
mouth and says, I almost forgot. Merry
Christmas. Knowing that the bitchy sheen
in her voice is coming back as soon as she
can call the cops, he’s ripped the phone from
the wall and stands there smiling, in charge
of this sweetly short-lived, holiday moment.

While his ex-fiance’s family is singing at
candlelight service, he’s in a ski mask
unsuccessfully searching through their gifts
for the expensive necklace he gave her.
Frustrated, he sticks the whole damn tree in
the back of his truck, lights it on fire, and
throws its tinseled ass off an old suspension
bridge. It lies burning on top of the frozen
river, as the pines along the banks move
their cold branches side to side, imitating the
wind. This is, perhaps, his best Christmas
ever. 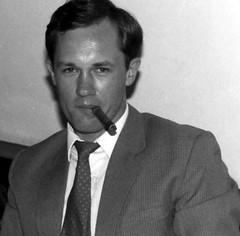 My interest in Noir/Crime film started as a child. My family lived out in farm country, picked up the TV signal from Dayton on the antenna. On Saturday nights one station would stay on all night and I’d sneak out of bed and sit with my face right next to the screen, with the volume turned down low so I wouldn’t wake my parents while I watched Peter Gunn. I was enthralled with the shadows and cigarettes and tough talk and I got a big thrill out of Mancini’s theme music.

I continue to employ the language and tone of the detective novel in my writing. However, I use a different approach than Todd Moore who is a master of dialect and lightning speed movement through a single act of violence. My writing works towards depicting and projecting a criminal consciousness onto an exterior world not limited by reason. Like Todd, I feel no need to impose moral constraint on the characters or narrative voice I employ, though I am mindful of Raymond Chandler’s sentiment that writing “must punish the criminal in one way or another, not necessarily by operation of the law.”

My writing is frequently described as “cinematic”. Pierre Reverdy said, and it seems correct to me, that the greater the difference between two juxtaposed images, the greater the effect. Here is a great example by Raymond Chandler from Farewell My Lovely, “He looked about as inconspicuous as a tarantula on a piece of angel food cake.” My poetry constantly seeks to exploit the effect of juxtaposed imagery, all the while insisting on the cinematic discipline of scene.

I don’t avoid popular culture in favor of the higher calling of literature, I incorporate and transform it. Recent transformations include a prose poem about Satan, emasculated and toothless, eating figs and plotting as he watches daytime television; a story of a doppelganger who is not actively evil, but causes trouble because he is actually a better person than his original; a tourist trapped in circular time in Budapest; an animation of Edward Hopper’s paintings with the dead-eyed menace his work deserves; an encounter with a Depression Era dust storm that renders people suddenly senile. On and on.

Around Christmas time here, the crime rate here in Albuquerque always shoots up. I am attaching a short piece I wrote, consisting of three quick vignettes, which deals with this phenomenon.

I have a few poems up on the Double Room website right now. At least one (if not all) of them—Along the Pacific Coast Highway, is directly noir-toned.