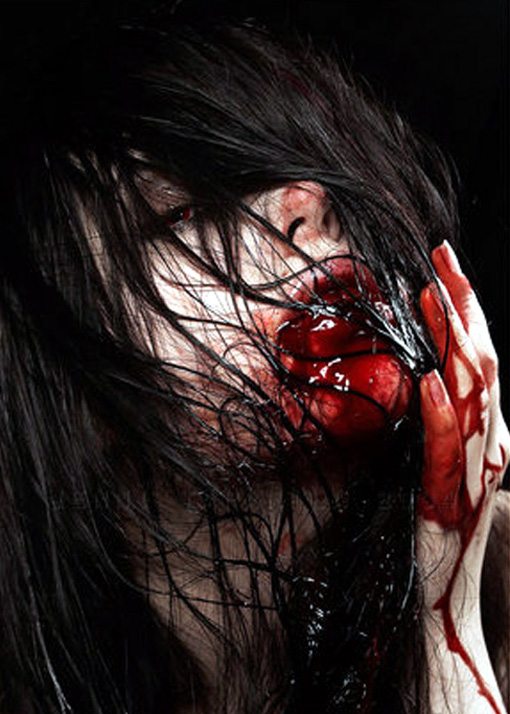 Red hands at My Lai.

I’m looking at a print by Bill Gersh where the dark woman in it has a red hand. I’m thinking of Goya working on THE DISASTERS OF WAR with red hands. I’m thinking of Peckinpah filming THE WILD BUNCH with red hands and at the end of each day it takes him at least an hour to clean all that red off. I’m thinking that just before the first performance of HAMLET Richard Burbage who portrayed him painted his hands a deep deep red and it became fashionable in Elizabethan England to paint the hands red for dinners and masques and public executions. I’m thinking that while Melville was in the midst of writing the last pages of MOBY DICK he painted his hands red in honor of both Ahab and the White Whale. I’m thinking that when Anton Chigurh walked away from that car wreck at the end of NO COUNTRY FOR OLD MEN, his broken arm was bleeding and the blood was going down and making his hand all red.

After Jerry accidentally cut himself while playing with a switchblade knife he said, fuckit, more like he was embarrassed about being so careless and vulnerable and he started doing a little dance of half pain half piss on it I don’t give a shit. Then he walked over and flicked blood all over my shirt.

Sonny said, I wouldn’t have done it if I hadn’t been drunk. He showed me his right index finger which was gone down to an inch from the knuckle. Thirty two I got off my cousin, he said smiling his stupid ass smile. It knocked me right down to my knees and i stayed there awhile. Goddam but it made my hand red. And, you know what, I could even see the bone.

One of the classic unpublished snapshots of Bukowski has him walking down the street drinking a beer only in this photo the hand he’s holding the beer bottle with is all covered with blood. One of Weegee’s best photographs is one of a guy who has just been shot in the arm. He’s leaning against a streetlight, smoking a cigaret with a bloody hand. One of my favorite photos was a windshield with the outline of a bloody handprint on it surrounded by half a dozen small bullet holes.

Hemingway’s hands go all red while he’s gutting an elk. Blood from the hatchet turns Raskolnikov’s hands red. Seconds after writing the last page of THE BEAR Faulkner discovers a drop of blood in the palm of his right hand. Dashiell Hammett cuts himself on the face with a straight razor while shaving, then tries to wipe it away with his left hand, shoves the blood all over his face and hand and gets the idea for a short novel called BLOOD MONEY.

Dillinger is playing a game of grabass with Billie. He keeps chasing her around a table and chairs and she keeps ducking away. Finally, because she is having her period, she reaches down inside her panties, comes out holding some of her blood and tries to touch him with it. She says, you’re a goddam chicken if you won’t let me smear you with this kind of shit. She puts her hand to her mouth, pretending to eat it.

Red hands on the Trail of Tears.

The whole time I was writing THE CORPSE IS DREAMING, I kept checking my hands to see if there was anything on them. The way I was writing was I was composing right at the computer, the words going down almost as fast as I got them. But the funny thing about the whole process was while I was focused on the screen and the words going there, it almost seemed as though I could also see down like the way you can see something moving out of the corner of your eye. Only this wasn’t movement. This was color, this was the dark color of blood but every time I glanced down my hands were their own natural color with no blood on them. Still, somehow I knew or was dreaming wide awake that there was blood all over my hands even while I was writing, even while Dillinger was in the middle of dying in the poem. And, the blood was almost as smelly as fresh shit and I was thinking that this is how it smells to die, this is the smell of death itself. And, sometimes I had to get up out of my chair and walk around to get the smell and the color of that death out of me and when I couldn’t hold the words back any longer I sat down and started in again and realized that there was no way to get this red off my hands and this smell of death out of my nostrils except to write it out to dream it out to dance it out to conjure it out to chant it out. And when I was finished, Dillinger walked over and put his bloody hands all over my clothes. I could feel the blood soak in, the cold bitter wetness of it but just as soon as I checked myself out in front of a mirror all the red was gone. Then I realized that it had disappeared inside me. It was a red that was part of my red and was swimming all through me, even into my dreams.