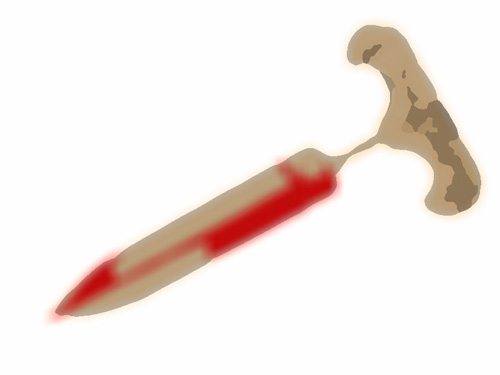 I’m holding a large push dagger made from an old file blade. The grip is wood and it is beginning to rot where it attaches to the sides of an iron knuckle bow. Jutting out of the knuckle bow is an eight inch flat dagger and the weapon is so fashioned that it could be used to punch through the softest part of the gut, the throat, the eye. or the crotch. There is no doubt that this is a murder weapon. It has the word primal written all over it, forged into the corded heart of hammered steel.

And, just what does a push dagger circa 1850 have to do with poetry? Superficially, nothing. Aesthetically, everything. When I read a poem I want it to be something that could scalp me and leave me for dead. I want it to be suffused with the beauty of language and the power of murder. I want it to own me every time I read it, I want it to be unique, unrepeatable and yet absolutely surprising every time I dive into it. I want it to have the same kind of power as a Goya or a prehistoric cave hunting scene. I want it to make my blood shake, monstrously and always.

I want to make it shake homicidally into a coded strut frenzy. I want to make it shake in the heat of the reading because the ritual of writing is symbolic of the ritual of killing. If you want to write you have to get close to the big fires, you have to give yourself up to the big fires of creation and destruction, the blood bubble caught in the dead man’s mouth.

Just the thought of death and poetry and weapons and love sloppy love starts it all going, again. The image of a machine gun gets it all cranked up and then Dillinger is talking. Maybe this is a form of conjuring, I don’t know. What it feels like is a lunatic dancing inside the blood stillness. And then I am trapped in that flogged moment and suddenly I am burning.

I can’t speak for the others here but I know that once I am inside a poem I am lost to the real world. Once I am inside Dillinger’s Thompson or Russian Roulette or The Sign of the Gun or The Riddle of the Wooden Gun I am in the outlaw. I should also add that I am writing the outlaw as well as inside him. That may be the ultimate distinction. However, I should also clarify that when I am both inside the outlaw and writing him I am also reinventing the whole idea of the outlaw. Which permits me to enjoy the violence of the outlaw during the whole process. Which is totally subversive. But, don’t kid yourself, Shakespeare loved it when Hamlet stabbed Claudius. Camus was ecstatic when Meursault blew that Arab away.

What happens is in the fury of the glory and the scream of the writing you get away with it. You actually get away with it. My guess is that Dostoevsky was standing right at the core of R while he brought that axe down on the old woman pawnbroker. Camus stood just inside the opening of Meursault’s black heart while he emptied his revolver into that Arab. And, McCarthy had crawled inside Judge Holden and was sitting all curled up in a fetal position while Holden crushed the kid in the outhouse slop.

Does that mean that as a poet you are truly an outlaw, a felon as well? No. But, you are a kind of metaphysical accomplice. You do two things at the same time. You write and you watch. And, it all gets mixed together into something like CRIME AND PUNISHMENT, THE STRANGER, THE MAN WITHOUT QUALITIES. Moosbrugger is the song of pure murder, an anthem to darkness and you write because you have to watch. You watch because you have to write. It is like a slow waltz with the angel of death. But you can’t help it. And, you wouldn’t even if you could.

In some alternative universe, Dutch Schultz is writing The Killers while Ernest Hemingway puts a point blank slug into Jack Legs Diamond. The only crime the Outlaw Poet can be held accountable for is dreaming the dream for a century of darkness. For a thousand years of nightmares packed into a bullet.

When I wrote Relentless which is the section in DILLINGER about Baby Face Nelson, it was a tight squeeze where I was standing inside him. Each time he breathed his lungs pressed against my chest. Each time his heart beat, it knocked against my rib cage. I could feel the demon flies that he kept trying to brush away. I could feel the way his skin tightened against the bones of his face because his blood swam hard against my cheekbones. I was his claustrophobic shadow, but a shadow that leaned inside him rather than toward the pavement or the floor and away from him. He may not have felt me, or maybe it was only that murderous closeness but I could feel him. I could taste his furious paranoia.

Can you be hanged for inventing a murderer? I don’t think so. But you can be pursued by the Furies. Can you be sentenced to death for creating a paradigm for a whole generation of would be Raskolnikovs or Meursaults or Dillingers? There is no law on the books that would condemn you for this. Could Robert Louis Stevenson even be tried for creating a Mr. Hyde? Not on this earth. And, yet the paradigm or maybe I might get closer by saying the archetype of the murderer still lives on in archetypes like Raskolnikov and Hyde. The archetype of the murderer, the outlaw is the source of all outlaws. There is no escaping this problem. And, if you are an Outlaw Poet then you have to submerge yourself in the outlaw if you want to know anything about the black demonic energy of murder. If you want to drink the sweet swill of violence so you can slam through the dream.

Tony Moffeit knows the taste of Billy the Kid and John Macker knows the sharp stink of scalp hair and the sound of sand in Geronimo’s shaman song and Kell Robertson knows the taste the Gunfighter gets in his mouth just seconds before he gets his gun into play.

Wyatt Earp is shooting Indian Charley Cruz in the forehead and everything goes slo mo while the Indian’s brains blow out the back of his head and in that exploded second while the dead man’s brains are painting the air, Earp knows this is better than a winning poker hand, a gold mine that pays off, or coming inside a pair of night legs. He has already written a poem that he will never write.

In THE GODFATHER when Al Pacino shoots Sterling Hayden in the throat and then the forehead, the entire theater gets very quiet, even more silent than at a communion.

Either as a bit of gossip or maybe the source was an unpublished memoir, Dora Maar is reported to have said that when Picasso was painting Guernica he could experience two things both at the same time. First, he could feel the intense burning of the bombed city and he could hear the screams of those victims who were running on fire through the streets of that furnace. Second, sometimes it felt as though he were flying. He was an enemy pilot looking down on the city and he had that exhilarating moment when the bombs were dropping beneath him and he could seem them disappear through the clouds and emerge on the earth as blown roses. And, each time a rose appeared his skin quivered and his blood shook. But, he kept that part out of the painting. He didn’t want propaganda, he didn’t want to make a political statement. He was able to erase all of those feelings and just keep it completely focused on the blown up part. He wanted to make a painting where the earth was blowing into itself.