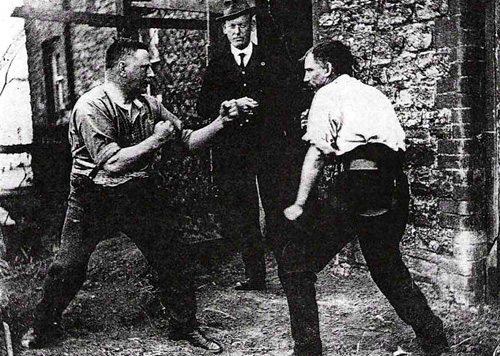 a kid I used to know a guy who was good with his fists. In fact, I never saw anyone up close as good as he was. He had the footwork, a regular Gene Kelly, he could dance just beyond anyone’s right cross, he never got caught in an upper cut trap. He could see a left coming from a block away. But the real magic was in his fists. He worked them the way Picasso worked the paint brushes, he worked them the way Houdini did padlocks, he worked them the way Hemingway worked the shotguns. And, this guy took on the neighborhood and the best part of it was there was no one who could take him. The only problem was he was a sucker for the easy score. He got caught up in some kind of stick up and got sent to the pen. After that I lost track of him. But while he lasted he was good, he was the best I’d ever seen.

And, how do you take on someone like Bukowski? I have no doubt that every poet in the small press who has had fantasies of becoming a famous poet has asked himself this question. Because, if you are going to take on Bukowski you have to do it on at least two levels. First, you have to literally take over his style and write better than he does in the way that he does. Second, you have to become even more famous than he is. And, by taking on Bukowski, you also have to dig far back into your own nightmare blood to do it, because taking on Bukowski means this will be the battle of your life.

as though you really have a choice in the matter and you don’t. Any old wannabe, even the second raters, can tell you that. Bukowski’s is the kind of influence that is absolutely toxic, once it hits you, you are done for, you are cooked all the way through to the marrow and the neurons. You are his, lock stock and twitch and unless you are strong enough to realize this, you will never have a voice of your own no matter how minor you may become. Getting a taste of what Charles Bukowski could do at his killer best is also like getting a little taste of what you can’t do. It’s a double whammy, like getting bitch slapped with a ten ton truck.

is that alive Bukowski was really too good to beat, but dead he is impossible. And, the reason he is impossible is that during the last fifteen years since he died, he has become immortal, one of the poetry gods. Which literally means you can’t beat a dead man, because a dead man can become your very worst demon.

can hear the wannabes asking, but how good was he? The first thing to keep in mind is, if you have to ask, you haven’t got a prayer. How good was he? When he was alive had had a lock on the small press. If you weren’t a Buk disciple, and there were more than I could count, the best thing you could do was work on what you were good at and stay focused on your little square of the dirt. Now, that he is dead I’ve noticed that even the establishment has tacitly accepted him as important. And, if you don’t believe me check out some of the more recent poetry anthologies and literary encylopedias. Chances are you’ll find his work and bios more often than not. Which means he has become canonical.

is how good are you. So far, what have you written that will even get you in the door of small press poetry. Have you written enough important poems that will get you compared to people like John Yamrus, Lyn Lifshin, Mark Weber, Tony Moffeit, John Macker, Raindog Armstrong, S. A. Griffin, Kell Robertson, Gerald Locklin. Have you done anything as supremely outstanding David Lerner’s THE LAST FIVE MILES TO GRACE, Kell Robertson’s A HORSE CALLED DESPERATION, Tony Moffeit’s BLUES FOR BILLY THE KID, Mark Weber’s PLAIN OLD BOOGIE LONG DIVISION, or John Macker’s ADVENTURES IN THE GUNTRADE? If you haven’t hit that level and that level is where the best of it all is, how can you expect to take Bukowski out?

can pick up almost any small press magazine and immediately find those poets who write like Bukowski. The strangest thing of all is not long ago a young poet sent me a poem about Charles Bukowski. But here is the kicker. He wrote the poem in my style, all short lines, words abbreviated or all broken up. And, I don’t think he even realized it. But, the thing that he indicated is that there are really only two choices with some variations available to most young poets in the small press these days. There is Bukowski who mostly wrote long lined poems with some short line variations or there is me and I write in extreme short lines with a few slightly longer line variations.

I’ve never tried to take Bukowski out. Because I know it can’t be done. Just as you can’t take Hemingway out. Just as you can’t take Cormac McCarthy out. What it all comes down to is this. You have to create and then concentrate on your own story and you have to gamble with that story against the void. And, you have to go into this knowing full well that you are fated to lose that fight but in that gamble in that struggle in that dice throw against the bones of the universe, you win because you lose. You win because you made it all a good fight, a brave fight in spite of the zeroes showing against your name.

is asking, what about fame. Yeah, well what about it? Fame or the longing for fame will fuck you worse than anything that I know. Some people get famous and some people don’t. Some poets sweat out their worst fame nightmares at three o’clock in the morning fantasizing about the kind of fame that will never appear, that will never belong to them. If you are human and you write poetry, you also think sometimes about fame. You can’t help it. And you think about Bukowski and his money and his racetrack escapades and his parties and the fact that everyone knew him and he was a celebrity and you think that maybe even if you can’t have fame you can imagine tasting the swill of Bukowski’s fame but in the end if you are the least bit honest you know that doing something like that is nearly as impossible as becoming famous and you resign yourself to dying like Dave Church behind the wheel of a beatup Checker or like Jack Micheline alone on a Bart train or maybe walking out of a bar at one a.m. with that last poem you wrote while the bartender was closing up. Because if you can’t be Bukowski, then maybe you can die the way you have lived, always a little fucked up and against all odds.