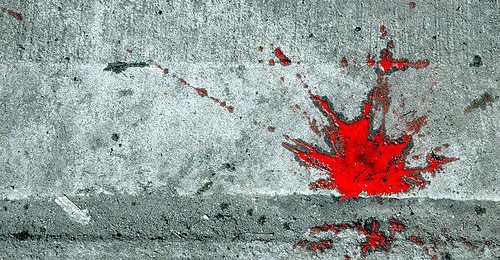 Rumor, anecdote, or outright exaggeration, this story persists about Lorca’s execution. Just before he was forced to kneel in front of the killing wall in Granada, Lorca passed a poem he had just written to one of the soldiers on the firing squad and the man read it and discovered he could not participate in Lorca’s murder. And, right after Lorca was shot, the soldier was also shot for insubordination and later thrown into a ditch with the paper containing Lorca’s poem shoved into his mouth. And, the blood was all over everything.

I’m working on The Name Is Dillinger. I’m sitting at the dining room table in the old house in Belvidere. For some reason, I’m home alone. The old Royal typewriter is sitting in front of me. It’s black all over except for the name plate where some of the black has been rubbed off showing the brass. And, the poem is really beginning to jump at me. I’ve already written some pages in longhand and now I am typing and Dillinger is talking. And, he’s talking to me at the top of his lungs and it’s hard for me to keep up because it feels like I’m taking dictation. I’m typing on the old Royal as fast as I can and I know I am misspelling words but that doesn’t matter I’ll correct them later because I don’t dare stop and Death is sitting across from me. If I look directly at him I won’t be able to see him. I can only catch quick glimpses of him if I look out of the corner of my eye.

What is so ironic is that Death thinks that by distracting me he’ll mess up all my rhythm and that I’ll fuck the poem up for sure. What he doesn’t realize is that he’s one of the major inspirations for the poem in the first place. I need him there. I need him to be sitting at that dining room table because when I write a poem like The Name Is Dillinger I am actually eating language in great big bites and when I eat language I also need to eat pieces of Death as well. I need to keep tasting the words and tasting Death’s quick stink and rot. I need to devour a whole universe of Death along with the skin and the blood of the poem.

Whenever I get interviewed nobody asks me how I can manage to keep my day life separate from the night of the poem. Or, maybe that kind of question just doesn’t occur to anyone who doesn’t write the long poem, the epic, the saga, the novel dreaming itself into the frenzy of the poem. What happens, at least to me, is that I am somehow able to speak both languages at the same time. Just as I am sure Whitman did. Just as I am sure Neruda did. Just as I am sure Homer did. But, the strange thing about living this way is that every once in awhile I find the daylight language getting all mixed up with the night alphabet of the poem. The way the poem bleeds itself into me and me back into it.

I’m standing on a street corner and I overhear someone say, a man was shot right there on that spot two days ago and I look for blood signs on the pavement and while I am searching the cement for night colored stains Death is loitering in front of a liquor store window. He knows that I have already seen him and he thinks that just the sight of his rag and bone frame will short circuit my imagination but what really happens is that when I think of him the sight triggers a line I’d been wanting to use in DILLINGER and pretty soon I am getting the first twenty lines to Dillinger’s Thompson. I get a licorice taste in my mouth that goes all through me and makes me think of the way blood comes out of a wound and Dillinger is trying to tell me something he is both a photograph and not a photograph and the man talking about the victim who got gunned down on the corner is also talking this is the real nighttalk of dying, the chatter and the buzz and the static of the world becoming part of the poem.

I’m reading The Riddle of the Wooden Gun to a dark living room. Shadows have been thrown up on the wall from somewhere beneath me and I am reading to them as though they are the audience. I start out slow and pretty soon I can feel the poem begin to gather momentum. Then I am at the part where the rebel guerilla fighter has killed the kid and when he goes over to the body he discovers that the kid is armed with a wooden gun. And, when I glance up the shadows on the wall have moved slightly and a sigh comes from somewhere and Dillinger’s face has begun to levitate above the easy chair and little planets of blood are circling it and the poem has suddenly become a movie playing itself out in the air and Death has come close and is asking if I will give him just one image, maybe the one where Dillinger is able to rub the wooden gun three times and turn it into a real one and I tell Death to go fuck himself and Death only knows the meaning of the words but doesn’t know how to actually do it and I want to find a way to have Dillinger say that to Death in the poem but I don’t want to force it in and then I realize that Dilllinger’s escape from Crown Point Jail was the ultimate fuck you and the wooden gun was Dillinger’s best finger to Death ever.

I’m reading The Corpse Is Dreaming. It’s a rehearsal for the one I am scheduled to give live on KUNM from The Outpost. I have all the radios and tv sets turned on in the house because I want all of Death’s static in my ears. I need to taste and I want to hear all of Death’s static and the air is turning black with the noise but that’s okay, that’s just the way that I dreamt it. The air is supposed to turn black. And, then little by little, Dillinger’s feet appear on the floor. Then his fully trousered legs take shape. Then his torso all covered with blood, then his arms, one is underneath him, one out to the side. Then his head which is a bloody stew of wounds.

And, I am really into the poem now, I can never read Corpse without giving in to the rush and groan and whisper and scream of the poem. Because of all the poems in DILLINGER this is the one that refuses to just be read. It must be danced so that it can be undanced. It must be acted so that it can be unacted. It must be shouted so that it can be unshouted. Of all the poems I’ve written The Corpse Is Dreaming relies on static, stutter, slaughter, and silence and every time I do Corpse I have to reinvent all of it. I have to place myself squarely in Death’s zone. This is the only way I can reach into the heart and core of the man. Because Dillinger has become a complex metaphor for american darkness and oblivion. More than that. Dillinger has somehow become a national archetype which permits us all to fall in love with a uniquely american version of murder and mayhem.

All that he asks is that we leave a little blood on the floor. He never expected me to dance in it.