For a long time

I’ve wanted to write the equivalent of George Gershwin’s Rhapsody In Blue in poetry. For a long time now I’ve wanted to write something in poetry that was just as good as Aaron Copland’s Billy The Kid or Fanfare For The Common Man or Appalachian Spring or Rodeo. For a long time I’ve been writing toward something that isn’t just good but is somehow both self and generation defining. Something in poetry that comes close to Beethoven’s Ninth Symphony or Mozart’s Linz Symphony or the very best of Miles Davis. Yeah, I know, arrogant as hell, but I’m tired of fake humility, I’m just simply ready to take it all on. I look around and see so many people working the fame circuit. Fame without substance is poetry without soul. What I really want to do is write something that walks the breath right out of your mouth, then dances it back in ways that your breath has never been danced with before.

Beethoven, Larry said. You must be fucken crazy. Nobody can write as good as Beethoven. He had just finished reading The Corpse Is Dreaming. He threw it across the table at me, it knocked over the ketchup, and said, I get you when you write a poem about Linda who shoots Manny in the balls but when you do something like this, I’m lost.

Vinny laid the manuscript of The Riddle Of The Wooden Gun down on the foot stool and said, Jesus why weren’t you doing something like this twenty years ago instead of pissing your time away on those miniature thrillers where Fatso gets his head blown off in the crapper while he’s taking the best shit of his life. Don’t get me wrong, okay, I like the short stuff, it’s punchy and at least three drinks ahead of the world, you know what I’m talking about, the twenty liners filled with sex, vomit, and mayhem but fuckit Riddle is the mother lode.

Keeler hefted DREAMING OF BILLY THE KID then slid it across the table and said, Sorry, kid, I’d love to publish it, it’s the western to end all westerns but it’s…. He paused, fished a cigaret out of his pocket, got it going, and said, problematic. Come on, don’t gimme that face. I got a reputation to maintain, these are hard times. My distribution is all tied up with the university circuit. If I do your Kid novel I land in a jackpot loaded with shit. First, it’s experimental. You know who reads experimental. Nada. Second, it’s got words in it I wouldn’t want to think of let along put on a printed page that my publishing trade would be aware of. Know what I mean? Last of all, you are not exactly in solid with academia. Look, how can I publish Arthur Sze right along side DILLINGER. You wanna tell me that? And, I know this sounds fucked but if you can just wait until you are dead and even more famous than you are now, publishers will eat your stuff up with a soup spoon. 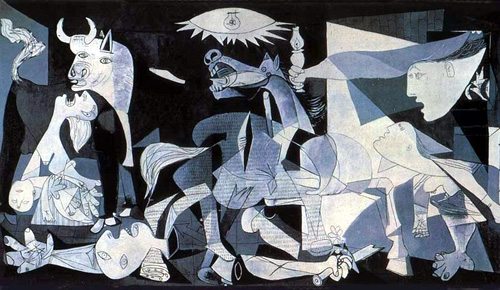 For a long time I’ve wanted to write the equivalent of Picasso’s GUERNICA. I wanted to blow the american sentence into so many pieces it would take a whole staff of CSI’s to put it back together. I wanted to demolish the polite shit that passes for poetry in all the slick academic quarterlies and then kick the cellar doors to america open, kick, axe, bludgeon, blow those motherfuckers right off their hinges and let all the repressed language of america out in one horrific black wind because for too long the dark talk of america has been hog tied, repressed, locked away in a coffin like some outlaw vampire. I want that version of the american vampire set free and I want all its words thrown into one hurricane of a wind. And, when I say vampire here what I am talking about is not someone who will suck your blood but a poet who will give your blood back to you in the form of the original american tongue.

I’m staring at an advance movie poster of PUBLIC ENEMIES. Johnny Depp is standing near the movie title. He’s wearing the kind of hat my old man wore in that classic photo my mother took of him in the early forties. Depp is also wearing a suit and tie and is holding a Thompson sub machine gun. The idea you have to keep in mind is that even though we are living in the first decade of the twenty first century, there is something about Depp as Dillinger that strikes a nerve. And, while Depp really doesn’t look at all like Dillinger there is something about his face that has a kind of lean, rugged look to it, the quintessential bank robber outlaw look. Enough of a look that will probably give him a pass and allow him to become Dillinger to everyone who sees the movie. Bogart would have been perfect but in the late thirties and well into the forties Hoover had warned the Hollywood studios off any such project. Warren Oates played Dillinger in the seventies and he really looked the part though the movie wasn’t very accurate and could have been much better written.

In the end, it really doesn’t matter who plays Dillinger because the faces of everyone who played him in the past just seem to merge into a kind of dream Dillinger, a Dillinger that Dillinger would have fallen in love with. And, that dream Dillinger then shape shifts into the Dillinger that I know. Into the Dillinger that I have known since the early seventies when I started writing the poem. And, I suppose that I need to confess at this point that I have never really been writing a poem about Dillinger’s history or even american history based on the events of the thirties. Instead, I have been relying on history only when I needed to, only when it was convenient. Also, the movies, because the movies have become our well of secret national archetypes, our library of nightmare mythologies.

When I saw that poster of Depp as Dillinger holding that machine gun, all of those old previous longings, memories, and dreams of Dillinger rushed back and it was then that I realized there was no need for me to create as well as Beethoven or Gershwin or Copland or Picasso or Davis. To say that I already have would definitely be arrogant and probably stupidly arrogant at that. But, to say that I already have created as ambitiously as they had would be much more accurate.

Ultimately, and usually around midnight, I find myself asking the question, just who the hell was Dillinger. I’m sure Melville asked the same question about Ahab and Cormac McCarthy may have found himself wondering just who Judge Holden was. You have to ask those kinds of questions about the major and ongoing mystery of your life, especially when you are writing that big book. Because, that’s the only way that an Ahab, a Holden, or a Dillinger remains a mystery. 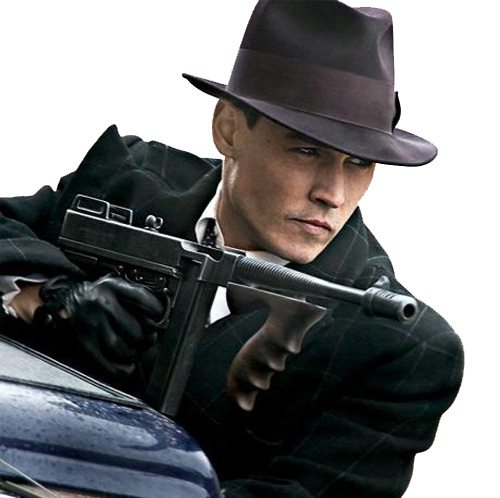 0 Replies to “todd moore | the blood of america”