when simple human emotions well up so powerfully and darkly inside the blood, you are left with just two choices. Write HOWL or ARIEL or CROW or DILLINGER or load a machine gun. Because nothing else will do. Nothing else will satisfy. Nothing else will oppose the violence in a violent world like a poem as dangerous as a Molotov cocktail with a short rag fuse that is lit and burning. Ultimately, writing poetry is nothing less than an act of total war. Only this is a war waged in and through the human psyche. This is a war fought in the ditches and the trenches of your worst nightmares. This is really what writing poetry is all about. This is what really defines Outlaw Poetry.

Kell Robertson is standing out behind some scorpion infested New Mexico bar. Maybe it’s called Miguel’s or Angel’s or The Black Sombrero and he has a 22 caliber pistol he is using to practice the fast draw and the more he pulls that pistol the more he claims he can feel some kind of gunfighter energy inside it and he turns to the wind which is also the angel of death and says, Do you think it’s possible for the dark stuff of poetry to pour out of the ground and before that death angel can answer he waves the phantom off and starts doing the fast draw again only now he is talking to himself, he is saying the lines to a poem that won’t stop coming and suddenly he runs inside, asks the bartender for something to write with and a shot of tequila and he sits at an old wooden table that has been notched and carved with hundreds of names and initials and writes a poem called The Gunfighter and doesn’t touch the tequila again until he is finished and then he sits there touching the six shooter’s wooden grip and then the poem. And, the tequila scorches him all the way down.

I never wrote anything at the Clifton Hotel that was worth a shit. I think I might have been able to. Maybe. I had all of that darkness packed inside me. But it was mostly the smell. The rotting carpet, the shitted furniture, the gone wood, the whiskey and body odor stench, the whole visceral gut wrenching vomit reek of the place. It was as real, as palpable as the people who lived there. Now, when I write about that place I practically have to reinvent it brick by brick. 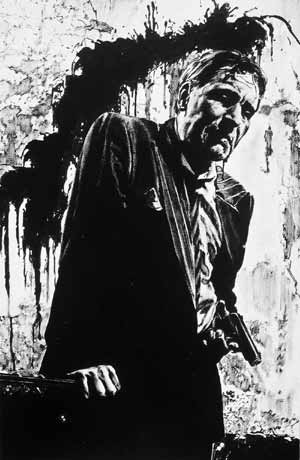 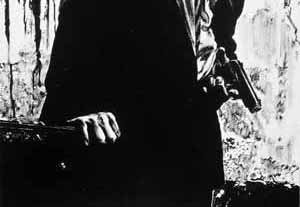 Some poems are like house fires, it is dangerous to go into them, it is risky to even consider entering them because they’re so outlaw lethal they can mark you by just thinking about them. Still, Lorca couldn’t resist thinking about POET IN NEW YORK, Ted Hughes found dark places on his arms and legs where CROW had touched him, Tony Moffeit’s dreams are all splashed with the shadows of the Kid, and Dillinger has shot my aura full of holes with his spirit machine gun. Walking into the big fire of an Outlaw poem will change you forever. From that time on you will always be walking through the smoke.

And, you can always tell an Outlaw poem from all the rest because it bleeds. Not on your lapel but in your nightmares. It bleeds all over your dreams because it haunts you. It haunts you until you want to cry mama, it haunts you until you want to run to see if your daddy will still save you, it haunts you because it doesn’t scrape all the skin off your knees. It scrapes all that gauzy feel good stuff off your soul. Because what an Outlaw poem really does and what most mainstream mfa poets know beyond all other knowing is an Outlaw poem will fuck you up. And, there is no coy faux scholarly Dana Gioia inquiry of Can Poetry Matter here. Because the question is irrelevant in the first place. You write the poem regardless. Even if it means a lifetime of total neglect or a bullet in the head. Or both. The muse of poetry is a mean motherfucker and won’t let you alone. Won’t let you take a day off and nights the muse rides your silly ass all over the ceiling. Lorca had no choice he wrote in his blood. Hart Crane had no choice he gave himself up to the sharks of the word. Sylvia Plath had no choice she cooked her brains before she ever stuck her head in that oven. d. a. levy had no choice he tried to eat the sun and settled for the rifle. Mayakovsky had no choice his heart couldn’t digest the bullet. They all got caught in this psychic war. Because the nightmare of poetry is war.

With DILLINGER most of all.

0 Replies to “todd moore | the nightmare of poetry is war”