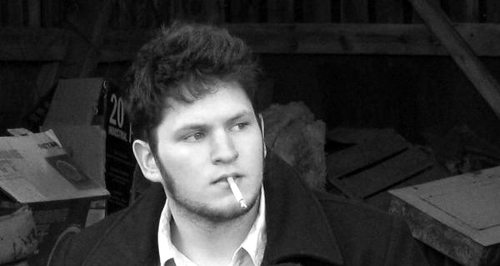 was born & bred in a small New England town, where the winters are cold & the air is not quite so clean. Early childhood was good but not great. Invalid father dying before eyes of not even five years old. Mother was a nurse, worked twelve hour days came home took care of us then a bottle of wine to the room. I was a “momma’s boy”, no doubt about or shame in my heart of it. Aged ten, my father died – more relief for him anyhow. Aged twelve, Mommy died. Orphaned with a brother and a sister. Doctors call it Post Traumatic Stress. Anxiety & depression marked with obsessive behavior. Cared more about music than anything else for years. Melodies never end for good. Read Ginsberg poem, fell in love with the visions of the back of the mind reel. Then Kerouac. Then Burroughs & Micheline & Kaufman & Carver & Bukowski. Their words were more real than anything else. I wrote for three years straight, quite terrible poetry. Conversation with a close friend turned the poetry around in July of 2008.

A tibetan
monk doused
himself in
petrol oil
& then took
a match to his
body & up in flames
he went burning to
the nothing sky.

The man was
devoted to
the void &
if he hadn’t
found buddha
he’d be the
greatest poet
out of them all
sending smoke
signals out
of flesh to
the sky.