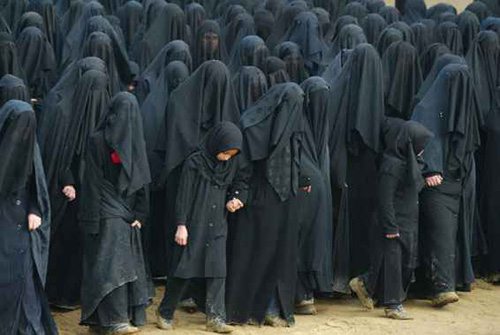 My eyes follow them,
Women in Burqas of gold, cream, blue.
Burgundy, women unseen, traveling
To a wedding party to somewhere
In Kandahar.
How do I know that they are women
Except that only women wear Burqas,
Covered from head to foot with squares
Of opening, netted or crocheted,
Framing their eyes.
And even in their embroidered beauty
The intricate stitching of the covers
Over their heads do not distract.

A woman hands a lipstick to her sister
Who runs a slash of berry red across
Her unseen lips because in their Burqas,
To these watching eyes
Beauty blossoms, beauty blossoms
In secret salons, in homes, where women
Carry out rituals, who teach
Girl children to read Arabic
Who resist the law handed down
By men demanding invisibility
As their right.

My eyes follow them, the men hobbling
On one leg, their crutches become wings
As they rush in unison toward
A helicopter dropping prosthetics,
Prosthetics in pairs floating
From parachutes, dropping
Onto the land, dry, barren,
When one thump or hop
Could explode a landmine.

My eyes follow the woman, a journalist
Named Nafas, in her Burqa,
Disguised as the fourth wife
Of a man who rides with his family
Ostensibly to Kandahar
Nafas searches for her sister
Whose legs have been blown off,
Left years ago in Kandahar
Who has threatened
To kill herself rather than live
Under control
Of the Taliban.

My eyes follow them, the woman
Surrounded by her children
Whose hunger gnaws
At a sandwich made of grass/
The father knows it’s only
A matter of time as winter descends
Over the land, as tons of wheat
Are hoarded by warlords
That death may be a gift,
That death may be better
Than starving.

These eyes absorb, penetrate
These eyes remember
The bound feet of my aunt
In Oakland’s Chinatown, this woman
Whose movement was restricted
From her girlhood in China
All the way to the United States.
These eyes ferret the unknown,
The hidden, the unseen faces,
Shapes of their jaws
Mouths, arms, bodies, legs,
Of the women in Burqas
Whose passion for movement
Remains unknowable,
Whose spirit thrive
At the thought of wheat
They could pound into flour
Who long for the sun,
To find them unafraid
And daring, daring
To read the newspapers,
Listen to the radio, watch television,
Walk the streets, run the land
Dancing as women, as sisters
Beckoning in the heart of darkness
As the eyes split open,
Their ankles glistening with truth.