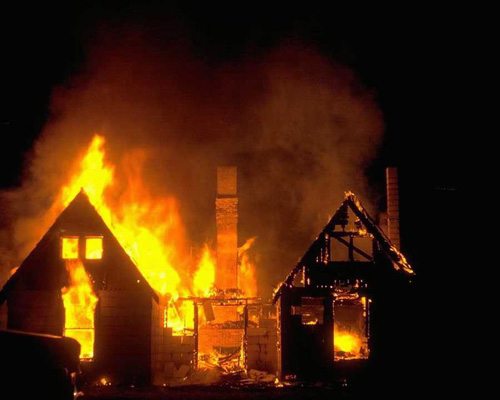 can plan to burn a house down. You can even do it on the spur of the moment and then step back and enjoy the heat of the fire and the way it blows the windows out and breaks the doors in half. Burning a house down is a little like committing murder. Sometimes you do that in the heat of the blood and the velocity of the moment. It just happens the way that you pull out a gun and shoot a man in the head just to see which way the blood flies. Burning a house down is a little like blowing up somebody’s car. Maybe with the driver is inside, maybe not, but you do it because you have the dynamite or you have the Molotov cocktail or you have some kind of explosive and the fuse is lit and you are dancing up and down with the fire and the fury of that dynamite that gasoline that plastique and you have to do something or you are going to explode.

Writing a poem is a definitely like burning a house down or shooting a man in the head or blowing up a car. Writing a poem begins with a headlong rush into the white fury of the words crowding into your brain. You don’t know where they are coming from but they are coming. And, when I say you I mean me because all you’s in my essays are really me, the shadow me, the outlaw me, the gangster me. I don’t expect the you out there to feel anything like this. Even if you write poetry. Even if you are an outlaw, too.

And, when the house is really going, when the flames are shooting out through the roof and holes in the walls where pieces of the house have fallen out into the undefined darkness, I am way inside the poem. I am so far inside the poem that I can feel the fire’s black heat and I can swallow long pieces of its crackling fury.

Poetry is so gorgeously flammable. And, poetry knows this. Poetry has a mind of its own and loves to instigate house burnings and homicides. Poetry is a cock tease and an open wound. Poetry is the fire that comes out of a bullet hole in a woman’s hair. Poetry is a psychic manifesto against the ordinary, the safe, the mundane. Poetry wants to rob banks, poetry wants to blow up trains. Poetry wants to take hostages. Poetry scares the shit out of death because poetry doesn’t give a fuck about anything except poetry. The thing is, poetry doesn’t die. Sometimes it is neglected, even forgotten, but poetry has a half life of a hundred million years at warp speed. Death has always counted on fear. Poetry has no fear. Poetry runs hundred yard dashes with bullets and wins. When poetry howls, death listens. When poetry fucks with you, you have two choices. You can either put on a bullet proof vest or you can run. But you can’t run far. Poetry is better than death at finding you in the dark. That’s the magic of poetry, that’s its mojo, its duende. It can spookdance you right into the center of its hurricane voodoo and once you get inside of that you are done for. Lorca knew that. Bukowski even in his wildest drunkenness knew that. Tony Moffeit knows that.

From DANCING WITH THE GHOSTS OF THE DEAD, Tony Moffeit, Suburban Wilderness Press, n.d.

When I’m writing I would get the burnt smell of cooked electricity all over the house. What I used to do whenever I noticed that odor is I’d get up and walk all through the house to see if I could find the source of that burning. But, after awhile I’d get tired of looking and go back to the poem. Then, one day it occurred to me that I was the one who was burning.

From DAYS I FELL DOWN, Dennis Gulling, Crawlspace Press, 2004

Some days I go out, get in the car, and drive. I never know where I’m going. That kind of driving is like writing a poem. One day while I was out in the mountains I saw a car burning. I drove past a man holding a gas can. He was smiling. I didn’t stop but I recognized that smile. It was kind of like a poet smiling after just writing a poem. Somehow he understood the fire and the fact that after awhile the car will blow. That kind of explosion is so close to the way a poem explodes in me once I am done. And, I have to keep reading it over and over just to get the effect. Just to feel my blood shake.

yesterday
when i
was on
the highway
a hearse
passed me
then a pick-up
w/two upright
porta-potty’s
in the back
then a large
flatbed truck
hauling 6 cesspools
strapped
to its back
all these
receptacles
of waste & death
flying by me
under the cloudless
blue summer sky
then i saw my face
in the rear view
unshaven, pale
a skull wrapped
in pasty, stubbly skin
& i accelerated
like a motherfucker

From A BELLYFUL OF ANARCHY, Rob Plath, Epic Rites Press, 2009.

Speed, fire, murder, futility, the excitement of writing the poem, the ecstatic velocity and that shaking engagement with fear. Writing a poem is like having rough sex with death. You know damn well who is going to win but you have to fight it out. Poetry expects you to. And, that’s what death fears most of all.

Todd Moore books and cds are available by clicking here…