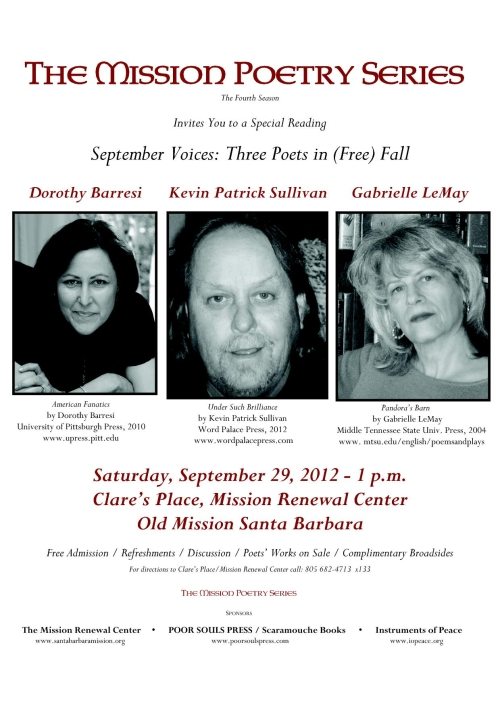 SANTA BARBARA, Calif. September 4, 2012 – The fourth season of the Mission Poetry Series kicks off on Saturday, September 29, at 1 p.m. at Mission Santa Barbara, with “September Voices: Three Poets in (Free) Fall,” featuring Dorothy Barresi, Kevin Patrick Sullivan and Gabrielle (Gaby) LeMay. The reading will be held in Clare’s Place, a library and conference room at the Mission Renewal Center on the grounds of the Old Mission. The event is free and open to the public.

is the author of four books of poetry: American Fanatics (University of Pittsburgh Press, 2010); Rouge Pulp; The Post-Rapture Diner, winner of an American Book Award; and All of the Above. She is the recipient of two Pushcart Prizes, the Emily Clark Balch Prize from Virginia Quarterly Review, and a Fellowship from the National Endowment for the Arts. She is currently serving as a judge for the Los Angeles Times Book Award in Poetry. She is Professor of English and Creative Writing at CSU at Northridge, and lives in Los Angeles with her husband and two sons.

has published several chapbooks, including his new release, Under Such Brilliance (Word Palace Press, 2012), and two full length collections, First Sight (Mille Grazie Press 1994), and The Space Between Things (DeerTree Press, 2008). He’s the co-founder of the annual San Luis Obispo Poetry Festival and the monthly reading series Corners of the Mouth at Linnaea’s Café, in San Luis Obispo. Kevin served as poet laureate of San Luis Obispo in 2003. He lives in San Luis Obispo with his wife, the artist and poet, Patti Sullivan.

earned her MFA in poetry at Hunter College in New York City in 2001. She has published more than seventy of her poems in literary journals and anthologies, and has won awards from The Academy of American Poets, Hunter College, Writer’s Voice and Big City Lit’s “Lyric Recovery”. She was a semifinalist for the 1999 Discovery/Nation Award, and has twice been nominated for a Pushcart Prize. Her chapbook, Pandora’s Barn, won the 2004 Tennessee Chapbook Prize from Middle Tennessee State University. Gaby lives in Oxnard.