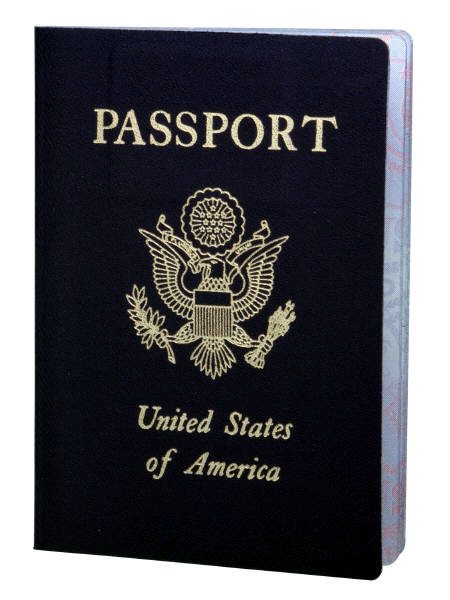 May We See Your Passport Please?

He needed to renew his passport. They sat him down in a wicker chair at the far end of the waiting room with a form to fill out. They gave him a stub of pencil even tho it said at the top of the form in bold print “use only black ink.”

They watched him from down the room just outside the office door, two men and an overweight woman in a green jumpsuit. All three wore glasses with a violet tinge to them.

He was the only applicant in the waiting room, which was rectangular and, with the exception of the wicker chair they’d directed him to, filled with sofas and easy chairs.

At the opposite end of the waiting room were two unisex restrooms. He started to get up to go down there, but the woman turned and walked briskly down the room, yanked a hammer and a fistful of nails from a deep pocket on her jumpsuit, and whacked cardboard out-of-order signs to the doors. Then she marched back to where the two men remained standing and crossed her arms over her chest.

He settled back into the wicker chair and took a pen from his shirt pocket. The first paragraph on the form told him to take out his expired passport and examine it closely. Was it him the passport was describing? Was it him in the picture? There were two boxes, one with “yes” under it and one with “no.” Check a box, the form instructed.

He grew uneasy. He wasn’t a Negro with blue eyes. He wasn’t 7′ 9″ tall. And the picture–that was the Unabomber, and it had nothing to do with the statistics that went along with it.

He was at a loss for how to explain these discrepancies. It had been so long since he’d traveled. And where was it he wanted to go?

As if the form could read his mind, that was the next question: Where do you want to go? And why? Then there were three blank pages for him to write down his answer.

An alertness came over him. He wrote down Czech Republic and immediately regretted it. But how would it look if he scratched it out and wrote some other destination? He left it alone, and in answer to the question Why? he wrote “pleasure.”

But he knew now they would never renew his passport. He folded the application in thirds, stood up and stretched, and began walking toward the exit door. Just as he reached it he heard the lock click shut electronically, and on the far side he could hear the sound of men in combat boots rushing down the stairwell from the floor above.

Yesterday I rented a deluxe-model car, made reservations at the Hilton in Seattle, and reserved a table for dinner at Le Pichet. I’m trying to ease back into the swing of things, I haven’t left the valley in decades. When I try to remember what it’s like beyond the mountains, I draw a blank. I’m due in Prague for a promo tour for the translation of my drug book.

“It doesn’t feel right,” I said to Florica, the Gypsy woman I live with.

“So it would be difficult,” I said.

“Do you have a passport?”

She had me there. I’d gone down to renew my passport just last week and ran into difficulties. They attempted to detain me and triggered survival instincts I didn’t know I had.

Someone was out to get me. Someone had altered my expired passport that I keep locked in a wall safe along with my Tokarev pistol, $10,000 in cash and a cyanide pill. I didn’t realize it until I opened the passport in the courthouse passport office. My picture was gone and in its place was a picture of the Unabomber. That’s when I knew I had to get out of there and that’s when a SWAT team came crashing in and that’s when I went into action. It was like riding a bicycle, you never forget. I incapacitated all seven of them and sprinted out into the street.

The bed Florica and sleep in was disheveled. It was shortly before dawn. I took her head in my hands and stared into her dark eyes. “Was it you?” I said.

“Someone accessed my wall safe. Someone altered my passport. It was a professional job.”

“You wound my heart,” she said.

“Ah, my little thorn bush,” she said, and kissed my forehead. “I am the soul of you. We came here together many, many years ago. Why must you ask me again and again? Why do you doubt me?”

A rapid series of blurred images flashed thru my mind. I closed my eyes. “That was a dream,” I said. “We talk in dreams.” And yet where did I learn what I did to that SWAT team? And why do I have a wall safe with such odd items in it?”

“What about the night Oliver Stone came to the house?” Florica asked. We were walking the path along the river. We almost never go out in public together, and people we passed on the path gave us strange looks.

“It is one thing to believe everything that happened before you came to this valley was a dream, but Stone was here just three months ago, he came into the valley.”

I’ve begun to suspect Florica is the key to the dream mystery of my past. But then again, perhaps I am hiding from something. Perhaps I am delusional.

“And your drug book, did you dream that too?”

“Researched it,” she said in a sarcastic voice. And then she said something abrupt in a foreign language and I snapped out a response in that language.

“And did you dream up the ability to speak Romany?” she asked.

“And where did you study Sanskrit?” she said.

Something had changed in Florica. She was pulling back curtains I hadn’t been aware were there. She was backing me into a corner. She was trying to make something happen. I unzipped my down jacket and wiped my hand across my face. I was sweating all over.

“Why are you afraid of going to Prague?” she said.

“I am not afraid!” I said loudly. I’d shown my emotions, something I never did.

“Two reasons,” said Florica. “One, most of your book is fiction and you don’t want to be seen as a purveyor of second-hand experience. Two, people connected to the parts you left out of the book, parts that are real, may be waiting for you. And you don’t know if you still have what it would take to deal with them.”

“Damn your eyes!” I said with heat.

Things were coming together fast. There was a book hidden within the book. Or hidden by the book. The book he couldn’t write prodded him to write the book he wrote. But what prompted him to write a book at all? He was a man of few words and excessive action. And then he began to suspect that his face had undergone plastic surgery and he wasn’t who he saw in the mirror.

Jabony Welter. His name was Jabony Welter, but now it sounded foreign to him. Who was Jabony Welter? His driver’s license said he was, or the picture on the license was. Even his expired passport declared he was Jabony Welter, although nothing else fit, none of it, a description of a 7′ 9″ Negro with blue eyes alongside a picture of the Unabomber. Someone or some organization with cruel genius was doing everything in its power to keep him from finding out who he was, which meant that he was dangerous.

Florica was his only connection to his real self, and who’s to say that was a good thing, who’s to say she wasn’t put there to keep him from connecting to his past?

And why didn’t they come for him after he took out that SWAT team in the courthouse? He wasn’t wearing a mask, he wasn’t in disguise, everyone in the town knew him by his first name. It could only mean one thing: he hadn’t undergone plastic surgery, something more diabolical had been done to him, something on the cutting edge of identity modification–his face had been altered to appear different in different situations. When he looked in the mirror he saw Jabony Welter, when he was out in the streets doing his job as a meter reader he had the face of Jabony Welter, but when he showed up at the courthouse that day he had another face, his old face that no one in his new life recognized.

He knew what had to be done. He needed to see his old face in the mirror, and then everything would all fall into place.

That night he put a hand mirror under his pillow, and after they had made love he slipped the mirror into his right hand and cradled Florica’s head in the crook of his right arm. Then with his left hand he reached out and turned on the floor lamp next to the bed, simultaneously bringing his right hand up with the mirror in it. And there they were, two Gypsies, the most notorious hit team ever to walk the face of the earth.

“Yes,” he said, and he knew that either the next thing she said would explain why she’d gone along with this decades-long deception or he would snap her neck swiftly and without emotion.

“They took our son,” she said. “That’s why,” and it all came rushing back to him.

Their son was three when he was taken. He was now 28. He was no longer their son and no longer the chink in their armor. He was one the enemy now, and nothing stood in their way.

They flew out of Havana on falsified passports, landed in Budapest and arrived in Prague by bus after midnight. They hooked up with their connection, and by sunrise they had taken out the team that had been sent to eliminate them. That afternoon Jabony Welter read from his novel at a prominent bookstore, and afterward he signed books. People complimented him on his story, said it read as if it had really happened, even though a drug cartel of Vietnam vets bringing Pablo Escobar and the entire intelligence community of the United States to their knees was not the kind of thing that happened in real life.