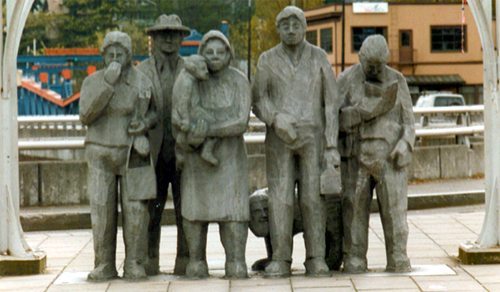 Waiting for the Interurban*

He stepped back and took a hard look. Then he stepped in again. No one noticed he’d been gone except a little girl who stared at him with her thumb in her mouth. He gave her the shhh sign, his index finger vertical across pursed lips, then raised his eyebrows.

They’d set up booths where petitions could be signed, and fifty high-school girls were conducting a survey from land lines provided by the local phone company. On spreadsheets they tallied responses and hang-ups.

A well-dressed gentleman appeared with a dachshund on a leash and a handsome middle-aged woman on his arm; they all stopped what they were doing and applauded. Their numbers seemed to swell, and the walls receded to accommodate them. The gentleman and the lady nodded and smiled.

He drifted into a war zone. Dead children lay everywhere. The little girl with whom he’d made the pact of silence frowned and turned away. A bell rang, and she ran into a red-brick school house that immediately vanished. When he looked back to the war zone, the children were being gathered up by soldiers and placed in canvas-covered trucks that drove into the mountains. The well-dressed gentleman and lady waved until the last truck was out of sight.

He moved on thru a vast video-game parlor filled with the sounds of combat. He stepped onto a ledge and looked down over hundreds of miles of crops emerging from the soil fully formed and ripe. Brown-skinned men and women in bright clothing fanned out thru the fields. They harvested the crops into appropriately labeled plastic containers that were then loaded into the same trucks that had carried off the children.

He stepped from the ledge into the city and waited at a bus stop. The people at the bus stop were a cross-section of the city’s population. No one moved or spoke. They stood side-by-side and looked straight ahead. His intuition told him that he should do the same. He had faith that the scene would eventually change, and then he would be able to move again without being detected.

He was beginning to get the hang of things, and he knew there was nothing more he could hope for.