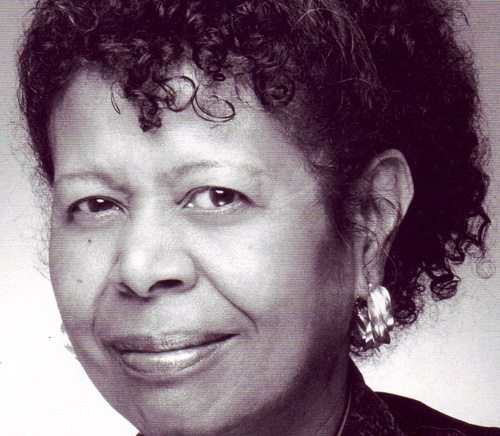 if the drum is a woman

“if the drum is a woman don’t abuse your drum”

Jayne Cortez searches for the fountain of truth along King’s Highway up King’s Mountain toward King’s Gravestone where the long arms of Africa & America meet & hang like “strange fruit”…”from a poplar tree” – she swings along that highway the way b.b. king & albert king & freddy king & sonny king & martin luther REX swing along frankie lymon blvd. & lose themselves on that long road that leads to a BIG WHITE HOUSE –

Suffering from jazzheimer’s i find it increasingly more difficult to cite my first encounters with certain folks, music etc. but to the best of my knowledge the first time i saw/met/heard Jayne Cortez was at the poetry project when she did a reading with my good friend Ted Joans (now also gone). Her visceral, bold in-your-face approach totally floored me though much of her work at the time put me off due to the rawness of its images, what i later referred to as externalizing the internal as in real BLOOD and GUTS, something i had only heard Cecil Taylor do but in an entirely different manner. After getting to know Jayne better and finding out she was Ornette Coleman’s wife early on (1954-1964) and the mother of Denardo Coleman, a drummer who had played on such Ornette lps as The Empty Foxhole (Bluenote) and Ornette at 12 (Impulse) when Denardo actually was 12 and who plays still with Ornette, we’d talk more and more particularly about one of her favorite subjects JAZZ. We’d meet often at gigs and hang out a bit. She was at this point and had been since 1975, married to the wonderful, soft spoken, huge presence of a man and one of my favorite sculptors, Melvin Edwards. They had met in the late ’60 or early ‘70 in southern california and were both part of the all important black arts movement that grew partially out of the infamous Watts riots. An early collaboration was Jayne’s 2nd book of poems from 1971, Festivals and Funerals for which Mel did the illustrations. They have collaborated ever since.

Jayne started a band called the Firespitters and gave me cds whenever she had new ones. She read fiercely and the band, in which Denardo also appeared along with many prominent musicians, played heavily behind her. Her poems ranged from social protest to feminism to jazz and one of the first i heard by her that solidified my admiration for her work was a poem about the great Cuban conga player Chano Pozo who helped in the development of Afro-Cuban jazz and who came to a tragic end. She never ceased to amaze me. Her work was timely and timeless. If the boys in Washington lied about the Debt Ceiling there’d be a poem about the edge of the cliff at her next reading.

We were fortunate to meet several times in Paris as well as New York and for my wife Yuko, Mel, Jayne and me, Ted Joans and jazz were 2 of the constants that kept our relationship fresh.

Jayne and Mel moved to their home away from home, Senegal where they lived a good part of the year and up until they moved to an NYU complex a few blocks from where Yuko and i live, they had lived around the corner from us, i, on Spring Street, they on 6th Ave. where ironically we shared the same numerical address.

In recent years Jayne, Yuko and i would sometimes have lunch or dinner. Mel would join when he could. i had turned them on to a Dominican rice and beans joint i really loved on the lower east side and turned Jayne on to a dish i particularly enjoyed, squid and black rice. After she passed away Mel called to relay the news and informed me that while in the hospital, where she abhorred the food, she would ask him to go to that restaurant and take food out for her. This both heartens and saddens me.

Though this may sound clichéd, Jayne was a force for good on the poetry, music and life scene that will sorely be missed and impossible to replace.

Jayne’s involvement with jazz, activism and feminism were extreme and can be felt on such poems as Chano Pozo, Everywhere Drums, Find Your Own Voice, You Can Be (what you want to be), Blues Bop for Diz and many more. Selected cds to listen to, all with excellent musicians, are Everywhere Drums (Bola Press), Find Your Own Voice (Bola Press) and Taking the Blues Back Home (Harmoldic/Verve). Many of her cds and books are on her own imprint Bola Press. Two wonderful examples of how she could combine her causes and loves are the political/ ecological poem Radiation Blues and one of her masterpieces aptly titled “If the Drum is a Woman” where she riffs off the Duke Ellington suite “The Drum is a Woman” combining, with no disrespect to Duke, the jazz idiom and her feminist consciousness. This piece in a way, encapsulates her ideals. Here are some lines from that poem which will be followed by part 2 of a short tribute “nursery rhyme” riff i wrote for Jayne’s passing called “If the Drum Were a Woman &…”