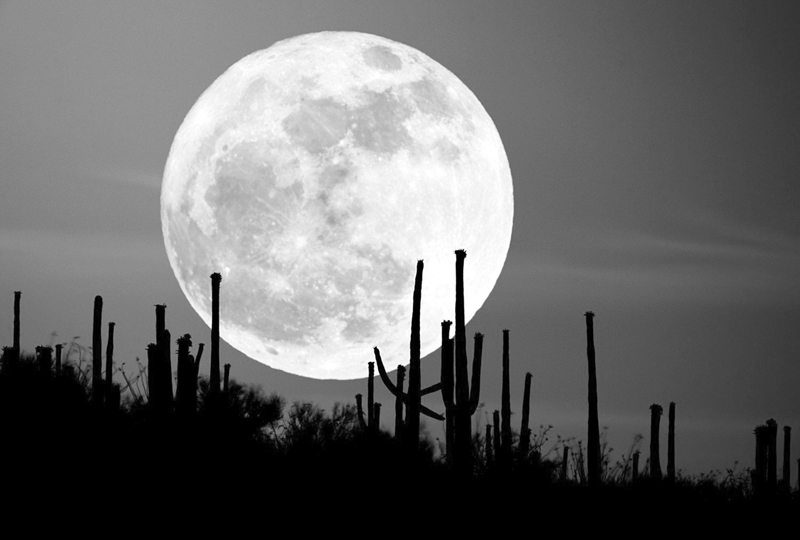 In the dream, he imagines the will
of some ancient god sent him
out at night to find the lost space
the empty room down the hall
the song trickling in the window
the one he can’t make out the name of
but knows, oh how he knows.

In the distance he sees lights
specks, pinpoints in the darkness.
He stops to stare at the dim reflection
of the broken yellow line chasing before and after.
On either side of the highway the dark
trees form a great hallway to the sky.
where so many stars are so hard to imagine,
where he tries to pick out what he remembers
when he was a kid, the North Star, the Big Dipper
Arcturus, the eyes of Taurus the bull.

Tonight Jupiter and Venus hang one over the other.
Mercury and Spica are closing in; they’ll
almost meet on tomorrow’s Harvest Moon.
Tonight he misses her musk, her breath at 4 A.M.
her shoes scattered on the bedroom rug
her underwear on every chair.

She just stopped, wouldn’t try.
and he knows he didn’t try hard enough.
He knows deep in the shadows of the highway
he’s safe from home, from her
from the lies, from himself.

He imagines her almost to Nevada
the blinking plane swings north just
south of Tahoe, then west to Oakland and down.
He sees her newly curled hair
her lips thin with fatigue.
A satellite crosses the zenith
and careens into nothing.

Headlights, then he hears the engine
close enough to hit him if he doesn’t move.
Suddenly he remembers mad sweaty faces, clinks
of endless sparkling gin, damp breasts, hot musk
frantic teeth flashing the dark then ever-swelling dawn.
And a safe childhood lawn before this, before
he couldn’t stand the sick of being sick and quit.
And even now, this dry moment doesn’t work.

Somewhere between the hole in his belly
an exquisite desire to just step out
on the highway under the awesome stars
fades, the pickup passes, its red lights shimmer
like a UFO in some childhood dream.
The smell of pennies and blood fill the air
and he thinks his lungs might burst.

He remembers driving past a man walking
the highway two hundred miles from nowhere.
For a second he swears he saw the whites of his eyes
flash in recognition as he passes.
He saw a car a few miles back.
Maybe it’s was his car, maybe he broke down.
He looked a little ragged walking in pitch black
for the nearest gas station that’s
closed no matter where it is.
For an instant he thinks maybe it was his father
but his father died years ago in the Albany VA
of sinus cancer, cigars, and drink
and he died without a face.

Nine miles later he thinks, God
he looked so damn lonely, maybe
I should have stopped, maybe I should
go back and drive him into town. He’s only a man,
just a tired man looking to get home. But he
doesn’t go back. Three days later on
his honeymoon in Ogonquit, Maine,
he awakens at 3.22 A.M. to the most beautiful
perfume he’s ever imagined. He rolls
over and looks at her. How lovely
she has become since they met. How she’s
grown on him like great mossy heat.

Just yesterday she seemed so young.
Look how smooth her skin is, her flat belly rises
and falls next to him, until the sound of
her soft breath breathing, almost makes him shudder.
Suddenly he remembers the man
who seemed like a ghost in another life.
Suddenly he thinks he hears music.
He springs out of bed and move silently
to the French windows, like air, like stardust.

He pushes both windows open and peers
into the endless night, that ends in the endless sea.
“I should have,” he says. And his bride
wakes with a start and sits up.
“What is it?” she asks. “Tell me. What is it?”
“Nothing,” he says. “I just should have.
Go to sleep. It’s nothing. Really nothing at all”

In his dream the man walks the shoulder of
the highway all night and when the sun rises
he is amazed at how free he feels, how hungry
he has become. Hundreds of cars pass
A semi almost blows him over.
Once he hears a fragment of an old hymn
so close, he almost turns back.
Occasionally he raises his right hand
to wave someone down, but thinks better of it.

At noon he walks through one small
village where a gas station attendant shoots him a fish eye.
He’s forgotten to eat and no longer has an ache.
It seems it all happened somewhere else
the endless love, the dark, the tin
thumping of his heart, the job he can’t
remember the name of, the names of stars
a wish for clean socks, headaches,
tender hands, telephones, all of it
lost in the long stretch ahead.

One Reply to “Highwayman by David Plumb”