Just off the coast of North Vietnam
we took six prisoners, stripped them naked
on the teakwood deck of our U.S.S. Newport News,
the largest cruiser in the fleet with its nine, eight inch rapid-fire guns.
They stood small and shivering, shitting down their legs
while the sharks tore their comrades to shreds below
and when I leaned over the side, a piece of man
floated by still alive until the big blue
sunk it’s jaws into a shoulder and shook him like a rag doll
tearing off ragged flesh while the screams screamed
terror I’d never heard before, but then a
Chief Boatswain nearby, was quick to say,
“He must have been an ensign.
He’s got his ass eaten out.”
And I looked toward the North Vietnam shoreline
thinking, if this is it, maybe jump in
give up, then I watched the sharks
slash and tear and eat and swim. 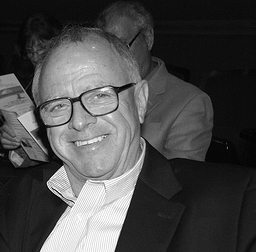 David Plumb about David Plumb. I grew up in North Adams, Massachusetts and attended Syracuse University. I worked as a medical technician, paramedic and laboratory technician during those years, but I found myself attracted to writing and literature. One evening I went to a party where someone was reading Lawrence Ferlinghetti’s Coney Island of the Mind. It changed my life forever. After my tour as a U.S. Naval Officer in Vietnam, I rented a farmhouse in upstate New York, where I worked in a slaughterhouse for not enough cash and all the heart and tongue I could take home. Then I worked and hitchhiked my way to San Francisco.

In San Francisco, I went to printing school and published Journal 31, directed the Intersection Poetry Series and worked a series of jobs to maintain my writing. I taught Fiction Writing at the University of California, Berkeley and Fort Mason Center for the Arts. I have acted in Hollywood films as Fat Man, Little Boy and Tucker. I was Development Assistant for Women in Distress in San Francisco and later Director of a homeless shelter in Pompano Florida. I drove cab for 5 years.. One of my fondest achievements is my teaching career. I taught Poetry in the Schools California and expedited the Northern California Poetry in the Schools Handbook. In 1991, I was one of 48 people in the world to present at the first International Conference on Literature and Addiction at The University of Sheffield, UK. The presentation essay was published in Beyond the Pleasure Dome, University of Sheffield Press.

Writing has appeared in The Washington Post, The Miami Herald, Avatar, Outlaw Poetry Network ,Gargoyle, Cars Anthology-MSR Blue Collar review, Homeless Not Helpless Anthology, I have performed on National Public Radio, PR, Miami, Florida-Channel 26, Coconut Creek, Florida-The Muse is You, The Magenta Hotel, novella KSFU, Fiction Reading and KPFA, Kerouac, The Man and the Legend. Will Rogers said, “Live in such a way that you would not be ashamed to sell your parrot to the town gossip.” I say, “It depends on the parrot.”