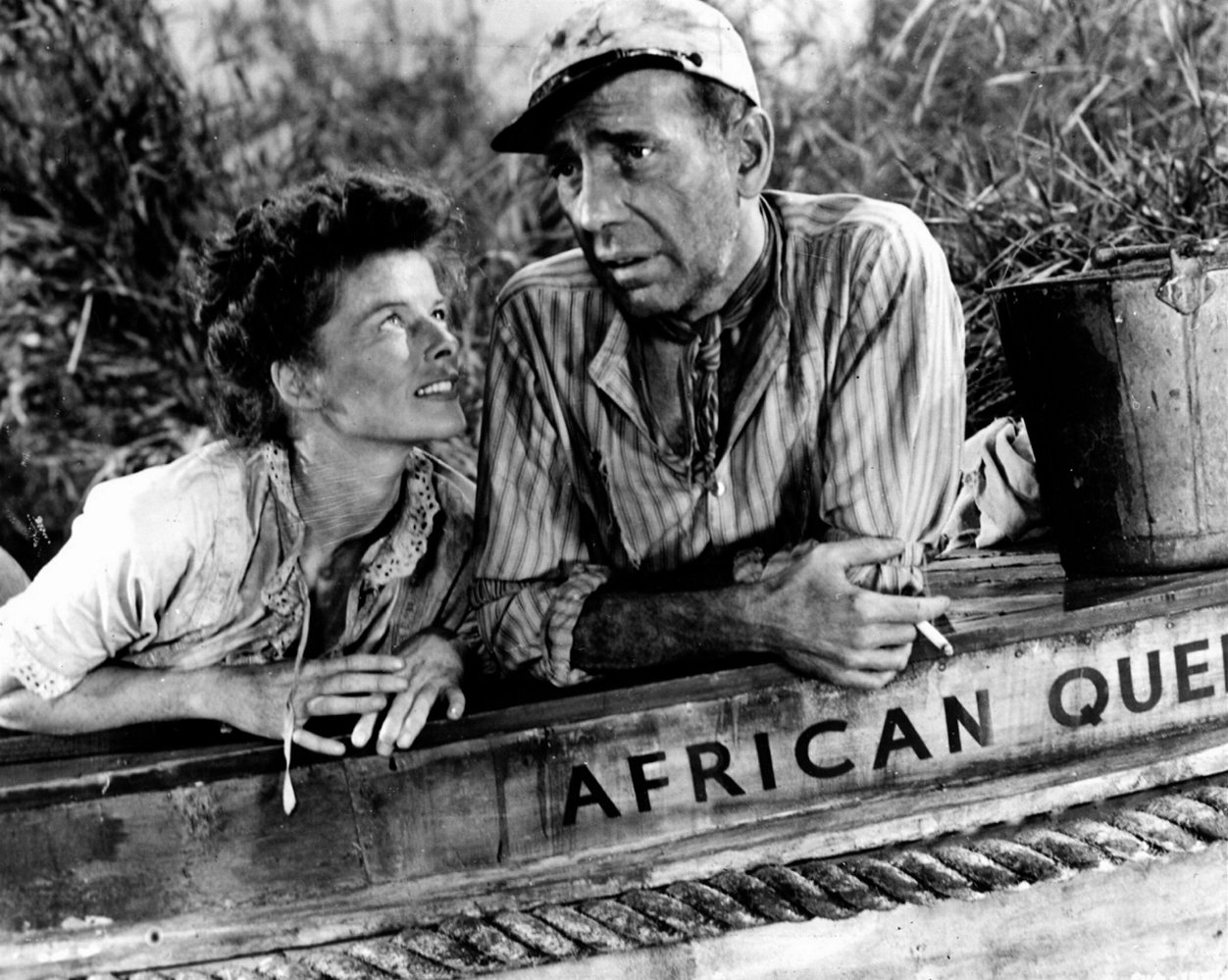 I hear the chuff of a boat engine
and wonder if Bogey will save
Katharine Hepburn from the Nazis.
That engine competed with Bogey’s
bowel sounds, the grinding gurgle
of his coffee maker, and the drum
of life’s jungle.

Kate was such a sweet prude
in that movie; as pure and naïve
as we all are when we start out.
We divide and divide until
we reach the tragically common
denominator that becomes us:

Reduce to the crude and smelly Bogey-alcoholic,
who knows how to survive, or take
to the cloth, like Kate’s brother in the movie,
commune with the Sky Daddy who’s numbered
our days and counts the hairs on our heads
(and I thought counting pie tins at inventory time
at my mother’s restaurant supply business was boring).
We will, of course, ignore Jim Harrison’s question,
“If the afterlife is so wonderful why did Jesus
bother bringing Lazarus back from the dead?”

Maybe we garner a blessing here
or there, settle, get along like Kate,
follow our reason, respect elders
and tradition, love when we can,
become a soul-universe, a force
that endures, persists—knows
how to sing a hymn over a friend,
how to make death less lonely.

He keeps his AR-15 clean.
He’s careful with the brushes,
his long shafted cleaning rod,
his bore guide, and the solvents.
When he disassembles
he keeps the pieces in order
or else he can’t reassemble correctly.
So many things can go wrong.
It’s star wars and he’s the star—
in the land of…
and the home of… .
He wraps himself in the flag,
curls up on a futon,
sticks the gun in his mouth,
it tastes good, like copper,
like blood. His mother, father,
brother, drill instructor,
taught him how to shoot.
He knows how to kill.
He’s good at it, in fact,
it’s all he was ever good at.
Doors open for him.
He knows where he’s going.
He walks into the mall,
the movie theater,
the grade school,
the high school,
the college campus.
It’s the fourth of July
only louder. People
scream and scatter.
He is somebody.
He’s an American.

“A man goes far to find out what he is.”
Theodore Roethke

There’s the lady who found out
that she is 27% Cherokee.
I mean, whoopee!
She’s so happy that she now
collects Native pottery.

There’s the man who thought
he was German, wore lederhosen,
looked like a grim fairytale,
only to discover he’s Italian.
Now he craves pasta and practices
how to talk with his hands.

As for me, I don’t need a website
to tell me who I am. I got drunk
every weekend for years, was on
intimate terms with Kohler’s porcelain.
Clearly, I was 90% Irish.
When I quit drinking I had tea,
toast, and marmalade every morning
for breakfast—discovered my English roots.

Now I smell the sweet perfume of decay,
watch leaves skitter across prairie,
lake waves run after each other
from the west, let the wind symphony
my ears, caress my face, my hands.
I know that my true ancestors are
seasons of earth, stone, and pulse of
Harmonia—the song of opposites
Heraclitus heard so long ago,
the cadenza near the end
of our cosmic concerto.

Rime coats every branch
of every tree, a frosting spread
evenly along the asphalt by
some god’s hand. The world
seems covered in diamonds.

How can something this beautiful
be so treacherous? What attracts
often kills. Long dark barrels,
the smell of nitroglycerine
on the firing range, the roar

of sixty bullets a minute—
the physiognomy of power.
A story as old as the apple
in the garden, this time the slimy
serpent a twenty-four hour news cycle

(with ratings-driven “empathy”
for the murdered) that provokes
a pissed-off professional victim
to punish those he thinks more
fortunate than himself. Meanwhile

the NRA, a tiny organization awash
in money, slathers our nation with
propaganda that makes us slip while
standing still, as if on a sidewalk
during an ice storm.

With thanks to Billy Collins for his poem, “The Lanyard”

The Town Crier runs through the streets,
announces that the Poetry Book Parade
is about to begin. “Here come the books!”
He exclaims, and tosses rose petals
behind him for the tomes to march on.

The books sprout little arms, legs,
and Walt Disney mouths. “Here I am,”
declaim some sonnets, “Buy me!”

“There was an old man in a tree,”
guffaws a volume of limericks, “buy me!”

“I’m deep, dour, and dank,” says a book
with a black cover. “I’m not for sale unless
you have money and are alive! Buy me!”

“I’ve been telling a joke for forty years,”
yells a crimson colored cover. “Only
the editor of the New Yorker gets it!”
His is a hardy laugh. “Buy me!”

A mother in the midst of feeding
her infant rushes out of her house
to buy some sestinas. Her husband,
a decent bloke, abandons his car,
he’ll be late for work; no matter,
his favorite pantoums are marching by—
he must have them! Children
gladly give up their lunch money
to purchase a collection of villanelles.
Fights break out over who will get the haiku!

Pardon me for exposing the fantasies behind
the faux-humility of poets who condemn us
for marketing our work—fantasies of self-
designated superior beings who decry self-
promotion then moan and whine that
no one reads poetry anymore.

I hate to be the one to break the news,
but there are two kinds of poets:
obscure unknown poets
and known unknown poets.
I wish to dwell among the latter.

Someone I thought was a friend sent
an email: “You embarrass yourself,”
he wrote, “letting us know every time
you get published in some little magazine.
Take me off your email list,” he puffed.

“I’m sorry you feel that way,” I replied,
and I was sorry, but not for me.
I was sorry for him—someone who
thought a bird should fly but not sing,
a guy who has written a few wonderful
poems known to only a handful of us
because of his adversity to publicity.

He wears his obscurity proudly
round his neck like a lanyard
made as a child in summer camp but,
unlike Billy Collins, not given to his mother,
who nursed Billy through disease
and gave him language, but reserved solely
for my former friend himself—
an insignificance fettered so tightly
it will eventually choke him to death,
though hardly anyone will know, or care.

The Smell of Home in Wyoming

Joe taught me to keep my hand totally flat
when offering an oat cake to his horse.
O the whiskery caress of Baldy’s lips
against my palm. Hay in the barn,
the smell of home in Wyoming.
I was eight years old.

Al, Joe’s dad, taught me never to walk
behind a horse without patting its butt
to let it know you were there. Still
Spot, a feisty pinto, kicked Al once,
smashed him up against the stall wall.
Al whacked spot hard on his rear
and swore. He had no fear.

One time Al wrapped Joe and me
in blankets, Indian style, and put us
on horses in a driving snow storm.
Huge flakes feathered the prairie.
Warm horse fragrance, creek of leather
saddle, breath mist before us—
a synesthetic crash of beauty.

And now, Al gone, Joe gone. I’m the only
one left. There’s no one to hear this poem. 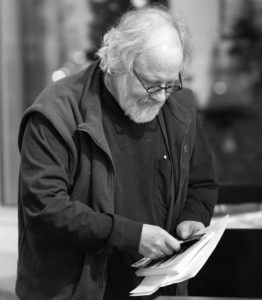 Charles W. Brice. I am a retired psychoanalyst living in Pittsburgh. My full length poetry collection, Flashcuts Out of Chaos, is published by WordTech Editions (2016) and my second collection, Mnemosyne’s Hand (WordTech Editions), will appear in 2018. My poetry has been nominated for a Pushcart Prize and has appeared in The Atlanta Review, Hawaii Review, The Main Street Rag, Chiron Review, The Dunes Review, SLAB, Fifth Wednesday Journal, Sport Literate, The Paterson Literary Review, Plainsong, and elsewhere.