In a sense, every highway in America is a skull highway. Every back road is a splintered piece of that brainpan, a sheared off part of that bone. Lawrence Welsh’s SKULL HIGHWAY, La Alameda Press, 12 dollars, in certain ways reminds me of nineteenth century instruction manuals for settlers traveling west. The major difference is that Welsh has somehow codified the instructions into rituals for encountering the west, specifically the Southwest. But, most of all, Welsh has given us perilous ways of seeing.

Imagine Ikkyu condensing a chapter on how to read the clouds on the Santa Fe Trail down to two lines.

lone moon no clouds
we stumble through the night

from: CROW WITH NO MOUTH

Welsh’s poems aren’t that spare, but they work toward that kind of spareness.

what flames
through coyote

A poem like “New Medicine Stick” conjures the energy for the entire book and announces a set of pared down rhythms that Welsh skillfully employs throughout these poems. I can’t help but be reminded of other voices here. First, that of Robert Creeley. While this poem and the ones that follow don’t have that totally shortline Creeley look, they somehow carry his signature echoes. However, they are also a step away from Creeley heading toward something else. Some idiosyncratic style that really belongs to Welsh. It is also interesting to note that Welsh’s reverence for the land, especially the Southwest, reminds me of Gary Snyder’s feel for the Pacific Northwest. We all have our poetic fathers; we can’t escape them. And, anyone who adopts such a way of seeing the land invites comparison with Snyder. Beyond this superficial comparison, there is something uniquely Welsh’s which is demonstrated in the title poem.

get it and know
from the bridge

the vestiges of bone
scattered off
the interstate:

hands and heads
stuck in steel

the cutters cutting
the blackened holes:

lanes of regret
lanes of possibility
lanes of eternal light

This poem really is one of the keys to the entire book. Skull Highway is not just a place on the grid. It is the grid. When Welsh writes, “get it and know/from the bridge” he is letting us know that he not only understands the topography of the landscape but he also knows the topography of poetry as well. You can’t write ‘the bridge’ without somehow also invoking Hart Crane’s THE BRIDGE. And once you understand that kind of resonance in this poem, you ‘get it’ about everything else, too. Both SKULL HIGHWAY, the book and the poem, become ways of traveling into a mythic interior, ways of comprehending the Southwest as something more than just a place on the map, a destination. By closing this poem with these three lines, “lanes of regret/lanes of possibility/lanes of eternal light,” Welsh is announcing that this poem is a signal for larger intentions. Welsh’s Skull Highway takes the reader on a roundabout route to the West Coast, in this case, surfer country with poems like “Culver’s End,” “For Robert Peters,” “New Years’ Eve 1978,” and “Hoover & 48th.” While these are good poems and demonstrate how a highway can be circuitous, they feel like a distraction, a disruption in the flow of the book. They might have been placed at the beginning as a kind of prologue or even at the end as Welsh’s way of looking back at where he had been. Even so, SKULL HIGHWAY opens up all kinds of possibilities for Welsh. Poems such as “Adobe,” “Mesa Hill,” “Gone Rattler,” definitely suggest wider horizons, longer dreams

“Preparing For Maximus,” is one of maybe half a dozen poems in this collection which speak dramatically to other poems. Because both Olson and Duncan are mentioned in the poem, it conjures Black Mountain, it calls strangely for the energy of THE MAXIMUS POEMS, and it teases the reader with the idea that Welsh is working toward the kind of long poem that both Charles Olson and Robert Duncan also worked at. Just who is “Preparing For Maximus?” The answer is obvious. I think Lawrence Welsh is.

The poem “A Light,” also teases with its slightly longer format. At a hundred plus lines it hints at becoming even longer. It is haunting with its shape shifting doves, its gone buffalo, its ritual of tobacco and sage, owl eyes, dancing crow, bear tooth. This short catalog might be the contents of a medicine bag. At any rate, the poem works both as mystery rite and healing ritual. I love it for the visceral feel of these things, its minimal look, and the way it remains mysterious, undaunted, unexplained.

If “New Medicine Stick,” the first poem in the book, is a conjuring of energy, then the last poem is a letting go of that energy.

In The Desert
Dead Things Go Away Quickly

what a great
place
to end
i thought

so clean
so little blood
the gone bones
by sunrise

This poem has a cleanness, a spareness, and a stark simplicity that, as far as I am concerned are unequaled in most poetry about the Southwest. In fact, it transcends most of the poems that so patently try to be Southwestern and by reason of its quietly simple way of seeing things becomes universal. It has as good a feel to it as any of the shorter poems by William Carlos Williams. It reminds me of the beautifully minimal way that Georgia O’Keeffe painted buffalo skulls and doorways. I can get lost in her doorways, I get lost in her mountains.

And, this is where SKULL HIGHWAY leads. 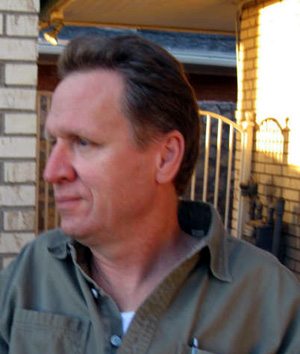 Poet and editor Naomi Shihab Nye has featured his work in The Texas Observer, and the Los Angeles Daily Journal has called him “one of America’s leading writers on life in border towns.” Kathleene West, poetry editor of Puerto del Sol, has also lauded his work, noting: “It’s getting harder and harder to pull off poems with Southwest imagery, but Lawrence Welsh has worked form, content and diction to make it all new again.” Welsh has served as a writer-in-residence at a wide range of schools and organizations, including the Border Book Festival in Las Cruces, New Mexico, and at the Booker T. Washington School for the Visual and Performing Arts in Dallas. A winner of The Bardsong Press Celtic Voice Writing Award in Poetry, Welsh is an associate professor of English at El Paso Community College. A former guest lecturer at UCLA, he has also taught at the University of Texas at El Paso and the Southern New Mexico penitentiary. From 1995-97, he served as poetry editor of the Rio Grande Review. A nationally known spoken word artist, Welsh has given more than 50 readings during the past 10 years in Mexico, New Mexico, Texas, California and Kansas, and he continues to conduct writing workshops throughout the Southwest. He has won numerous journalism awards, including the Society of Professional Journalists Bill Farr Reporting Award, the Copley Los Angeles Newspapers Award, the Women in Communications Endowment Award and the Jessie Steensma Scholarship. In 1992, the YMCA named him man of the year for his community service in South Central Los Angeles. Welsh is married to Lisa McNiel, a poet and teacher, and they have two young children, Megan and Patrick. 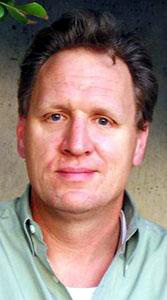 The highway first brought Lawrence Welsh to El Paso in 1989, when he hitchhiked to New Mexico and Texas from Los Angeles, where he was a prize-winning journalist and had co-founded the punk rock band The Alcoholics. Five years later, he moved here and embraced his dream of working as a poet.

His newest book, “Skull Highway” (La Alameda Press), features the austere beauty of the Southwestern landscape he now calls home, and the highways, both actual and metaphysical, that cross the Chihuahuan Desert, as well as the grittiness of the streets of Southern California.

In the poem “Norton Flats,” Welsh’s vivid imagery evokes desert life in recognizable terms: “… just sand, yucca / rambler’s stone // a ’38 chevrolet … the sun / the bullets // on blackened glass.” The poem “Skull Highway” resonates like a mission bell tolling news of a death: “… the vestige of bone / scattered off / the interstate: // … the blackened holes // lanes of regret / lanes of possibility / lanes of eternal light.”

Born and raised in south-central Los Angeles, Welsh is first-generation Irish-American, and the musicality and passion of his poetry are true to his roots in a culture that has revered and respected word weavers since prehistoric times. Welsh’s place in that tradition was recognized when The Bardsong Press awarded him the Celtic Voice Writing Award in Poetry.

His work with the band The Alcoholics made him a seminal member of the Los Angeles punk rock community. Artifix Records has recognized this by releasing a full-length 30-year retrospective of the band this year titled “The Alcoholics: East of Sepulveda, West of the Row.” His experience as a musician, including a deep love and knowledge of jazz, informs his poetry, which has a rhythm and musicality reinforced by Welsh’s delivery in his live performances, again marking his place in the oral history traditions of Irish poetry.

Welsh’s poetry is firmly grounded in the geography and vernacular of the Southwestern United States. In “Milagros,” he writes, “… we become / vestiges / of pictured / fate: rusted steel / too gone / for the polisher’s knife.” Welsh, now 50 and an associate professor of literature at El Paso Community College, has said he never expected to live past 25. His book recognizes his own eventual mortality, and the loss of friends along the road.

In “the eve,” Welsh writes: “those flown / become // birds // a blood’s religion / an inspired knife.” In “Troubadour West,” he recognizes the dead end he may have faced but for going to college and becoming a writer: “… old punk pedigree / speaks / tales. all / (now)? / faded / smoking // transient’s pipe / and song.”

“Skull Highway” is the sixth of Welsh’s published collections; the earlier ones are “Walking Backwards to Santa Fe,” “Believing in Bonfires,” “New Shouts at Broken Dreams,” “Rusted Steel and Bordertown Starts” and “Lenny Bruce in El Paso.” A seventh book, “Carney Takedown,” is forthcoming in 2010 from Unlikely Books.

Note: Donna Snyder, the founder of Tumblewords Project, is an El Paso writer and poet whose works have been widely published. This Donna Snyder article first appeared in the EL PASO TIMES on May 31, 2009.