began as a quarterly but after a year I realized that wasn’t exactly realistic. Then it came out a couple of times a year. I started publishing Road/house in 1975 and it was a magazine for about eight issues. When it was no longer possible to bring Road/house out as a magazine I started publishing chapbooks. Usually they consisted of either one or two eight and a half pages folded and printed as zerox. This was around 1979 and I did this through the 80s and sporadically into the 90s. I rarely bring out chapbooks this way anymore Though once in awhile I’ll give3 it a shot. Writers are: Alan Catlin, Ann Mennebroker, Patrick McKinnon, David Spicer, Michael Hemmingson, and many others. Todd Moore 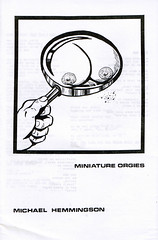 The year was 1975. I’d been writing poetry for about six years, had a few poems published here and there, was just really getting started on DILLINGER and realized that if I was going to remain in the small press for the long haul I needed a press of my own. The mid seventies were the tag end days of the mimeo revolution. The idea had been floating around in my head that all I really needed was a banged up mimeograph, a ream of paper, and a handful of hard edged poems and I was in business. Just about that time I was telling a friend of mine, Cliff Spaine who was the minister of theUniversity Methodist Church, as well as someone who had played a big part in the peace movement of the late sixties and early seventies. And, he said, why don’t you put together an issue and I’ll have my secretary type it up and lay it out. Then all you have to do is take it to a printer. I said will there be a problem with language. He said, language will never be a problem. The only real problem was the secretary who was a terrible typist. But, I could hardly complain. Even with the typos, Roadhouse became something of a small press legend. 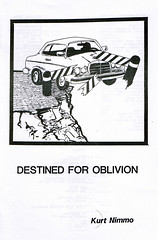 And, Road/house might also be spelled with a small r. It depended on how I felt at the time. And, roadhouse might be separated by a slash, road/house. Again, it just depended on my mood. I guess it was my way of trying to keep Road/house from becoming predictable. The poets who appeared there are like a roster of the small press famous as well as not so famous. I published poems by Albert Goldbarth, Gerald Locklin, Lyn Lifshin, Dennis Gulling, Michael C. Ford, and Thomas McGrath. It was just by luck that I was able to talk McGrath into sending me something. I wrote and told him how much I loved LETTER TO AN IMAGINARY FRIEND and that did the trick.

Road/house lasted for four years as a magazine. In 1979 I finally folded the zine but decided I was going to hold onto the name and make it into a very minimal zerox press. My friend Dennis Gulling had been bringing out minimal zeroxed chapbooks for several years under the Crawlspace imprint, so I thought, why not? What I did was use either one or two typewriter sized sheets of paper, turn them sideways like book pages, lay them out with poems, zerox them, either staple the sheets together or not and give these chapbooks away. It was a form of guerilla or street publication. While the large presses were bringing out all these fancy, perfect bound books of mostly mediocre poetry, I decided why not try to publish the very best small press poetry as giveaway. It wasn’t an idea that was original with me, but Ithink I gave the concept an extra hard edged look. 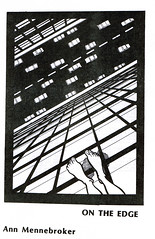 Chapbook covers, for me, were an important part of a publication. Even when I was doing Road/house as a magazine, I tried to find interesting old photographs to illustrate the cover. And, when I couldn’t find photographs, I’d use good line drawings that Dennis Gulling’s friend Bruce Quast was more than willing to supply. One of Quast’s classic designs was for a chapbook of mine called DOA or dead on arrival. The drawing shows a car driving down the highway. Everything about it looks perfectly normal except for the arm coming out of the trunk. For Ann Menebroker’s chapbook, ON THE EDGE, I used a Bruce Quast drawing of a pair of feet poised on a ledge. The shot is looking down at the cars going by on the street. For Tony Moffeit’s chapbook OUTLAW BLUES I used a Bruce Quast drawing of a man with a guitar. For Kurt Nimmo’s chapbook, DESTINED FOR OBLIVION, I used a Bruce Quast illustration of a car going through a guardrail and off a cliff. I have always loved the well done line drawing or the classic snapshot of a corpse or a man with a gun. The best small press illustrated covers are those that are recycled photos, movie stills, comic book illustrations, book photos and illustrations ripped out and collaged. As recently as 2006, I brought out a one page foldup mini chap called OUTLAW. I listed the publisher as High Sierra but it is classic Road/house in the way it was laid out and zeroxed. In the chapbooks that I publish, I don’t want the perfectly printed page. I want the poems to be laid out a little crooked, I want the cover to look more than a little grainy, I want the whole thing to have a hands on look, the appearance of having been actually made my a human being instead of a computer or a machine. That’s why Road/house chapbooks are what they are. They are little jagged pieces of my psychic history. Each one has a kind of razor blade look. Imagine Weegee doing chapbooks of poetry rather than snapshots of street murders. 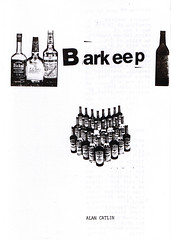 I need to take a moment and give Dennis Gulling the kind of credit he deserves. He started Crawlspace sometime in the late seventies. I am not sure when he published his first issue of the magazine Crawlspace but it was one of those breakthrough efforts that needs some recognition. I’ve always admired his pared down vision and the visual way that he edited both Crawlspace as a magazine and then as a press. And, I also need to mention that many times we brought out the work of other poets as well as our own books as joint Crawlspace Road/house efforts. Both Gulling’s contributions as an editor and as a poet have been felt in the small press, but have not been fully credited to him. At least, until now.

Mostly, I’ve never considered myself a visual artist. I’m primarily a poet but when I have to I can do visual art. For OUTLAW I tore a page out of a Sam Peckinpah filmography which had Steve McQueen pointing a 45 auto. It’s a movie still from the film THE GETAWAY. McQueen’s propped up on a bed with his shirt partly unbuttoned and it looks as though he is pointing the pistol at the reader.. What I did was recreate my own take on this image by cutting out pieces of Dillinger’s face and gluing those features to McQueen’s face. I also used a black ballpoint pen to ink over McQueen’s glasses. The effect has an eerie feel to it. McQueen is wearing Dillinger’s mouth and one of Dillinger’s eyes becomes McQueen’s third eye. Then on the back cover I put Dillinger’s other eye over the credit for the cover. It’s probably the best collage that I’ve ever done. 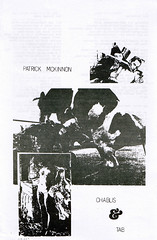 I’m not sure if Road/house ever set any trends or changed anything in the small press, but it was always there for me. Road/house was potentially a forum though I rarely used it as a forum. More often than not, I used my press to promote the best small press poetry I could find. And, I also used it to publish my own work when I couldn’t find another press to bring my work out. But, I was always careful about publishing anyone’s work. As far as I was concerned a chapbook had to be a honed down collection where the individual parts all contributed toward a whole. It could be as short as four or six poems or it could be as many as sixteen to twenty poems. But they had to work almost all of a piece. The best chapbooks of all are those which flow like a well made tv movie or like a big screen movie. They had to segue smoothly into each other and they had to somehow talk to each other or they were just another thrown together batch of stuff and there are plenty of chapbooks out there that are really nothing more than poems scooped randomly off a floor near someone’s desk, hurriedly typed, and then published. That never worked for me. Though I do admit I occasionally worked that game, if I was under pressure to get a book of mine out. Even when I was editing 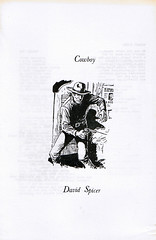 some of the earlier numbers of Road/house, I tried though not always successfully for some kind of theme running through the entire issue. It doesn’t matter if you are handing a chapbook or magazine out in a bar or at a poetry reading. It doesn’t matter if you put the chap together as cheaply as possible. If the chapbook isn’t tightly edited with an eye to both print and the visual aspect of the thing as well, then it’s just an exercise in futility. The one thing I learned, while editing those early issues of Road/house, was how to put a book together. Call it editing, call it learning how to see as well as to read a poem. It really doesn’t matter. The best chapbooks, even those that are cheaply produced, if they are done well, become works of art.

The best movies of the forties were films like HIGH SIERRA, CASABLANCA, THE BIG SLEEP, DOUBLE INDEMNITY, THE TREASURE OF THE SIERRA MADRE, WHITE HEAT, THE ASPHALT JUNGLE, they had that shadowy black and white look to them. Many of these films were called B movies. That’s the look I have always loved in chapbooks. And, that’s the look I dream of. I think I published some of the best B movie chapbooks around. And, if Road/house is remembered for nothing else, it should be remembered for its classic noir look.

I think it’s a look that will never go away.