I remember getting hit once with a baseball bat right in the middle of the back and the force of that blow spun me around toward a girl who was laughing. Sometimes a book will have that same effect on me. Reading Tom McGrath’s LETTER TO AN IMAGINARY FRIEND was like that. It was years ago. I was sitting in a shot and beer joint, some back booth, eating a burger with the blood and grease pouring out on my plate, and the beer tasted good and cold and I read that first page of LETTER and was hooked on McGrath. For me, reading poetry is personal and visceral, up close, in your face, mano a mano, like a fist in the eye. 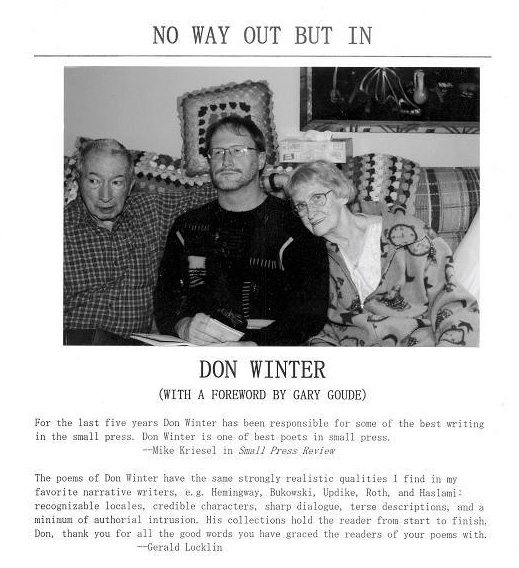 Don Winter’s poetry hits me like that. I didn’t know much about his work until I read NO WAY OUT BUT IN, Working Stiff Press, 2008. The format itself is nothing to speak of. Maybe twenty pages or so, eight and a half by eleven, the print font is typewriter graphics, the cover a color snapshot of I assume his mother and father sitting on a sofa with Winter in the middle. She has her head cushioned affectionately on his shoulder. The chapbook is side stapled and then duct taped over. Something about the unpretentious way it was put together made me like it immediately. I liked it because it was a kind of fuck you way of saying I’m a little beaten up but I am still standing. I reviewed that chapbook the same day I got it because I had to. There are some books and that just seem to reach over, grab you by the shirt front, and there is nothing you can do but read them.

The same thing happened to me when I grabbed SATURDAY NIGHT DESPERATE out of the mailbox. The second I ripped the envelope open I knew I had to read it. I not only knew I had to read it, but I also had to start writing about it even while I was reading because I know Don Winter’s poetry and it’s the kind of stuff I go for. The same thing happens whenever I read a new Gary Goude poem or a new Ben Smith poem or a new John Yamrus poem or a new Ron Androla poem or a new Mark Weber poem or a new Milner Place poem. What I know more than anything else is that this is going to be a poem that is essential, vital, real and when I come away from reading it, it will be like walking out of a really good movie that I hated to see come to an end.

SATURDAY NIGHT DESPERATE , Working Stiff Press, 2009, is a working man’s selected, gathering the best of Don Winter from 1999-2009. It’s not hardcover, it’s not even glossy paperback. Instead, this is folded and stapled and stark black and white, definitely nailgun noir, bar whiskey jagged.

Mornings we ripped
shingles. When air temp topped
body temp we got buzzed.
We sat and smoked.

“I’d get monkeys
to do your jobs
if I could teach them not to shit
on the roof,” boss yelled.

We laughed like struck
match sticks. Down in the street
sheets just hung there on the line
like movie screens.

Winter understands the down and out world of the working man. “In Niles, Michigan, the working class town where I grew up, you were educated (euphemism for ‘socially managed’) for docility: conformity to the rules, obedience to authority, and receptivity to rote learning.” From Press of the Real: Poetry of the Working Class. Author’s Introduction.

During his 23 years here,
on each one
he curls ketchup
into a mouth,
places two pickles
for eyes, two lines
of mustard for eyebrows.
The onion bits,
he says,
are pimples.

We watch him
leave alone after
work, come in the same
time each morning,
take his break
by himself, always the same
station blaring.

We watch him
finish off
each face with a top hat, mash
the condiments together,
bury each one
in a thin, wax box.
All those little white caskets
on the greasy steel rack.

To open the door
you had to pound
just below the handle.

When you turned a corner
the dash lights flickered
like a busted marquee.

The rolling noise
that charmed Vera
was a can of Budweiser
under her seat.

Night we split up,
she held my erection
& looked out the window
like someone
with a hand on a doorknob
stopping to say one last thing
before goodbye.

On the inside of the back cover there are these words:

From 1999-2009 Don Winters’ poems appeared in most small press (and many academic press) journals. He is off to discover a new path.

I could be very wrong and totally off base, but my take here is this book is Don Winter’s path, past present and future and he would be betraying himself along with Tom McGrath and Charles Bukowski and Gary Goude and John Yamrus and everyone else who put his own blood on the line for the line if he strayed from it. In his introduction, Winter tells a story about McGrath dying in a single room wearing a black mitten on a hand that he could not keep warm after it had received surgery. In some larger more important way, once you start writing poetry you put on that black mitten and you can never take it off.

Much more on Don Winter can be found here… and here…